The 55-kilometre crossing, which includes a snaking road bridge and underwater tunnel, links Hong Kong’s Lantau island to Zhuhai and the gambling enclave of Macau, across the waters of the Pearl River Estuary.

Critics say the multibillion-dollar bridge is one more way to integrate Hong Kong into China as fears grow that the city’s cherished freedoms are being eroded.

The mega bridge will open to traffic on Wednesday, a day after the ceremony. Building began in 2009 and has been dogged by delays, budget overruns, corruption prosecutions and the deaths of construction workers.

The launch ceremony was hastily announced last week by mainland authorities with Hong Kong politicians and transport companies complaining they had been left in the dark.

Supporters of the project promote it as an engineering marvel that will also boost business and cut travel time, while others see it as a politically driven and costly “white elephant.”

Is it open to everyone??

No. Special permits must be obtained to cross, allocated by a quota system. All vehicles must pay a toll.

The bridge is not served by public transport, so private shuttle busses will also be on route. Drivers of private cars will be able to use it if they successfully apply for a special permit.

Hong Kong residents will only be granted a license to cross into Zhuhai by car if they meet highly selective criteria, including holding certain mainland government positions or making major contributions to charities in the southern Chinese province of Guangdong.

Hong Kong residents have criticised the bridge saying it’s a waste of tax payer funds. And conservationists say the construction has led to falling numbers of the threatened Chinese white dolphin.

“The bridge of death” at least nine workers have died on the Hong Kong side, and nine more on the mainland. And hundreds injured during construction. 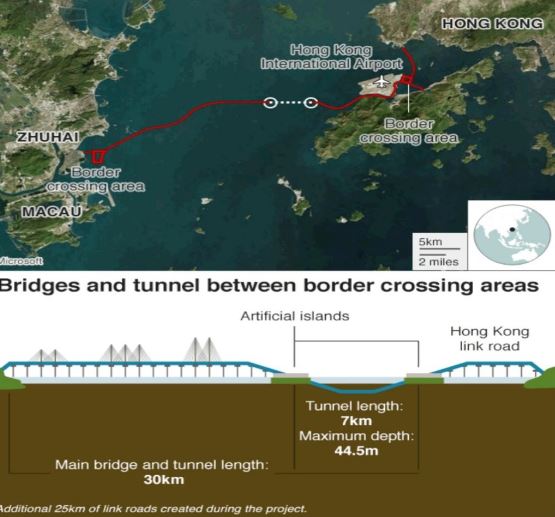 Critics have dubbed it “the big white elephant” that guarantees no economic returns. Other say it’s just to insure Hong Kong is physically connected to the mainland.