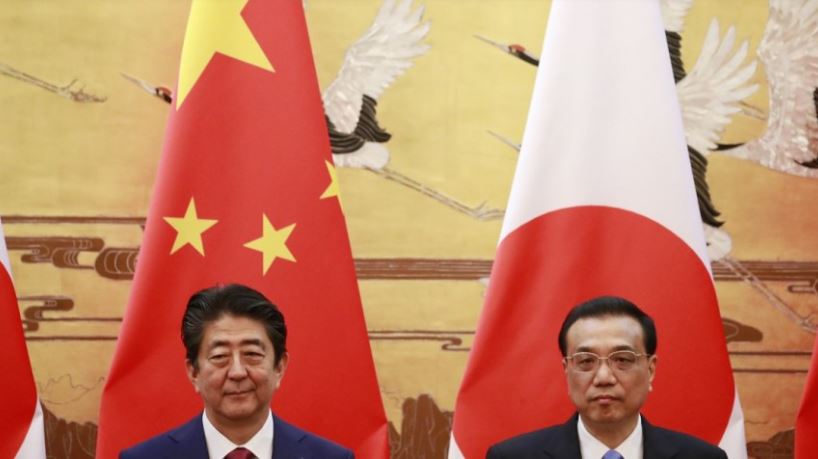 China and Japan have signed a currency swap deal worth 200 billion yuan (US$29 billion) – after five years without one – in a move that underlines their willingness to forge a closer financial relationship at a time when uncertainties in global markets are on the rise.

The deal was signed on Friday during Japanese Prime Minister Shinzo Abe’s visit to Beijing, underscoring the political significance of the world’s second and third largest economies joining hands while the trade war between China and the US rages on, analysts said.

Under the currency agreement, the People’s Bank of China and the Bank of Japan will be able to exchange up to 3.4 trillion yen for 200 billion yuan and vice versa over the next three years – a design that will help to ensure financial stability and facilitate financial ties, according to a statement from China’s central bank.

While the real value of the currency swap deal is limited – 200 billion yuan is a tiny amount for both China and Japan – it signals an improved relationship between the two countries.

Shen Jianguang, chief economist of JD Finance, said the scheme also injected some confidence in the Chinese market among Japanese companies at a time when the escalating US-China trade war was hurting business sentiment.

Shen, who was previously chief economist for Japanese investment banking company Mizuho Securities Asia, said the deal also provided a much-needed boost to Beijing’s plan to increase the yuan’s international clout and paved the way for Japan to treat the yuan as one of its reserve currencies.

Separately, the Bank of China’s Tokyo branch was named by the central bank as the clearing house for yuan transactions in Japan, a move that could boost use of the currency there.

China and Japan previously agreed a currency swap deal in 2002 after the Asian financial crisis, when countries in the region were seeking stability mechanisms.

At the time the deal raised hopes that Asia’s two biggest economies could deepen their financial cooperation and work together to enhance regional financial stability. It was renewed in 2007, with a credit line of just US$3 billion.

By 2013, however, when the bilateral currency deal between China and Japan was up for renewal again, relations between the two Asian giants had soured over the sovereignty of disputed islands the East China Sea.

China has so far signed similar deals with more than 30 monetary authorities, for a combined line of credit of more than 3 trillion yuan. They include Hong Kong, South Korea, the European Central Bank, UK and Switzerland as well as Mongolia, Argentina, Russia and Egypt.

Chen Yulu, a deputy governor of the central bank, told a forum in Beijing on Friday that China had signed currency swap deals with many Asian countries after the global financial crisis because “demand for the yuan has grown strongly” since then.

Meanwhile, as Beijing is treating bilateral currency swap deals as a way to promote use of the yuan beyond its borders, the internationalization process for the currency has been losing momentum due to depreciation pressures and Beijing’s strict capital account controls.

who is Amazon.com today. To read more click prossit.com