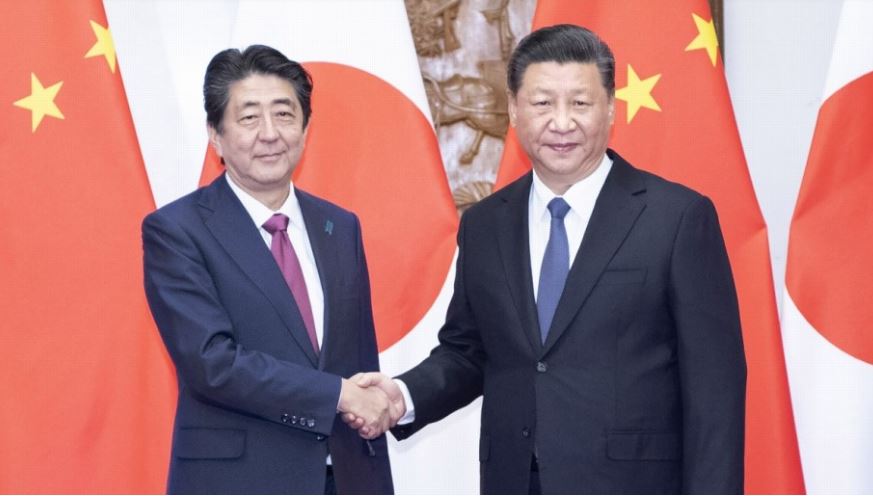 Relations between China and Japan have overcome “obstacles” and are moving “from competition to cooperation”, the nations’ leaders said on Friday as they signed new deals to prevent military clashes at sea and boost financial and economic collaboration.

“Our relationship has encountered a lot of obstacles,” Xi said at the start of their talks. “It was not a smooth ride. But with our joint effort, the relationship has become more normalized. A healthy relationship between China and Japan serves the basic interests of both countries”.

Abe, who is the first Japanese prime minster to visit China for seven years, told Xi that he hoped his trip would elevate the China-Japan relationship from competition to cooperation.

“China and Japan are neighbors and partners, and we will not be a threat to each other,” he said.

Even though Abe spent just three days in China, observers said the trip was an important step in the two countries’ rapprochement, and was partly triggered by the uncertainty that has grown up around the United States’ policies in Asia since Donald Trump took over as US president.

The two Asian leaders displayed a united front on free trade as Xi called on Abe to join hands with China in upholding multilateral-ism and an open world economy.

“Under the new situation, China and Japan have become more reliant on each other. Globally, the two countries also share more diverse mutual interests and mutual concern,” Xi was quoted as saying by state-run CCTV, as he also called for more strategic communication between the two countries.

The meeting between Xi and Abe came after the Japanese leader met Chinese Premier Li Keqiang and attended a forum on infrastructure investment in third-party nations. Li and Abe also witnessed the signing of a series of business deals and agreements.

One of them was a revision to a currency swap deal that had been dropped in 2013 but which now seeks to boost economic cooperation and promote free trade, and provide better protection for intellectual property rights.

The sides also signed about 50 agreements on boosting cooperation in third-party countries, while companies agreed more than 500 business deals.

Li called for an early conclusion to an Asia-Pacific nations trade pact that includes 16 countries but not the US. He also welcomed Japan’s participation in China’s Belt and Road Initiative.

“We need to have constructive ways to eliminate any kind of friction or conflict between the two countries,” Li said.

The two sides also agreed to open a hotline “as soon as possible” to prevent accidental clashes at sea and in the air – a move seen as containing tensions over the East China Sea where they have competing claims.

As a symbol of friendship, they also agreed to move forward on talks about China loaning another giant panda to a Japanese zoo, a Japanese government official said.

Relations between China and Japan slumped in 2012 when Tokyo launched a campaign to nationalise the disputed Diaoyu, or Senkaku, Islands in the East China Sea.

The move triggered anti-Japan demonstrations across China, and things worsened after Abe – who was subsequently described as an “unwelcome person” – visited the controversial Yasukuni Shrine in Tokyo, which commemorates Japan’s 2.5 million war dead.

Both nations responded by increasing their military deployment in the disputed waters. In June 2016, four fighter jets – two Japanese and two Chinese – almost collided in mid-air over the East China Sea, with both sides blaming the other for provoking the incident.

But growing uncertainty in the two countries’ respective ties with the US have pushed the traditional rivals closer. Japan is increasingly worried about America’s declining presence in the region, while China is looking to Japan to ease the impact of its trade war with the US.

However, Abe and Li were at odds over several matters such as economic practices and human rights, such as the detention of Uygurs in Xinjiang.

According to the Japanese government official, Abe told Li that, “the international community including Japan has been paying close attention to the human rights situation in China”.

Xi also called for Japan to “keep its promise” and to act according to the four documents signed by the two countries over 40 years ago when they established formal ties.

“We should constructively resolve our conflicts to maintain the political foundation for healthy China-Japan relations,” he said.

Diplomatic observers said the spat between China and the US provided an excuse for Beijing to get closer to Tokyo, but said that tensions between the two could still erupt.

“The timing is very important,” said Yasuhiro Matsuda, a professor at the University of Tokyo’s Institute for Advanced Studies on Asia.

“Although Prime Minister Abe was disliked by many Chinese people, he has effectively sent friendly messages to China in recent years, and successfully waited for the best timing.”