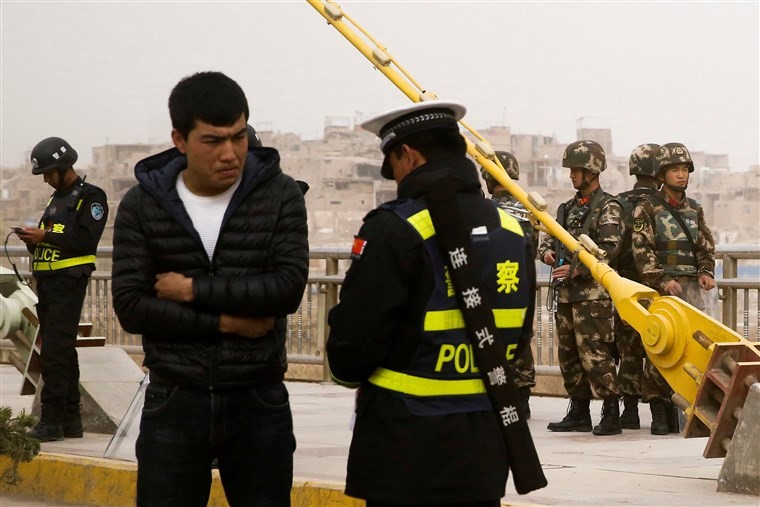 BEIJING — In China’s western Xinjiang region, populated by mostly Turkic-speaking Muslims, up to one in 12 Muslim residents languish in political re-education camps, according to the United Nations. Many have been confined for seemingly inoffensive activities, including:
Abstaining from alcohol and cigarettes. Having too many children. Owning a tent or a compass. Refusing to let officials take a retinal scan or a DNA sample. Giving a deceased relative a traditional Muslim burial instead of cremation. Traveling abroad, or just having spoken with someone who has.
“Straight out of George Orwell” is how outgoing U.N. Ambassador Nikki Haley described the persecution of ethnic minorities in Xinjiang by a government dominated by the ethnic Chinese, or Han, majority.
Social control is aided by facial-recognition software. Local ethnic Uighur Muslims making the traditional Hajj pilgrimage to Mecca, Saudi Arabia, must wear government-issued electronic monitoring devices.
Yet much of the coercion remains face-to-face, relying on “an erosion of social trust,” according to James Leibold, an expert on China’s policies on minorities at La Trobe University in Australia. “Husbands don’t trust wives, Han Chinese don’t trust Uighurs, brothers don’t trust sisters.
“Is Orwell the best metaphor?” Leibold asked. “Maybe Franz Kafka’s ‘The Trial’ is a better one, where someone is detained but he doesn’t know why, or what might happen to him.”
NEW APPROACH
For decades, Western criticism of Beijing’s oppressiverule in Xinjiang met with stony silence or denials.
Recently, that changed. On Oct. 16,the governor ofXinjiang, Shohrat Zakir, delivered the most detailed justification to date for the re-education camps, describing inmates as “students” in Xinjiang’s “vocational education and training program.”
According to Zakir, camp inmates live in air-conditioned dorms under “humane” conditions. They watch movies. They acquire job skills to become tailors, e-commerce traders and hairdressers.
Zakir’s statement, reported at length by China’s state-run Xinhua News Agency, reflected a new approach by Beijing: an all-out propaganda campaign to legitimize its practices in the region.
Up to 1 million ethnic Uighurs and other Turkic-speaking Muslims are held in Xinjiang’s camps, according to a U.N. report released in August. Until recently, however, Chinese authorities rarely acknowledged that the extra-judicial facilities even existed.
Officials have long ruled this Central Asian outpost with a heavy hand, viewing it as an incubator for terrorism and separatism, “but originally [they] tried to do it by stealth,” Leibold said.