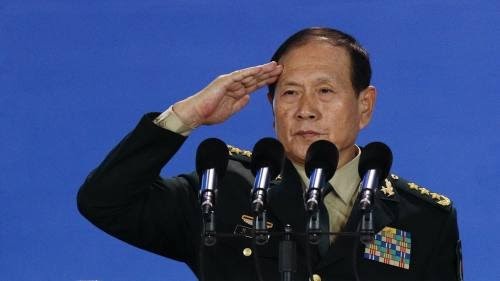 When General Wei Fenghe, China’s defence minister, took to the stage at the Xiangshan security forum organised by the People’s Liberation Army in Beijing last week, he assured delegations from 64 countries that China’s military “has always been a staunch defender of world peace”.

Yet in the same breath he issued a sharp warning: “Taiwan is China’s core interest,” Gen Wei said. “On these issues, it’s extremely dangerous to challenge China’s bottom line repeatedly. If anyone tries to separate Taiwan from China, China’s military will take action at all costs.”

Although Taiwan — claimed by Beijing but clinging to its independence with the help of a US commitment to aid its defence — has been a sore point between China and the US for decades, Gen Wei’s threatening tone reflected a new level of tension in military relations between the two countries.

The past few months have seen a partial breakdown in the routines of engagement between the armed forces of the US, the global power dominant in Asia-Pacific for the past half-century, and China, the region’s aspiring new hegemon, that the two sides had worked out meticulously over the preceding decade.

In May, the US withdrew an invitation to the Chinese military to take part in Rimpac, the world’s largest naval exercise held in the Pacific every two years, over Beijing’s moves to militarise reefs and shoals in the disputed South China Sea. 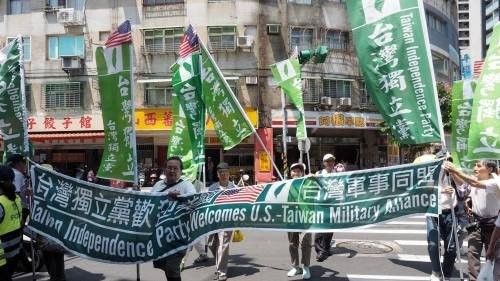 No to Beijing: members of the Taiwan Independence party hold banners as they march to the new American Institute in Taiwan (AIT), the de facto US embassy, in Taipei

Next, it emerged that annual security talks headed by Jim Mattis, US secretary of defence, were off. And then, a US Navy ship narrowly avoided a collision with a Chinese destroyer off a reef in the South China Sea claimed by Beijing.

The series of confrontations are part of a new and more fractious military relationship in which Beijing and Washington no longer conceal that they are rivals.

“In the past, China’s identity in the US strategy was as a problematic partner. Now it is a major competitor,” Jin Canrong, an international relations expert who frequently advises Chinese policymakers, said at the Xiangshan Forum. “The US cannot accept China’s rise and so this year we have a lot of foreign relations conflicts and a trade war. This is the reality we must live with.”

The US sees it in much the same way. The Trump administration has put countering the military rise of China at the forefront of its national security strategy and its national defence strategy.

Pentagon officials see China as the country to beat, and worry that China’s increased military spending, growing global footprint and extensive technological research will close the gap that has ensured America’s global military dominance, raising the prospect of a flare-up based on miscalculation or deliberate provocation.

During the second term of US president Barack Obama, the Pentagon had said its contacts with China were focused on co-operation, but in this year’s annual report to Congress on the Chinese military the US defence department said the bilateral military-to-military relationship was “focused on risk reduction”.

Trump administration officials say Mr Obama was too soft on China, did too little to stop Beijing’s military build-up of the string of disputed artificial islands of the South China Sea, and was naive to believe President Xi Jinping’s promise to Mr Obama at the White House in 2015 that “China does not intend to pursue militarisation”.

This year, the US said China had moved weapons including bombers and other military infrastructure on to the islands, despite an international ruling that China has no claim to them. In June, Mr Mattis accused China of “intimidation and coercion”.

On the US side, many policymakers think it is impossible to avoid competition between a status quo power and its rising challenger.

“The Chinese position is: given its new-found power, other countries in the region need to accommodate Chinese preferences,” said Oriana Skylar Mastro, a professor at Georgetown University and fellow at the American Enterprise Institute. “If you accommodate what China wants, there will be continued regional peace.

The most vexing problem for Washington is how to counter Beijing’s new assertiveness.

One of the measures of choice has been the so-called Freedom of Navigation Operations, manoeuvres in which US warships sail in waters off rocks or reefs in the South China Sea to demonstrate that it neither recognises Beijing’s claims to them nor the restrictions China wants to place on other nations’ movements there.

But critics say these moves have little impact other than risking incidents such as the one last month.

The Trump administration wants to find an approach that beats China at its own game — which seems to be to assert its power without triggering an actual conflict — by piling on increasingly public pressure on Beijing while avoiding incidents around Taiwan or in the South China Sea that could prompt more significant military intervention.

China, meanwhile, is downplaying its de facto colonisation of the South China Sea and emphasising other Asian security issues seen as important to Chinese leaders.

“Seriously talking about the risk of a war in the South China Sea is nonsense, we will not allow that to happen. But there is Taiwan, there is North Korea, there are other issues,” said Major General Yao Yunzhu, director emeritus of the Centre on China-America Defence Relations at the Academy of Military Science in Beijing.

A potential Trump impeachment is a ‘huge risk’ for 2019, expert says. To read more click cachettrading.com