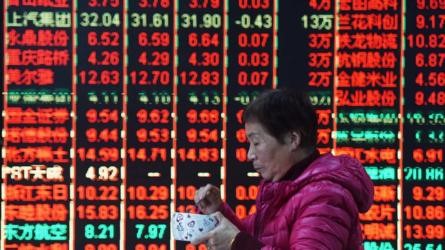 Stock markets in China gained on Friday after US President Donald Trump said trade talks with Beijing were “moving along nicely”.

The moves also follow media reports that pointed to progress on the US-China trade dispute.

It comes ahead of a key meeting between Mr Trump and China’s President Xi Jinping at the G20 summit this month.

The event will be closely watched for any progress in the resolution of the bitter trade dispute between the world’s two largest economies.

On Thursday, comments made by Mr Trump appeared to be an attempt to ease tensions.

“Just had a long and very good conversation with President Xi Jinping of China. We talked about many subjects, with a heavy emphasis on Trade,” the US president tweeted.

Mr Xi said he was “very happy” to talk to Mr Trump again and that he puts “great importance [on] good relations with the president”, according to Chinese state media.

The two countries have been locked in an escalating trade battle, with each side imposing tariffs on billions of dollars worth of imports from each side.

Washington introduced the duties in response to what it says are long-running, unfair trading practices by China, and Beijing has retaliated in kind.

But other signs of trade progress surfaced Friday.

A Bloomberg report said the US president had asked officials to begin drafting a potential trade agreement with China, citing unnamed sources.

Separately, the South China Morning Post – also citing unnamed sources – reported that Mr Trump had offered to host a dinner for the Chinese president after the G20 summit.