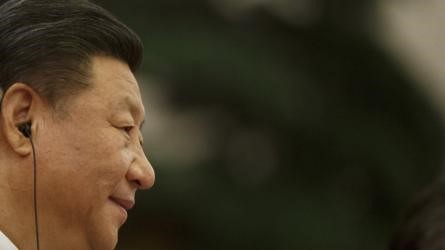 China has promised to further cut import tariffs and open its economy as it tries to address criticisms that its trade practices are “unfair”.

In a speech at a Shanghai trade expo, President Xi Jinping also made a robust defence of the global free trade system which he said was “under attack”.

The comments are being seen as a reference to the US, with which China is fighting a bitter trade war.

The US and China have hit each other with huge import tariffs this year.

Neither are showing any sign of backing down, and the US has threatened to escalate it further still

Speaking at the opening of the expo, “in a world of deepening economic globalisation, practices of the law of the jungle and winner takes all only represent a dead end”.

“An inclusive growth for all is surely the right way forward.”

Analysis: ‘China not caving in’

The Shanghai International Import Expo is China’s big attempt to show the world – and especially the US – that its economy is opening up more. The week-long event aims to give a multi-billion dollar boost to imports. Thousands of foreign firms are here.

In his opening speech, Mr Xi pledged lower import tariffs and moves to make it easier for foreign firms to access the economy. But as is often the case it lacked specific timings.

He also didn’t address the core US complaints about Chinese trade, including the alleged theft of intellectual property from US firms and the special terms China gives to its state run companies.

There was definitely no sign that China is about to cave in the escalating trade war. Mr Xi said the Chinese economy was “a sea”. Storms can overturn a pond, he said, but never a sea.

The US has imposed taxes on about half of Chinese imports into the US so far this year – making it more expensive for American consumers to buy them – and has threatened to target all imports.

The White House says the tariffs are a response to China’s “unfair” trade policies, which Mr Trump blames for helping to create a huge trade deficit, and its alleged intellectual property theft.

It also wants China to give American companies better access to its markets.

He did not make clear which countries’ imports would benefit from the lower tariffs, and whether the US was on this list.

China would also “continue to broaden market access”, Mr Xi said, adding that openness had become a “trademark of China”.

“China’s door will never be closed, it will only open still wider.”

Mr Xi also said China would speed up negotiations on both a China-EU investment agreement and a regional China-Japan-South Korea free trade deal.

Among the high-level delegates at the expo is UK Trade Secretary Liam Fox. The UK is courting various Asian countries for trade deals as it prepares to leave the EU next year.