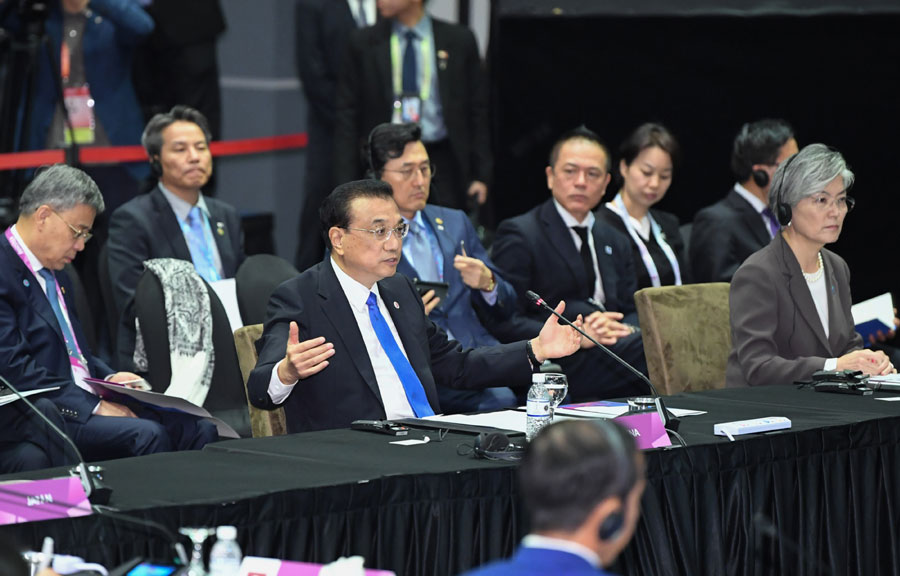 Free trade should be promoted for a stable, law-based environment, he says

Premier Li Keqiang called for increased East Asia regional integration on Thursday and for building up the East Asian Economic Community, while accelerating negotiations on the Regional Comprehensive Economic Partnership and the China-Japan-Republic of Korea free trade zone.

He made the statement at the 21st ASEAN-China, Japan and Republic of Korea (10+3) leaders’ meeting in Singapore, along with Japanese Prime Minister Shinzo Abe, ROK President Moon Jae-in and leaders of the 10 ASEAN members.

The RCEP negotiations will be moved forward in the last stage and the China-Japan-ROK free trade zone is being discussed constructively, he said. The two free trade mechanisms should be pushed forward in a balanced way to defend the rules-based multilateral trading system and provide a stable, free and lawbased environment, Li said.

The premier called for enhanced financial security by supporting the ASEAN+3 Macroeconomic Research Office to improve its economic monitoring and strengthen the prevention and relief system for regional financial risks.

Inclusive growth was also stressed. Li said the 13 countries are at different stages of development and should adhere to inclusive and broadly beneficial paths. Cooperation in third-party markets should be promoted, with China, Japan and ROK working with ASEAN members, he said.

China proposed a forum next year for young scientists from the 13 countries, and all countries are welcome to join the service league for small and medium-sized enterprises that was founded in China in August.

Li said that China is willing to work with other countries in promoting the establishment of the East Asia Economic Community for a better regional future.

The 13 countries officially started the leaders’ meeting series in 1997 when the Asian financial crisis broke out. They have organized 67 dialogues and cooperation mechanisms, including 15 ministerial-level meetings covering areas such as crime, agriculture, healthcare, culture, education, tourism and environmental protection.

Over the past two decades, regional trade has surged and the region has become one of most prosperous in the world. Leaders at the meeting agreed to conclude negotiations on the RCEP as soon as possible and increase the use of their own currencies, according to a news release.

The leaders also agreed to expand the cooperation model of China-Japan-ROK with a fourth country, and strengthen collaboration for smart cities, e-commerce, the financial sector, agriculture, poverty relief, environmental protection, education and other fields.

These countries will also stand together against challenges and will protect multilateralism and the rules-based free trade.