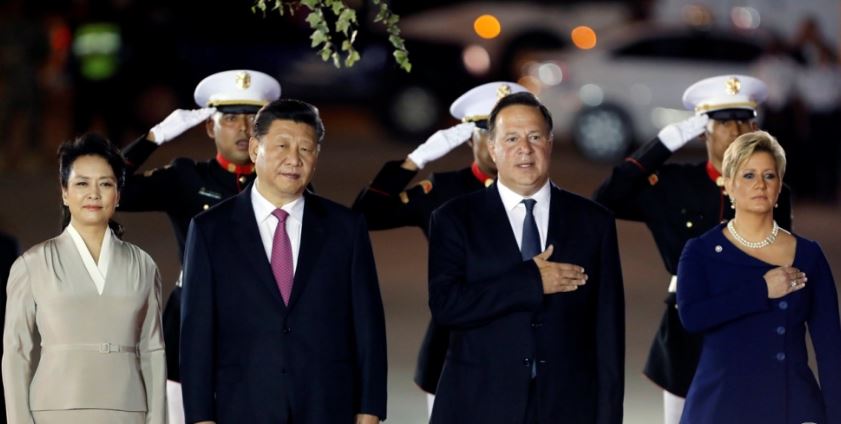 Chinese President Xi Jinping has landed in Panama for the first state visit by a Chinese leader to the small Central American nation, made possible when Panama switched its diplomatic ties from Taipei to Beijing last year.

According to China’s state broadcaster CCTV, Xi said Sino-Panama relations had made strong progress since the official establishment of diplomatic ties, with cooperation yielding successful results in various fields.

In an article written for local newspaper La Estrella de Panama, Xi said he had “high expectations” for the visit.

The warm ties follow Panama’s diplomatic break with Taipei in June last year. Since then, two more Central American countries – Dominican Republic and El Salvador – have this year also made the diplomatic shift.

The new friendships are a result of efforts to lure countries with formal relations with Taiwan – a self-ruled island which China claims as its own – to switch their allegiance to Beijing.

For the US, it is also an alarming sign of Beijing’s growing ties with Latin American countries and increasing influence in Central America, which Washington sees as its backyard.

China has been wooing the region with energy and infrastructure deals at the same time US President Donald Trump has pulled his country out of a Trans-Pacific trade pact involving countries such as Chile, Mexico and Peru, and taken a stricter stance on deporting illegal migrants from the region.

In October, US Secretary of State Mike Pompeo warned Latin American countries to keep their “eyes wide open” when it came to Chinese investment, amid a growing battle for influence in the region.

Since diplomatic ties were established in June last year, Panama has already guaranteed 28 diplomatic and investment agreements with China – including a US$500 million renminbi-denominated “Panda” bond expected before the end of the year, contracts for a port, convention centre and a new bridge over the Panama Canal.

Direct flights have also been launched between the two countries and a free-trade agreement has been under negotiation since July this year.

While China is Panama’s third largest export destination, Panama is only China’s eighth largest trading partner in the whole of Latin America, according to the Chinese ministry of commerce.

However, Chinese state media has lavished praise on Panama as the first Latin American country to partner with China on the “Belt and Road Initiative”, Beijing’strillion-dollar infrastructure project to bring investment in roads, railways and ports to countries around the world.

Beijing is also the second largest customer, after the US, of the key Panama Canal, with six per cent of the world’s trade passing through every year between Central and South America and the Pacific and Atlantic oceans.

Panama is Xi’s third stop in a series of state visits after Spain and Argentina, where he struck a 90-day truce on the trade war with Trump on the sidelines of the G20.

In Xi’s meetings with Argentina President Mauricio Macri after the G20, more than 30 agriculture and investment deals were signed, as well as an $US8 billion extension to last year’s currency swap deal, bringing the total swap amount to US$18.7 billion.

Xi will visit Portugal on Tuesday on the last stop of his tour.