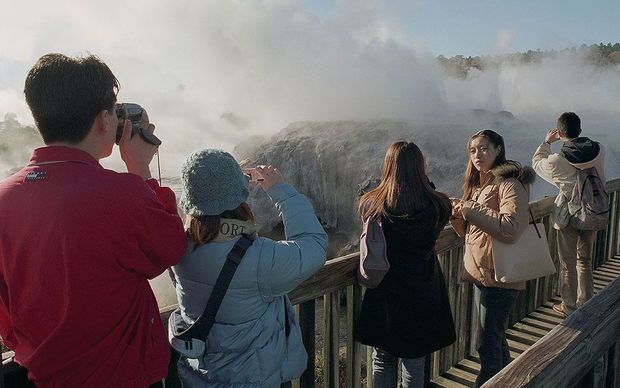 The post-80s generation of Chinese, brought up in one child families under former Chinese leader Deng Xiao Ping’s open door policy, are driving the flow, according to Cheng Mingming, Lecturer in Tourism at the University of Otago. Lecturer in Tourism at the University of Otago, Dr Cheng Mingming Photo: RNZ/Sally Round

These well-educated, well-off urbanites are China’s first generation to be able to travel freely and they behave quite differently from the typical package tourist of the past, he says.

The millennials are keen to explore and find the next big backdrop for their selfies, according to Dr Cheng.

Prestige and the ability to “showcase their personality” were key to how and where they travelled, he said.

Dr Cheng was among speakers at a conference this week, China’s New Tourists: New Zealand and the Year of Chinese Tourism, organised by the New Zealand Contemporary China Research Centre.

A slowdown in China’s economy would equate to a downshift in the growth of Chinese outbound tourism but numbers heading abroad would still be high, according to Professor Song Haiyan, Professor of Tourism at the Hong Kong Polytechnic University.

“Last year the total of outbound tourists was 130 million and in the next five years will increase to 150 million (per year). According to our research the next phase will be mainly travelling to long-haul destinations – Europe, United States, New Zealand, Australia,” he said.

Seventy percent of independent outbound tourists were in the 25 to 34 age bracket and, on average, they head abroad about three times a year, according to Song Rui of the Chinese Academy of Social Sciences, a Chinese government think tank.

“For the young generation, they are enjoying their life by travelling. Travel is very important to their lives,” she said.

About 60 percent of these free independent tourists are single women, travelling in small groups, she said.

The Pacific islands are likely to benefit from the new wave as they’re relatively unknown and interesting for China’s millennials, according to Hong Kong Poytechnic’s Professor Song.

He warned growth in those markets was likely to be constrained, though, until air links improve. “Chinese, especially younger Chinese visitors, most of them are living in urban areas in China. They seldom see good weather, blue sky, few people on the road.

“I think these are the natural attractions for the new Chinese tourist.”

Pacific island destinations are appealing but don’t yet provide enough information in the format young Chinese travellers like, according to Cheng Mingming.

He said operators in the region needed to become “digital ready” for China’s time poor millennials who rely heavily on trip planning apps for researching, booking and paying for their trips.

Travel blogs and do-it-all platforms such as Wechat and Ctrip were major sources of information for young Chinese travellers whose smart phones were like extensions of their body, the experts said.

“If we have opinion leaders writing a lot of blogs about South Pacific islands it will become appealing because what they’re selling like adventure tourism activities, snorkelling, diving, can be really attractive,” Dr Cheng said.

“These activities make young Chinese feel they are special.”