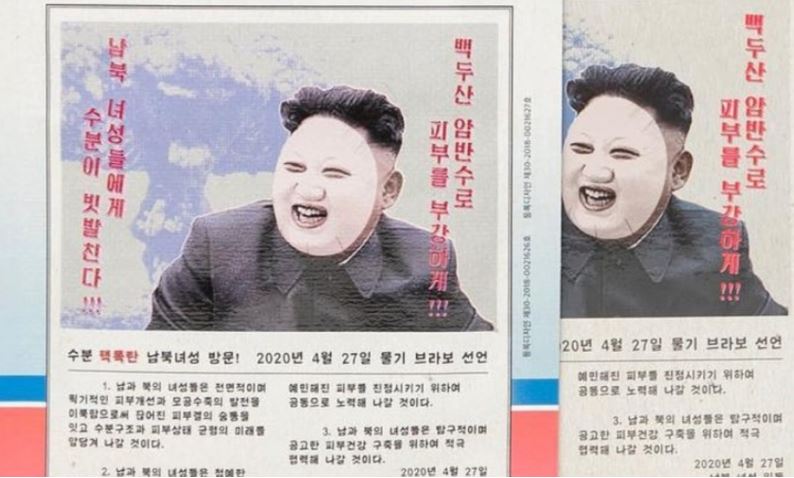 North Korean leader Kim Jong-un has been called the face of many things over the years: tyranny, despotism, dictatorship. But for some in the South, his image seems more beauty regime than evil regime.

Kim-themed moisturising face masks have been flying off the shelves in South Korea’s beauty-obsessed capital amid growing speculation the North Korean leader will visit Seoul this month.

The “Unification Moisture Nuclear Masks” feature an image of Kim on the packaging and are printed with propaganda-style slogans such as “All hail moisture for all women of the North and South!” and “Baekdu Mountain spring water makes skin strong!”

Manufactured by a South Korean skincare firm called 5149, the masks were launched in June, shortly after the Inter-Korean summits between Kim and his southern counterpart Moon Jae-in.

When will Kim Jong-un visit Seoul? If he knows, he’s not telling

“Personally, I don’t like merchandise promoting a certain political agenda, and luring consumers to buy it without a clue,” said Irene Kim, a South Korean skincare expert and co-founder of medical tourism company My Seoul Secret. She feared the masks could become propaganda for the North Korean regime, likening them to US President Donald Trump’s Make America Great Again products.

“A few years ago, North Korea was the largest threat to our country … Kim Jong-un was seen as a dictator and a tyrant who would stop at nothing to disrupt world peace, now he’s become the face of a popular face mask,” she said.

Speaking positively of the North Korean government remains illegal in the South under a 1948 law which prohibits “praising, inciting or propagating the activities of an anti-government organisation”.

But despite this – and the fact the two nations are technically still at war, having entered into a longstanding armistice since 1953 – Kim’s popularity has been on the increase since the summits with Moon in April and May.

South Koreans on Twitter called the North Korean leader “cute” and “funny” as he made “finger hearts” symbols while posing alongside Moon at Mount Baekdu in September. And in a poll published by the Korea Research Centre in May, 78 per cent of respondents said they trusted Kim.

And while the government has yet to crack down on such items – a telling sign of attitudes relaxing towards the North, not all consumers see the funny side.

“I think Koreans only view the surface of the issue without truly seeing the conditions of the lives of North Koreans,” said Justin Shin, a Seoul-based photographer who has worked with major skincare brands. “There can be a sudden populist sentiment among youngsters, but it doesn’t represent us all.”

Irene Kim added: “This would have been so unspeakable a few years ago, but now people are celebrating and even praising Kim. It’s funny how much has changed.”