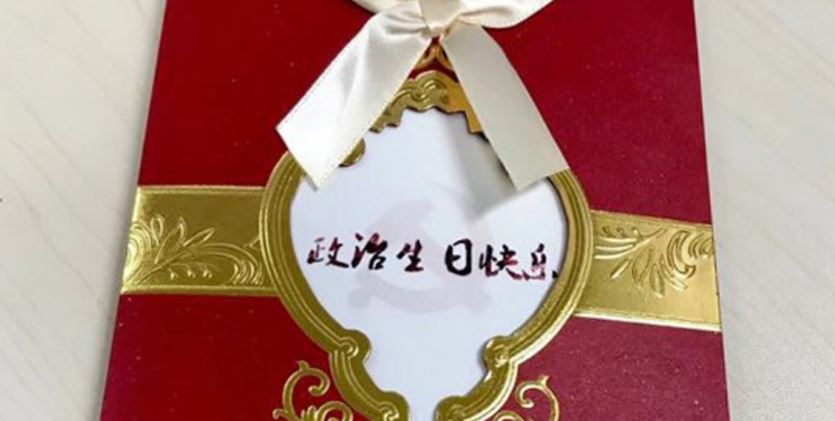 Happy birthday, comrade – why China’s Communist Party sends a card on the date you joined

Members of the Chinese Communist Party are receiving “Happy Birthday” cards from their party branch, not on their actual birthday but on each anniversary of them joining the party.

The practice has gained popularity in the past two years since Xi Jinping, the president and party chief, vowed to strengthen the party’s control over China.
One party member who worked for a state-run energy company told the South China Morning Post he was surprised to receive a “Happy Political Birthday” card from the party branch last week, congratulating him on the anniversary of him joining the party four years ago.
Unlike the lighthearted and warm messages in traditional birthday cards, the red political birthday card is stern. Its message quotes the slogan from last year’s 19th National Party Congress – “stay true to our founding mission, we can accomplish the mission” – and offers a reminder to the recipient not to forget why they joined the party.
Xi Jinping targets grass roots in push to extend Communist Party control
Such cards are also available in digital form. A search for “best wishes for political birthday” shows that many e-card providers, such as Maka, started to offer this service last year.
The paper cards and e-cards carry similar messages, asking party members to remember their responsibility and party discipline, to be mindful of their daily conduct and to follow the direction of the party’s Central Committee.

A head of a party branch at a state-owned enterprise focusing on motorway investment in China’s eastern Jiangxi province confirmed that sending a “Happy Political Birthday” card was becoming a new formality.
He said efforts had been made at his branch to add to the personal file of every member so that it could send cards to all members on their party-joining anniversary.
Why Chinese Communist Party’s largest elite body now has a lot of new members but not many young ones
Party members whose “birthdays” fall in the same month are being asked to retake their oaths together.
Last October, led by Xi, the party’s top leadership retook their oaths together. Since then, grass-roots party branches have followed their lead.
World’s third largest cryptocurrency exchange Huobi creates Communist Party committee
Xi outlined the party’s tightened grip at last year’s five-yearly national congress. “Government, the military, society and schools, north, south, east and west – the party leads them all,” the president said.
He seeks to reassert the party’s control over society, with requirements that all companies of a certain size – including foreign firms – establish their own party branches.
The party released regulations in November spelling out in detail how these branches should operate.