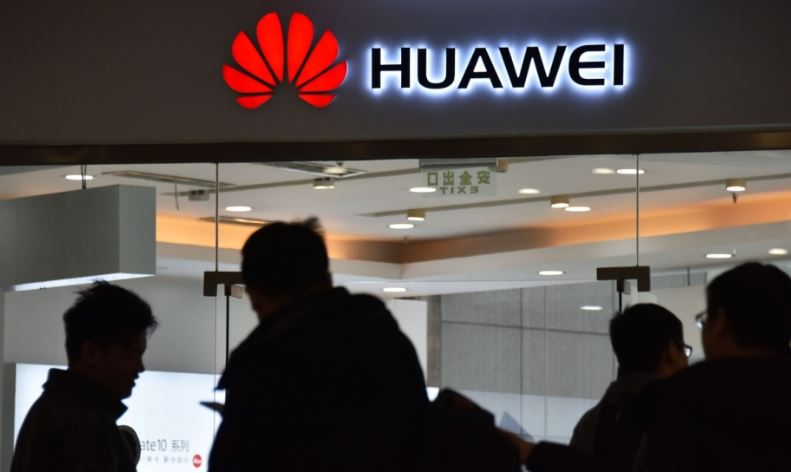 Huawei and Skycom, the firm accused of breaching US sanctions in Sabrina Meng Wanzhou case, shared web domain according to public records

Skycom Tech, the Hong Kong company at the centre of Huawei Technologies’ alleged violation of US sanctions on Iran, shared the same email domain as the Chinese telecoms equipment giant, public records show.

The digital link between the two firms could prove important in the case against Huawei’s chief financial officer, Sabrina Meng Wanzhou.

She is being held in Vancouver awaiting extradition to the US where prosecutors believe she deliberately misrepresented Skycom as a completely separate entity in an attempt to sidestep sanctions preventing Huawei doing business in Iran.

The case has rocked the already strained relations between China and the US.

Canadian prosecutors alleged in court filings that Huawei used Skycom to circumvent the US sanctions. They claim the latter was in fact “an unofficial subsidiary” of Huawei, even though Meng had denied to US bankers any direct connection between the two companies.

The domain registration records give the name Shen Fen as the contact person for Skycom. The telephone and facsimile numbers listed for the website are located in a Huawei building in Shenzhen, according to the phone number website 114Best.com. 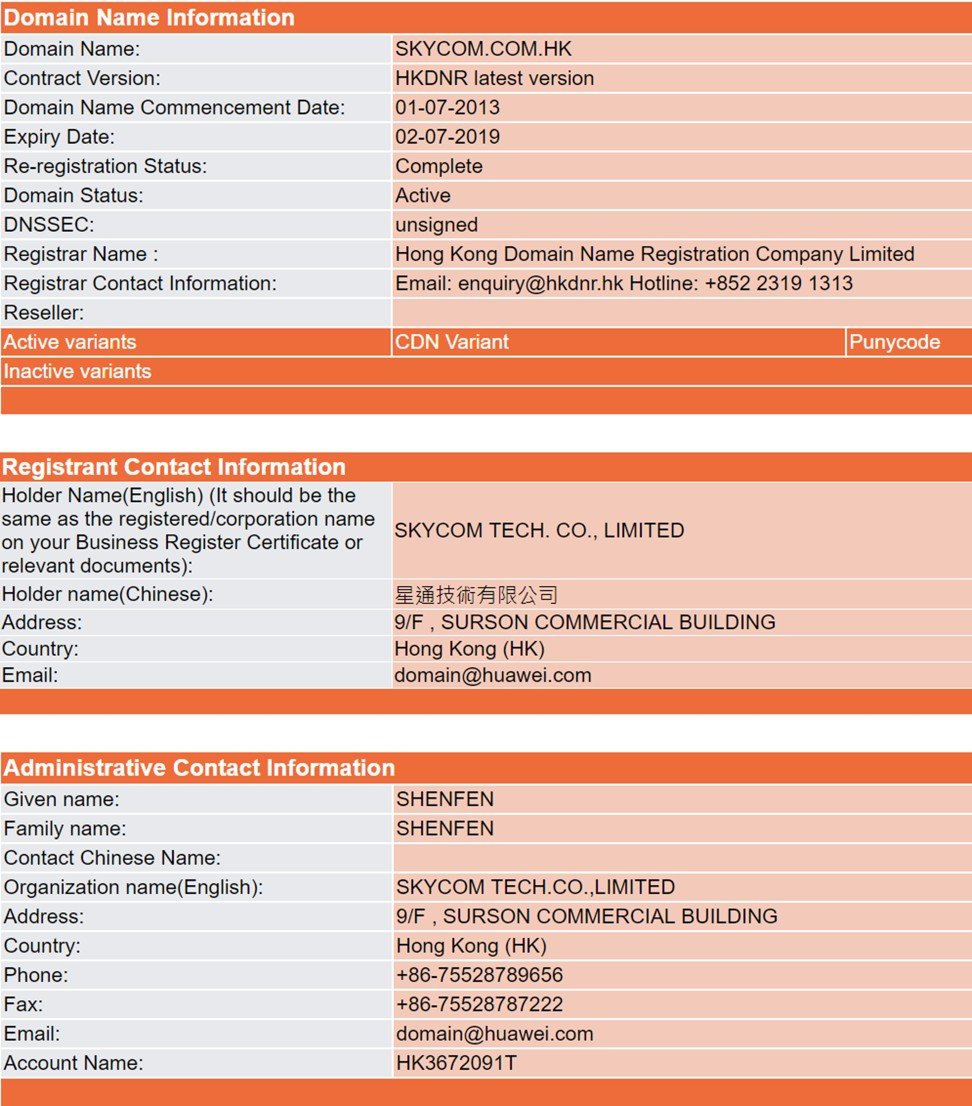 Ming Pao, a Chinese newspaper, reported on Monday that Shen was Huawei’s corporate lawyer, and indeed a court ruling from May shows a Huawei employee named Shen Fen represented the company in a trademark dispute case.

The employee worked in Huawei’s intellectual property department, according to Ming Pao, but the Post was unable to reach Shen by phone at the company’s head office in Shenzhen.

The fact that Skycom registered a Huawei domain six years after the two firms supposedly severed their links may add weight to the claims of US prosecutors that the latter used its “unofficial subsidiary” to carry out business in Iran.

Canada did not tell of Sabrina Meng’s arrest until asked, Beijing says

Several Huawei spokespeople were approached for comment but did not immediately respond.

Former employees of Skycom have stated that its employees had Huawei email addresses and badges, according to a Bloomberg report citing a Canadian court filing. 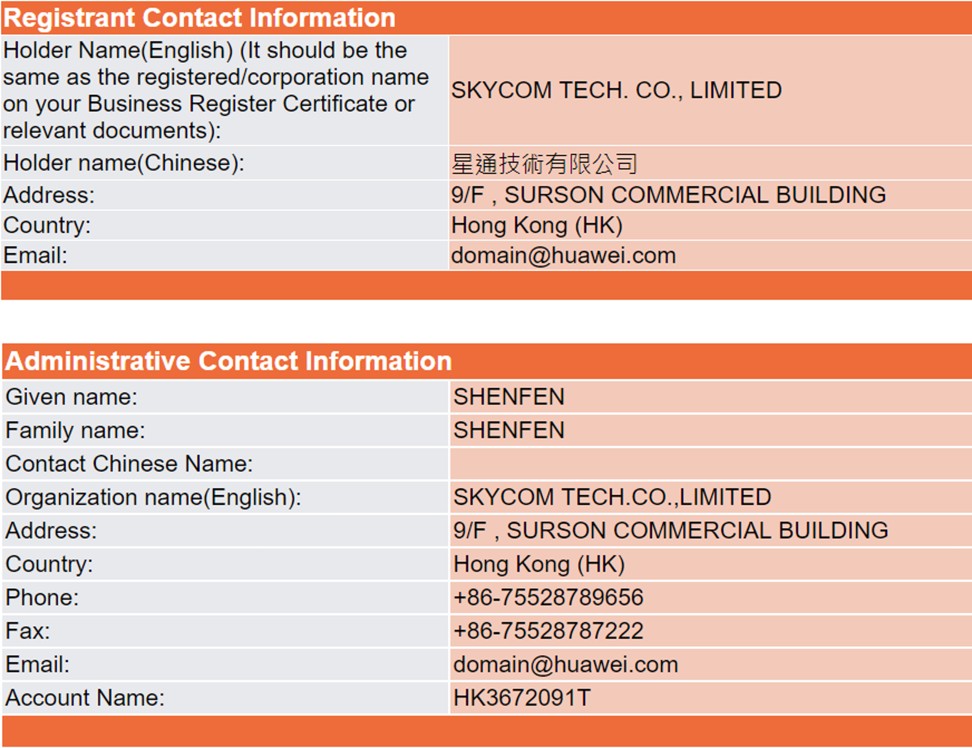 Huawei, the world’s largest maker of telecommunications equipment, stands accused of violating the US government’s sanctions against Iran, and Meng could face trial in the US for misleading financial institutions into breaching those sanctions.

Meng, who is also the daughter of Huawei founder Ren Zhengfei, was arrested in Vancouver while she was en route to Mexico from Hong Kong, at the request of the US Justice Department.

The case against Meng came at a high-stakes moment for the relationship between the world’s two largest economies, as they try to reach a resolution to their trade war.

Chinese President Xi Jinping and US President Donald Trump struck an agreement on a 90-day truce on December 1, almost nine months after the Trump administration made the first move to hit China with import tariffs on US$50 billion worth of its goods. 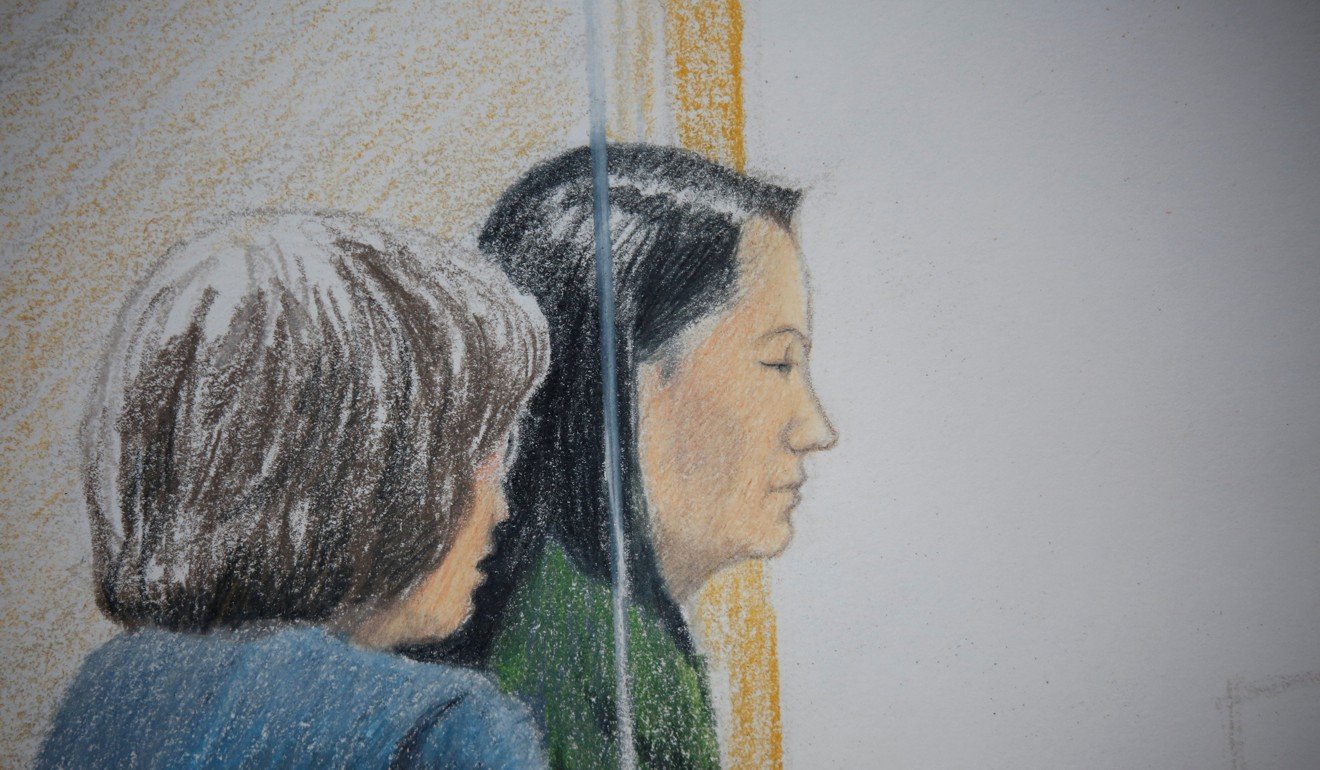 Technology is increasingly seen as the crux of the rivalry between the two nations, as China’s grand strategy to boost its hi-tech sectors, named “Made in China 2025”, has drawn the ire of the Trump administration.

Many are wondering if Huawei might suffer the same fate as ZTE, the Chinese telecommunications equipment company on which the US imposed a ban from April to July, a move which brought the firm to the brink of collapse. The ban prevented ZTE from buying parts and software from the US after it violated the country’s sanctions against North Korea and Iran.

Reuters first reported in 2013 that Huawei and Meng had close ties to Skycom which, according to Canadian prosecutors, tried to sell US equipment to Iran despite the sanctions.