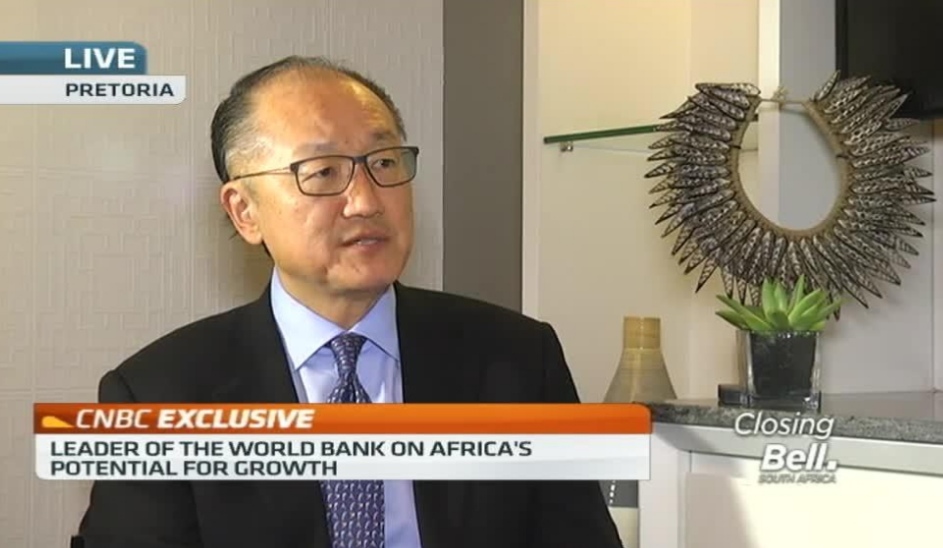 “They have to get their house in order, they have to manage their economies better” says Kim about how Africa countries can guard themselves against further economic damage.”

Update: World Bank Group President Jim Yong Kim whose term was due to end in 2022 announced on January 7, 2019 that he will step down from his position after more than six years at the helm.

Kim will join a firm that focuses on increasing infrastructure investments in developing countries and rejoin the board of Partners In Health (PIH), an organization he co-founded more than 30 years ago.

Kristalina Georgieva, World Bank CEO, will assume the role of interim President effective February 1. Below is an article written on his recent visit to Africa and the advice he offered the continent to grow its economies

PRETORIA., World Bank Group President Jim Yong Kim says the largest economies in Africa need to start growing higher than the birth rates, if development goals are to be achieved. He was speaking to CNBC Africa in an exclusive TV interview on the back of the launch of the Human Capital Project in South Africa, an initiative that seeks to accelerate more and better investments in people for greater equity and economic growth.

Kim believes that the G20 summit last week was as much of a success as one could hope for. But that the global economy still presents challenges that will impact growth going forward.

“We have decreased our growth estimates because of trade uncertainty and decreased investments,” says Kim about the World Bank’s GDP growth forecasts for 2019. It estimates that the global economy will grow by 3 percent next year and Sub-Saharan Africa by 3.5 percent.

Kim cautioned that the decrease in global investments would have an impact on developing countries and how they get access to funding.

The ongoing trade dispute between China and the United States has led to increased market volatility and emerging market currency fluctuations that have compromised potential investments. It is said that Africa in particular has become collateral damage in the fight between these two mammoth countries, but Kim believes that this is an avoidable outcome.

“They have to get their house in order, they have to manage their economies better” says Kim about how Africa countries can guard themselves against further economic damage.

In addition to better economic management, Kim believes that strong leadership is essential for African countries to thrive. He recognised Ethiopia and South Africa’s new leadership for what he describes as having “great visions for their countries”.

“Structural reforms need to be revised so people can invest in their own country,” Kim told CNBC Africa. There is as much as $6 trillion in negative interest rate bonds that he says could be accessed. This could attract foreign capital and reduce the reliance on government for infrastructure development.

The World Bank has said it will invest $200 billion over the next five years to combat climate change. Africa, which is still largely reliant on fossil fuels for energy and has a large infrastructure deficit, is an important market for projects that will address climate change, according to Kim. A significant amount of money will be set aside to assist various projects from agriculture, to health, to ensure they are climate smart and sustainable.