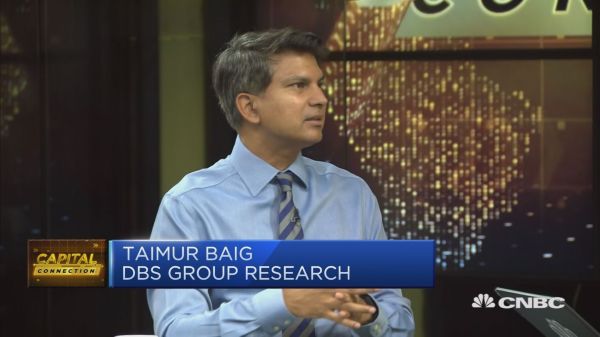 Recent signals about the world’s second-largest economy point to weaker growth, including tech giant Apple recently lowering revenue guidance for the first quarter as it blamed a variety of factors including Chinese demand. And, on Monday, Hong Kong-listed automaker Geely said it missed its sales target in 2018 and was forecasting flat sales in 2019.

“It’s intriguing that the domestic demand part is the weak part — the external demand is not that bad,” said Taimur Baig, chief economist at DBS Group Research.

Last year, China reported economic growth of 6.5 percent in the third quarter — marking its weakest pace since the global financial crisis. Still, the country’s official growth target for 2018 was around 6.5 percent.

While official data indicated China’s economy held up for much of last year, it now appears to be slowing as production metrics and export orders fall amid the country’s trade dispute with the U.S., its largest trading partner.

Beyond the tariffs battle, China’s economy has been facing its own domestic headwinds. Even before U.S. President Donald Trump kicked off the latest escalation in trade tensions, Beijing was already trying to manage a slowdown in its economy after decades of breakneck growth.

Despite negotiations between the two economic giants underway in Beijing, Baig said it was unlikely that the trade war would end in the next three to six months because the areas of disagreement extend far beyond imports and exports.

In fact, he said, “We will breathe a little sigh of relief if things don’t get worse.”

At the beginning of December, Trump and Chinese President Xi Jinping agreed to a 90-day ceasefire that delayed the planned U.S. increase of tariffs on $200 billion worth of Chinese goods that were initially due to take effect on Jan. 1, while the two sides tried to negotiate a deal.

A positive signal, according to Baig, would be an extension of the three-month truce into the summer, giving the global economy some respite for the first half of the year.

“But beyond that, let’s keep our expectations checked,” he said.