Latest News
Home News China’s economy is fine, Trump and Xi won’t fight a trade war and the Fed is a friend 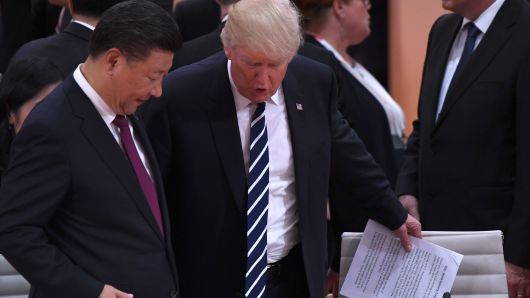 China’s economy is fine, Trump and Xi won’t fight a trade war and the Fed is a friend

That’s what I think of the three main issues worrying the financial markets.

Let’s begin with a test about the state of China’s economy.

Does China have an inflation problem? No, the reported headline price inflation in December was 1.9 percent. That’s what hits the Chinese real purchasing power and determines the scope of discretionary monetary policy. Again, that’s the headline rate because Beijing does not play around with an array of manipulative inflation “measures.” For last year as a whole, China’s inflation was 2.1 percent — a number that would even pass the price stability test from the Bundesbank’s stern taskmasters.

Is China having a problem of bad public finances? Perhaps a spot of a local difficulty, as the Brits would say, but nothing that China’s 46 percent gross savings rate can’t handle. Broadly defined public sector accounts are expected to show a budget deficit of about 3 percent of GDP for the last calendar year, and the gross public debt is currently estimated at 46.3 percent of GDP. The debt could be a significant underestimate, but only China knows the truth about that, partly as a result of its own methodology of defining and measuring national accounts.

Does China need to import foreign savings to finance its public debt and budget deficits? No, China is a net capital exporter to the tune of 1.2 percent of its GDP.

That is a result of a positive trade balance. This year, for example, net exports are expected to contribute half a percentage point to GDP growth.

What you see there is an economy that has plenty of active demand management instruments to prevent a major growth slowdown. Some of those are already at work to fine-tune structural adjustments and to move the changing composition of aggregate demand toward household consumption, business capital outlays and more selective infrastructure investments.

Aha, I hear you saying: You are glossing over the horror stories of a “heavily indebted economy,” the “disaster of shadow banking,” “bankrupt local governments,” etc.

Again, only the Chinese government knows the truth there. Beijing won’t tell, and I don’t want to operate with unofficial guesswork or pure inventions. But, whatever the truth, China is not Greece or Italy. The macro-equilibrium numbers show that Beijing has enough firepower to manage its internal debt.

Now, policy errors are always possible, but the probability of that happening is not very high in view of China’s stellar track record of economic management. That’s all Premier Li Keqiang is watching — under the Politburo’s menacing gaze.

Trump sounds like he might be joking that he got China over the barrel on trade because the Chinese economy is in bad shape. No, it is not. China’s policy-induced growth slowdown to the range of 6 percent and 6.5 percent is something Trump can only dream about— and fear — because a confident China is not a desperate trade negotiator.

The proof is that, for two years now, Trump got nowhere with China on trade. The Chinese trade surpluses with the U.S. have grown at a strong rate, and last year’s hit a record $323.32 billion, according to government data released on Monday. Meanwhile, Trump keeps firing off tweets about “big progress” on trade talks with China.

No progress at all, in fact, because Trump put trade negotiations on a wrong path. Instead of seeking to impress China’s Xi with missiles fired at Syria “in lieu of after-dinner entertainment” during the Florida summit in April 2017, Trump should have been a gracious host striking up a trade deal as a matter of great national priority.

But Trump did nothing and got nothing. Worse, Trump sidelined the whole trade negotiating process by hitting China’s systemic red lines to hear — again — last week that China will ignore such reform requests, but that it would be buying American farm products and open up, on its own terms, some segments of the economy to American trade and investments.

That’s what Trump could have got easily from Xi in Florida almost two years ago.

Trump now realizes that China won’t be intimidated, and that import tariffs and other impediments to trade are a blind alley he cannot afford in the run-up to his increasingly tenuous re-election bid.

So, cross the trade war with China out. China never wanted it, and Trump missed the opportunity to make a deal on Xi’s mantra: A “win-win cooperation.”

Sadly for the U.S., China won this round. And China’s trade surplus with the U.S. will continue to soar.

Trump will now be looking up to Xi for trade handouts, and if he wants anything to take home as an election prop from his next meeting with North Korean leader Kim Jong-un.

Fortunately, the Fed is an infinitely simpler story.

Having done with panache its ego trip last month (a 25 basis point rate hike), the Fed is now being reassured by quiescent inflation expectations and a flattening yield curve. Barring an unlikely inflation flare-up, or price tensions in energy markets, the Fed can leave the economy in an adjustment process under conditions of full employment and easy credit terms.

With $1.5 trillion of excess reserves in the interbank market, the Fed can comfortably proceed to gradually normalize its bloated $3.4 trillion balance sheet.

Wonderful, so what can go wrong for the world economy and financial markets?

Plenty, mainly as a fallout from some of the worst security tensions in the post-WWII period.

American forays into what China considers its territorial waters are sovereignty challenges Beijing is unlikely to tolerate. It’s a disaster waiting to happen. Xi is not bluffing with his military on a war footing. In spite of that, the Pentagon keeps going through encounters with Chinese naval assets and their air covers.

Such incendiary episodes are now routine between U.S. and Russian militaries in the Black Sea, the Baltics and the North Pacific.

At the moment, the chances of a nuclear Armageddon hinge on U.S., China and Russia military hotlines to prevent “accidents and miscalculations.”

Israel, backed up by the U.S., is striking Iran and Lebanon-based Hezbollah targets all over the Syrian theater. There is constant fighting in Ukraine, at the heart of Europe, with no peaceful end in sight. West Balkans are the time bomb left ticking after the violent breakup of Yugoslavia. Venezuela is in an uncontrollable political turmoil where China and Russia are staring at the U.S. The social unrest in France, and an increasing political instability in Germany, are putting an end to the project of the European economic and political union. That also looks like the end of the longest period of peace in west European history.

Here is what markets think of all that: The price of gold went up 9 percent since the middle of August 2018. Over the same period, the Dow is down about 6 percent, while the German DAX collapsed approximately 12 percent.