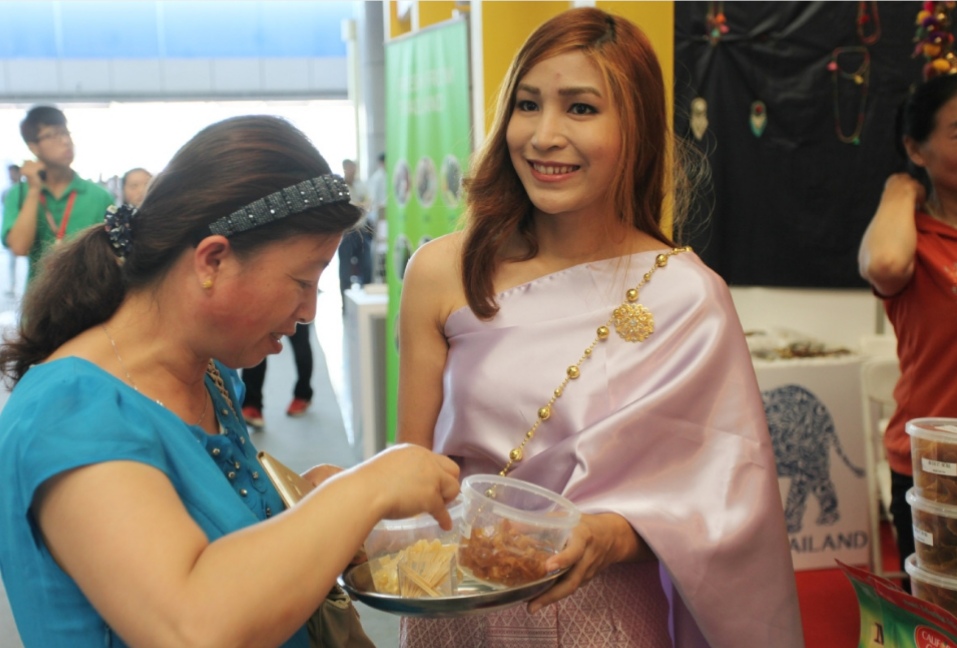 A visitor tastes Thailand fruit at a food expo in Xi’an, Shaanxi province

There weren’t many options for consumers in inland cities in the winter when buying fruit. However, besides common fruit like apples and oranges, more tropical fruit has hit China’s western regions since the fruit market has been opening wider to the world.

Chen Lipeng, 29, has worked for a fruit market in the city of Lanzhou, capital of Northwest China’s Gansu province, for several years. He said it was uncommon to see tropical fruit in the market, and if they did appear, they would be extremely expensive.

“But now, dragon fruit from Vietnam and Chilean cherries are very popular items in the winter,” Chen said.

An increasing number of imported fruit markets have emerged in the city of Lanzhou since last year. And Chen’s parent company is running more than 30 stores in Lanzhou.

In the supermarkets, shelves or booths for imported fruit have been placed in areas where they can easily grab customers’ attention.

“Customers have higher requirements for fruit variety and quality since living standards have improved and more people are pursuing a healthy diet,” said Hu Junyi, a marketing department manager of a Lanzhou-based fruit company.

“Upgrading of the consumption structure leads to the increase of imported fruit markets, as well as more reasonable prices and diversified options,” said Hu, who gave credit to the opening-up policy of the country.

Since the first port for imported fruit and frozen aquatic products in Gansu started operation last month, residents in the hinterland are expected to taste more diverse and fresher fruit and food from overseas markets.

In the city of Xi’an, capital of neighboring Shaanxi province, a local agricultural products trade center is full of hustle and bustle this winter. Trucks loading imported fruit from coastal cities of Guangzhou and Shanghai arrive here to unload their cargo every day.

“My company transports over 20 tons of imported cherries and avocados from several ports each day. We don’t care about the prices, but have strict requirements on the quality, as the rising middle-class families are willing to pay more for better quality products,” said Zheng Yanqing, general manager of a Shaanxi-based imported fruit company.

Starting in the import business in the 1980s, Zheng’s company began by shipping fruit by trains, and they could only transport dozens of boxes each time. In the 2000s, the company used chartered vehicles to transport fruit.

Zheng’s company has set up subsidiaries in northwestern inland cities, including Lanzhou, Yinchuan and Xining. The sales value in 2018 increased to 120 million yuan ($17.5 million).

“We’ve seen the soaring sales volume, value and the expanding market over the past years. Tailored products, brands and high quality are the concerns of customers, which also promote the development of the fruit industry. We have also seen more varieties of fruit from more countries around the world,” Zheng said.

Thai businessman Tanyong Kamun is a business partner of Zheng. He engaged in the fruit industry after learning of the huge market in China.

As of October 2018, China had allowed the import of 54 types of fruit from 42 countries.