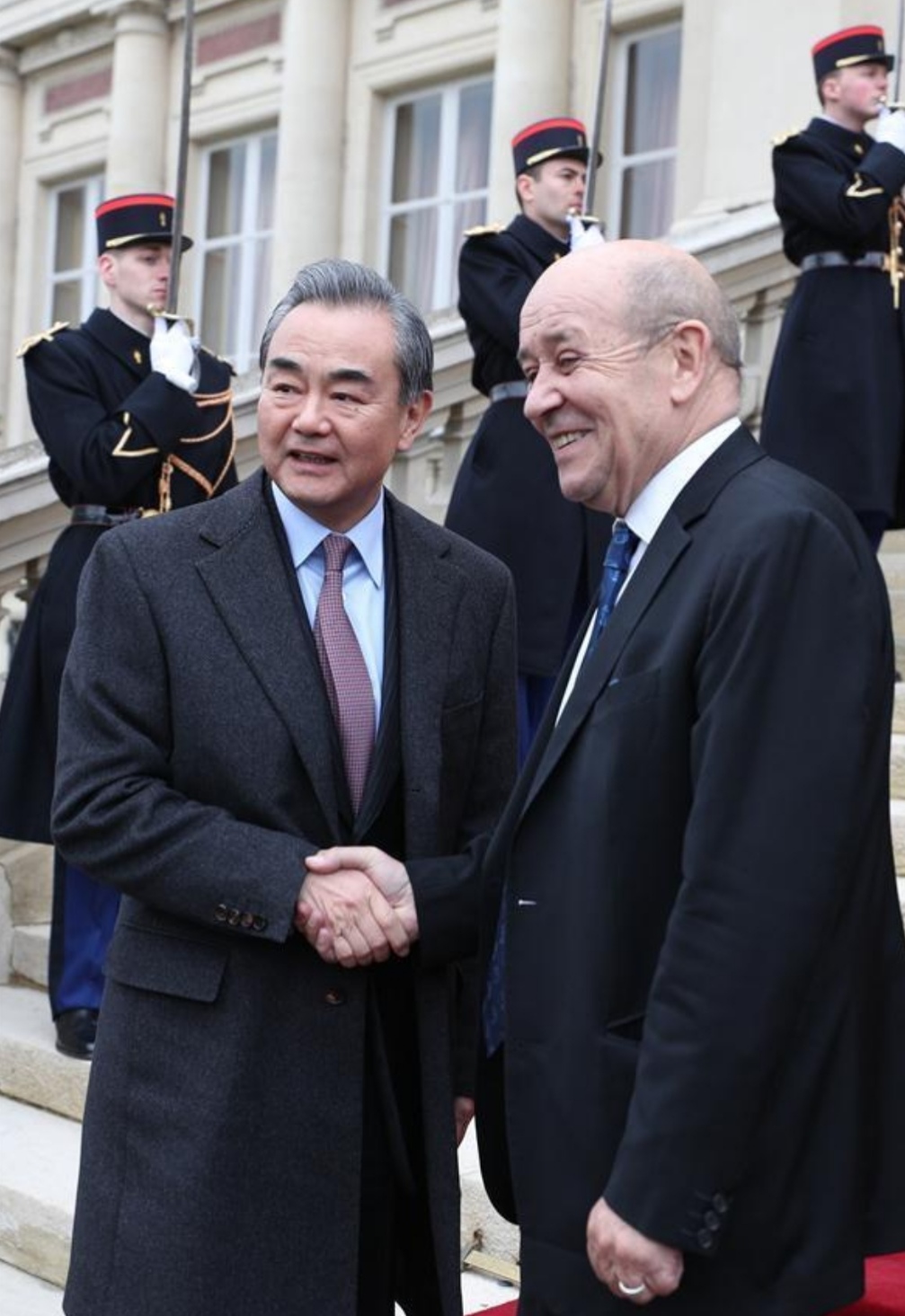 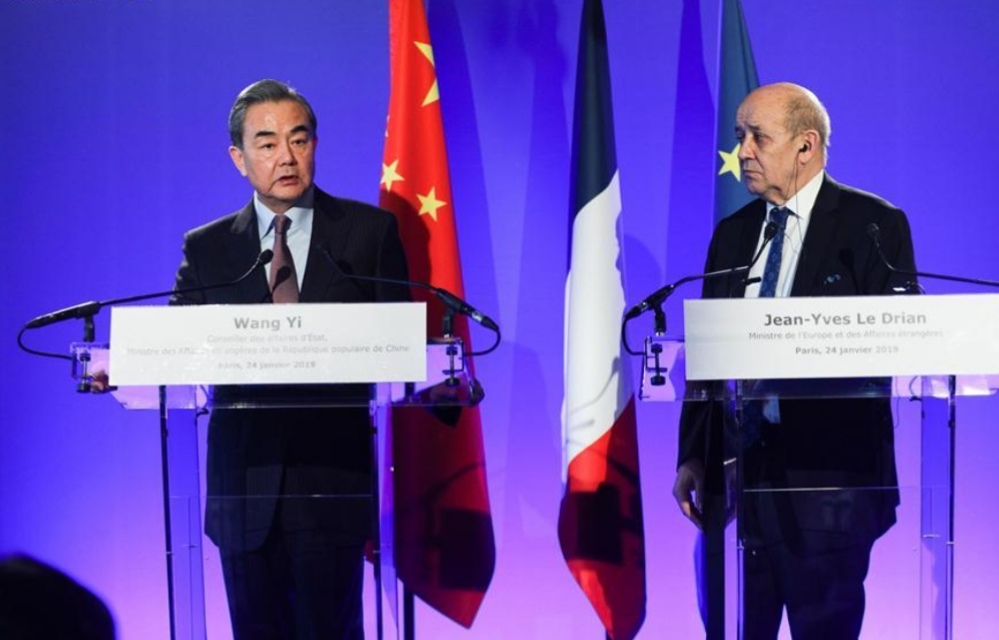 Chinese State Councilor and Foreign Minister Wang Yi (L) and French Foreign Minister Jean-Yves Le Drian inaugurate a commemoration for the 55th anniversary of the establishment of diplomatic relations between the two countries in Paris, France, Jan. 24, 2019. Wang Yi is in Paris for the 18th consultation of the coordinators for the China-France Strategic Dialogue.

Visiting Chinese State Councilor and Foreign Minister Wang Yi held talks here Thursday with his French counterpart Jean-Yves Le Drian on bilateral ties. Wang is in Paris for the 18th consultation of the coordinators for the China-France Strategic Dialogue.

Wang said that 55 years ago, France became the first Western country to establish formal diplomatic relations with China. China-France relations have always been at the forefront of Sino-EU and Sino-Western relations, he said.

Wang said that the existing international systems and rules are being challenged, and the existing consensus on multilateralism and trade liberalization is being impacted. China and France should further cooperate on the basis of fine traditions, he said.

Wang put forward a four-point proposal in this regard, asking the two sides to hold high the banner of multilateralism, open cooperation, dialogue among civilizations and a community of shared future for mankind.

He called for joint efforts to uphold the international system with the United Nations (UN) Charter as its core and the multilateral free trade regime based on rules.

Urging the two countries to work together to build an open world economy, Wang said China is committed to deepening reform and opening-up, which will bring more cooperation opportunities for countries including France. He also expressed the hope that France can provide an open, fair and transparent business environment for Chinese companies.

He stressed that the two sides should encourage different civilizations to respect, appreciate and complement each other, abandon all zero-sum games and egoism, and advocate a new type of international relations featuring mutual respect, fairness and justice, and win-win cooperation.

For his part, Le Drian extended his greetings to the Chinese people who are embracing the Chinese Lunar New Year, saying it is of great significance for China and France to jointly celebrate the 55th anniversary of the establishment of diplomatic ties.

For the past 55 years, the fruitful cooperation between the two countries has continuously promoted the development of bilateral relations and enhanced mutual trust, he said.

At a time when multilateralism is facing severe challenges, it is very important for France and China, as permanent members of the UN Security Council, to work together to uphold and strengthen the multilateral system, Le Drian said.

France is willing to work together with China to keep close high-level exchanges, deepen economic, trade and investment cooperation by promoting progress in projects in key areas, and strengthen personnel exchange by welcoming more Chinese students to study in France, Le Drian said. 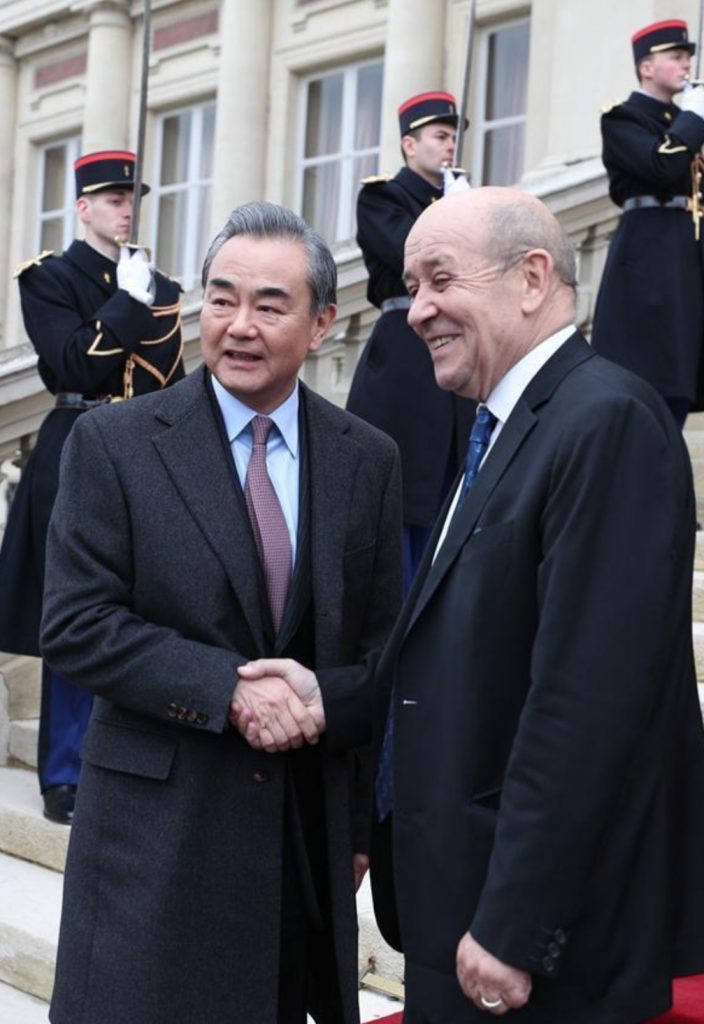 Chinese State Councilor and Foreign Minister Wang Yi (L, front), who is in Paris for the 18th consultation of the coordinators for the China-France Strategic Dialogue, meets with French Foreign Minister Jean-Yves Le Drian in Paris, France, Jan. 24, 2019