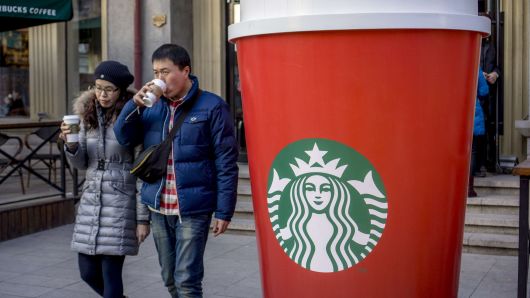 Starbucks CEO: ‘We are playing the long game in China’

Despite growing concern about the slowing growth of the Chinese economy, Starbucks is holding onto optimism about its second-largest market.

“We continue to play the long game in China,” CEO Kevin Johnson told analysts on the company’s quarterly conference call.

Earlier this month, Goldman Sachs predicted that Starbucks would be the next company to warn about weak Chinese sales. Apple and McDonald’s have already warned investors about softening China sales as a result of the country’s slowing economy.

But Thursday, Starbucks said it remains confident that it can navigate those macroeconomic conditions. John Culver, president of international, channel development and global coffee & tea, said that the coffee giant has proven that it can handle a changing consumer and different economic conditions. This month marks its 20th anniversary in the country.

China, which is also the company’s fastest growing market, saw same-store sales increase by 1 percent during the first quarter. Transactions, however, dropped by 2 percent.

Last year, the company announced a partnership with Alibaba, China’s biggest e-commerce platform, to boost its digital and physical presence in the country. Culver told analysts that he believes that the company is well-positioned to lead delivery in China.

The coffee chain also expects that its alliance with Nestle, which now distributes Starbucks products worldwide, will be a big opportunity for at-home coffee sales in the country.

Starbucks increased its number of locations in China by 18 percent to 3,700 stores during the first quarter of 2019. It now operates in 158 cities in the country. Johnson said that the new stores are “highly profitable” so far.

“I think we’re very comfortable and confident in the strategy that we have in China,” he said.