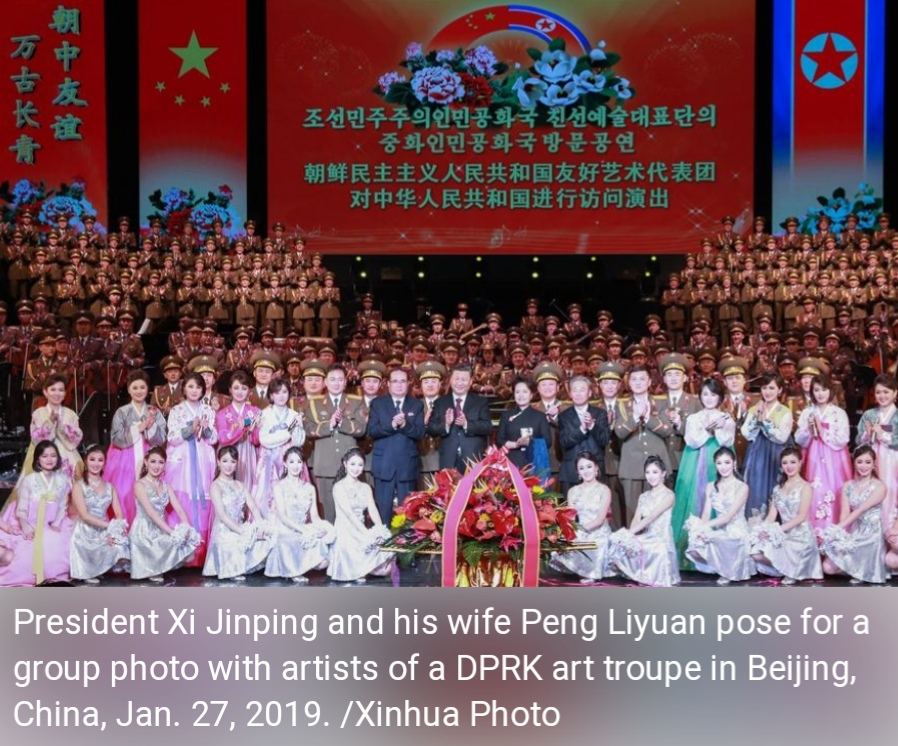 Xi Jinping, general secretary of the Communist Party of China (CPC) Central Committee and Chinese president, along with his wife Peng Liyuan on Sunday met Ri Su Yong, a senior official from the Democratic People’s Republic of Korea (DPRK), and watched a performance by DPRK artists.

Ri, a member of the Political Bureau of the Workers’ Party of Korea (WPK) Central Committee, vice-chairman of the WPK Central Committee and director of the party’s International Department, is leading an art troupe to visit China.

This visit, as an important cultural exchange activity for implementing the consensus reached by the two sides, as well as a significant event in celebration of the 70th anniversary of the establishment of China-DPRK diplomatic relationship, will be a great success to cement the friendship between the two peoples, Xi said.

Xi asked Ri to convey the cordial greetings and good wishes to Kim and his wife.

The president said he and Kim had reached an important consensus on the development of China-DPRK party-to-party and state-to-state relations in the new era during their four meetings since 2018.

Art and cultural exchanges are an important, unique and traditional component in bilateral ties, Xi said, calling for joint efforts in implementing the consensus on strengthening art and cultural exchanges and cooperation, so as to consolidate the foundation of goodwill among the people, carry forward traditional friendship, and promote the development of respective socialist cultures.

This visit and art performance represented Kim’s deep feelings toward Xi and the DPRK people’s profound friendship with the Chinese people, Ri said.

The DPRK side will earnestly implement the important consensus reached by Kim and Xi, strengthen friendly cooperation and contribute to writing a new chapter in DPRK-China friendship, Ri added.

The performance featured famous and popular songs in both the DPRK and China.

The visit of the DPRK art troupe is at the invitation of the International Department of the CPC Central Committee.