With the Chinese economy slowing, concern has increased among Chinese policymakers about the outlook for employment, since ensuring a sufficient number of new jobs is seen as a necessary ingredient in maintaining social stability in the country. Employment was the top priority the Politburo set last July when it shifted its economic policy focus to stabilising growth. That led the government to enact a series of policies to counter rising joblessness. This series explores the employment challenges faced by different segments of the Chinese economy, and this third instalment examines the issues facing the “life services” or “gig” economy.

The cold draft of job cuts returned to China this winter, only three years after the last round, but this time, the safety net for Chinese workers is much thinner.

Chinese internet-based service companies, which served as the employment backstop in the last economic downturn, have themselves fallen on hard times, only adding fuel to rising lay-off worries.

Online search traffic for the keyword “lay-off” has shot up since December to a level higher than at any time since the beginning of 2011 when such data first became available, according to Baidu Index, a Chinese online search tracking service equivalent to Google Trends.

Companies repeatedly highlighted in these searches were not just major exporters or manufacturers, but also internet platforms for ride-hailing, live streaming and food delivery, the heart of the “life services” or “gig” economy. 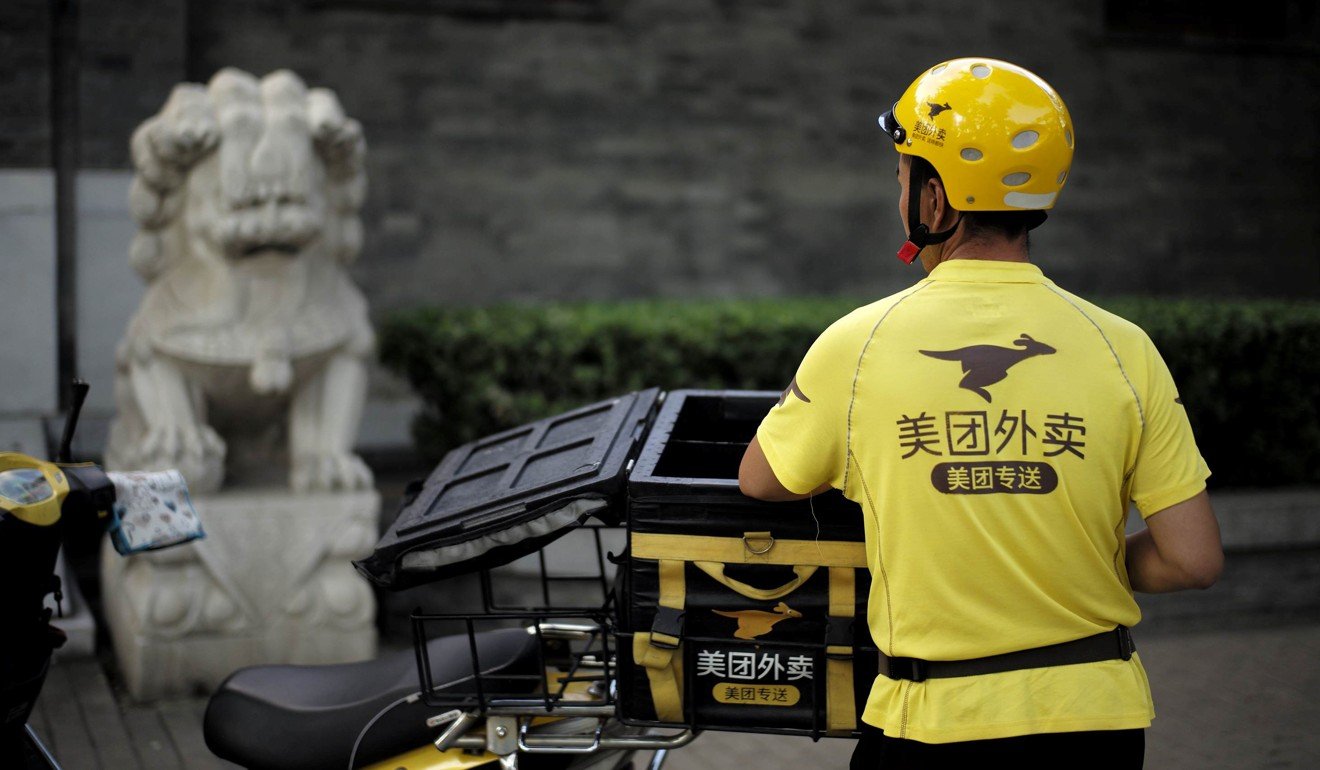 Meituan Dianping is an online platform that generates most of its revenue from food delivery. Photo: Reuters

Over the past few years, the sector has created a vast number of new entry-level, low-skilled jobs, thereby absorbing the millions of workers who have been laid off by heavy industries like steel and mining since 2016, when Beijing launched an economic restructuring campaign to cut excess industrial capacity.

Li Xunlei, chief economist at Zhongtai Securities, recently estimated that from 2015 to 2017, as many as 33.37 million workers who left first and second-tier industrial firms could have begun work in the gig economy, which is also known as the “grey economy” as employment in the sector is not covered by government statistics.

The flexible scheduling available in many gig economy jobs has also attracted many other Chinese workers to the sector to earn extra money working part time.

But in the face of the ongoing economic slowdown, rapidly saturating markets for their services, and stricter regulation by authorities, Chinese gig economy firms have fallen on harder times.

This has sharply limited their ability to absorb lay-offs from other economic sectors and darkened the outlook for the Chinese employment market, even though the creation of a sufficient number of new jobs is the top priority for economic decision-makers in Beijing this year.

“This safety valve for the job market is not working as well as it used to, as many small businesses, and the gig economy, are facing an increase in regulatory constraints,” Ernan Cui, an analyst from search firm Gavekal said.

The national Ministry of Transport in September started to squeeze all “unqualified” ride-hailing drivers, an example of tighter regulation becoming a major constraint on the sector.

Later in November, Didi Chuxing, China’s largest ride-hailing service operator, said that it would push drivers to obtain both licences for themselves and permits for the cars they use.

This regulatory tightening came after two female passengers were killed in May and August last year by rogue Didi drivers, which created a nationwide uproar for better security within the ride-hailing sector.

In some cities, ride-hailing drivers can now no longer obtain operating permits unless they possess a local hukou, a household registration document all Chinese citizens must have that controls access to public services based on a person’s birthplace.

This restriction forces drivers to work in the city, town or village their hukou is tied to, stopping them from travelling to nearby cities to work.

This not only means that many drivers will no longer be able to keep their jobs, adding to unemployment figures, but it also makes it much harder for workers who have been laid off to find a job as a driver.

Between June 2016 to June 2017, Didi absorbed 3.93 million workers who had been laid off from the industries targeted by the capacity cutting campaign, the company said in its employment report for 2017.

But since the new regulation requiring a local hukou for ride-hailing drivers in Shanghai was introduced in 2016, the number of drivers has slumped sharply with only 2.4 per cent of Didi drivers recognised as residents, according the company.

In data released by the China Academy of Information and Communications Technology (CAICT), a research institute under the country’s Ministry of Industry and Information Technology, in the middle of 2018, just 1.1 per cent of the 31.2 million ride-hailing drivers in China met all qualification requirements of the latest municipal regulations.

The companies generating the jobs are also feeling the pain as Didi employees only received half of their expected 2018 year-end bonus, and executives received nothing, Cheng Wei, chief executive officer of the ride-hailing giant, was quoted by ThePaper as saying to an internal meeting in December.

The company was also reported recently to be considering laying off as much as 25 per cent of its staff, according to The Information, which cited an anonymous source, although Didi offered no comment when contacted by the South China Morning Post.

Similarly, live streaming enterprises – who combined for a total revenue exceeding 30 billion yuan (US$4.48 billion) in 2017 – have also been hit by wave after wave of regulatory crackdowns. 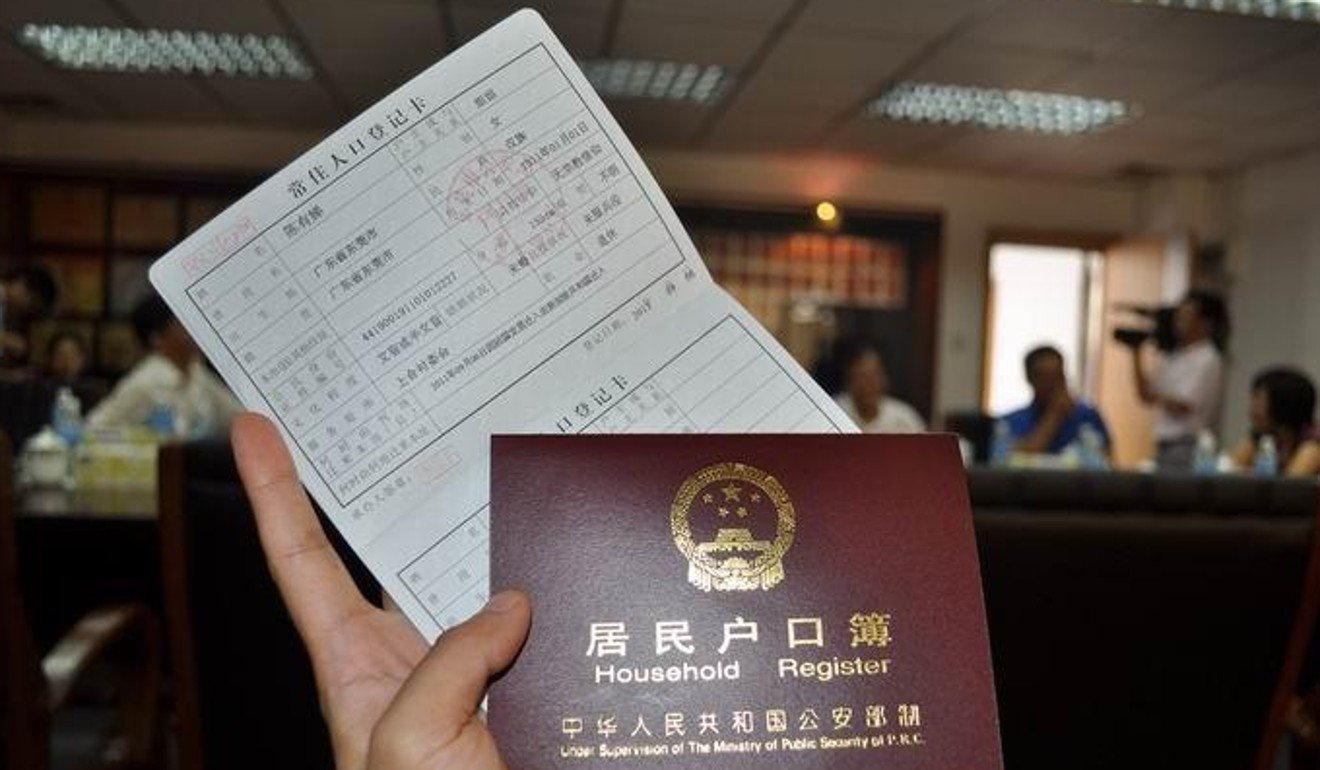 A hukou is a household registration document all Chinese citizens must have that controls access to public services based on the birthplace of the holder. Photo: newsgd.com
Share:

In November, the Beijing municipal government announced they had shut down 530,000 live streaming channels and 800,000 illegal accounts in the previous three months following the implementation of an August 2018 regulation that said all live streamers must use their real names when registering.

Earlier, in June 2017, the China’s Ministry of Culture closed 12 online performance platforms and investigated and penalised 30 applications including the likes of Huya, China’s version of Twitch which primarily focuses on video game live streaming, for violating content regulations.

And amid the increasingly tougher regulation and a slowing economy, investors took up a cautious attitude toward Chinese live streaming companies, leaving many renowned platforms without funding last year.

In December 2018, Chinese internet giant NetEase closed its live streaming operation, only one year after it was launched.

In the same month, Chinese media reported that video-streaming site Douyu had suddenly cut the size of its workforce.

In January 2019, the average number of daily active live streamers in China had decreased 1.3 per cent from the same period last year, and the number of new live streamers had dropped 2.4 per cent, according to data from iresearch.tv, a Chinese industry website focusing on live streaming. 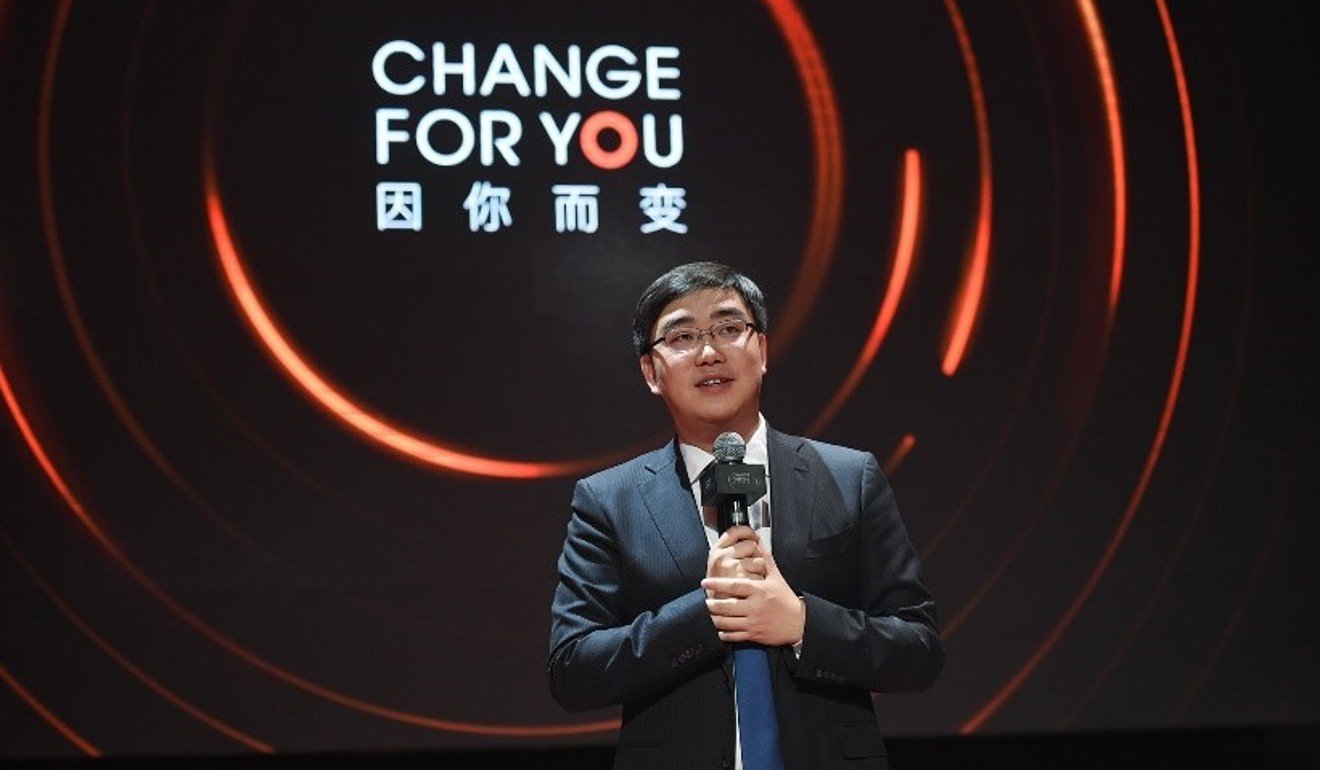 But pressure on China’s gig economy has also come from market saturation.

In a report released last year, Meituan Dianping, an online platform that generates most of its revenue from food delivery, said it expected the growth rate of the food delivery market to slow to 18 per cent in 2018, the fourth consecutive year of deceleration, and well below the 71 per cent rise in 2014.

It projected the growth rate of food delivery users would drop to 15 per cent in 2018 from 51 per cent four years earlier.

Helped by the rise of mobile payment services, on-demand services blossomed and created more job opportunities, with 156,000 industrial workers who had been laid off employed as food delivery couriers for Meituan in 2017, accounting for 31 per cent of all active food delivery couriers on the platform that year, according to a report from the Hong Kong-listed company.

But recently, Meituan reported that it had cut 250 jobs, adding to concerns about the ability of China’s internet companies to generate new jobs.

“Employment in multiple industries might be under pressure in 2019, including the new service industry,” Liang Hong, chief economist at China International Capital Corporation said.

“The growth of nominal income is slowing down, the profitability of businesses has deteriorated, the downward pressures from the real estate cycle are accumulating, the growth of foreign demand remains uncertain, and the growth rate of new service industries has shifted downward.”

Meng Wei, spokeswoman for the National Development and Reform Commission, said in late January that no large-scale lay offs had been seen in the internet-platform industry, but did acknowledge that the Chinese economy, and thus employment, faced downward pressures.

The world’s second largest economy is still pinning its hope on the gig economy to ensure a stable job market, and so help to spur consumer spending and economic growth. 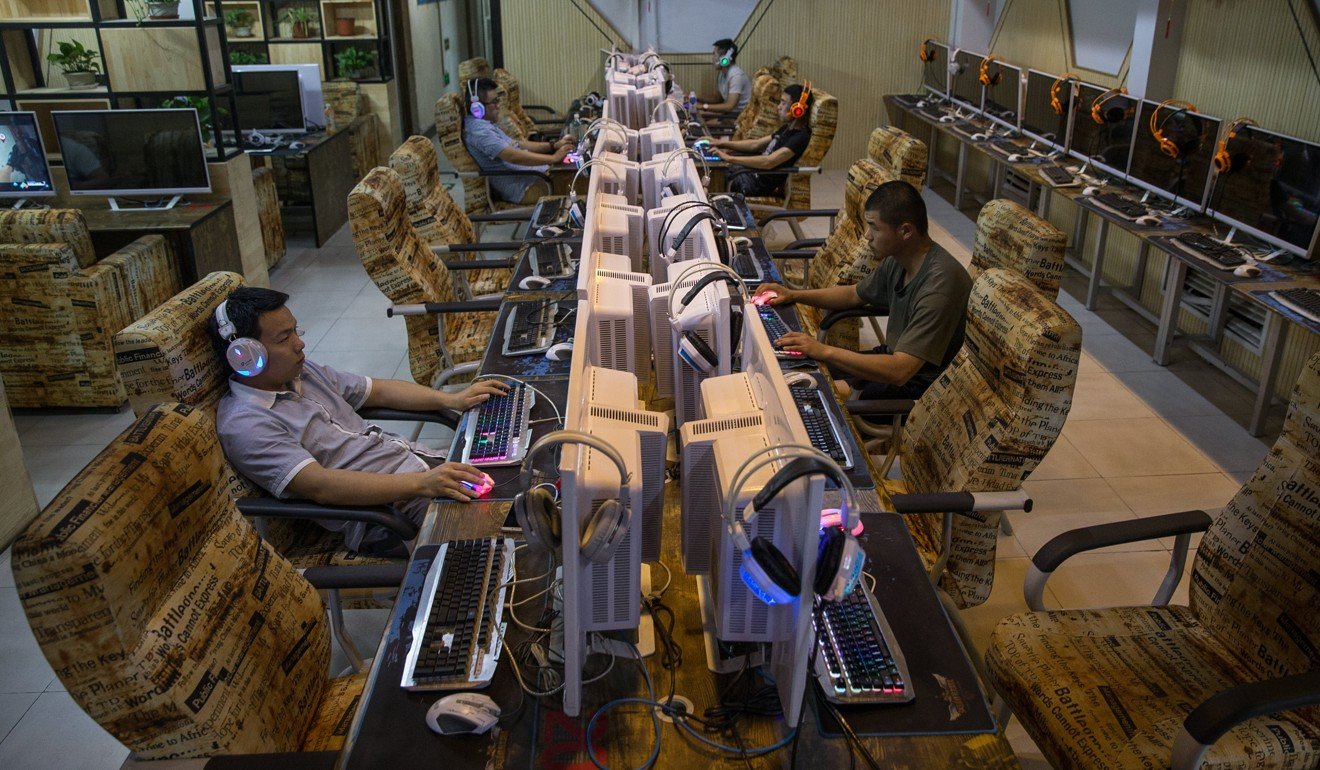 In November, the Beijing municipal government announced they had shut down 530,000 live streaming channels and 800,000 illegal accounts in the previous three months having implemented a regulation in August 2018 that all live streamers must use their real names when registering.

Chinese Premier Li Keqiang said in mid-January that the country would support the development of “new industries, new formats, and new models”, to drive employment growth.

There is some evidence that may show the grey economy is still expanding in China.

Zhongtai Securities chief economist Li suggested more workers may be choosing home-based jobs to account for the rise, with a 10.4 per cent increase in household electricity consumption by urban and rural residents in 2018 compared to a 7.8 per cent gain in 2017.

“The growth of the grey economy will be even faster during the economic transformation [the Chinese economy is currently undergoing],” he said.

“A decline in real per capita income and a skyrocketing of household electricity consumption will occur at the same time.”

Analysts from Everbright Securities said the rise of the gig economy means Beijing needs to shift its focus on how to combat increasing jobless pressure.

“The necessity of stimulating the infrastructure and property markets is dramatically lower than before,” they said.

“The rise of life service industries is closely linked with the development of the internet, preferential taxes, and government subsidies.”

However, players within the gig economy remain cautious about the sector’s outlook.

“2019 may be the worst year over the past decade, but it will be the best year in the next decade,” Wang Xing, the co-founder of Meituan, wrote on his microblog in December.

The fourth instalment of this series will examine the challenges faced by foreign firms in China.