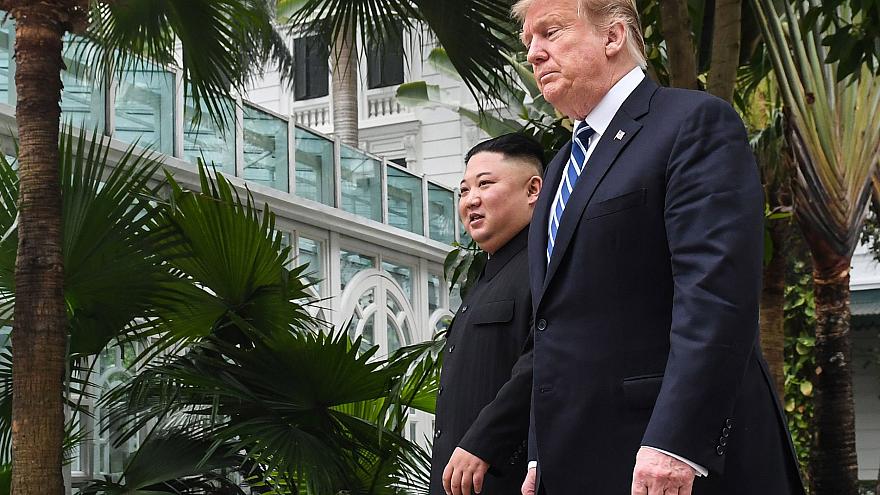 Analysis: Trump lost big at N. Korea summit, but it could’ve been worse

HANOI, Vietnam — President Donald Trump cut his losses here Thursday.After traveling halfway around the world for a face-to-face meeting with one of the world’s most notorious despots — with hopes of persuading the dictator to give up his nuclear weapons cache — the president who considers himself the world’s ultimate deal-maker pushed away from the negotiating table with nothing more in hand than he had arrived with.”Sometimes you have to walk,” Trump said at an unusually tame post-summit press conference. “I think that was one of these times.”

It would be easy to simply stack the summit atop a gathering pile of political, policy and personal humiliations for Trump in recent months.That treacherous hill includes a historic loss of House seats by his party in November’s mid-term elections; a 35-day government shutdown that he said he was “proud” to own; Congress’ rejection of his proposal to fund a border wall between the U.S. and Mexico; the indictments and convictions of several of his closest associates by special counsel Robert Mueller; and even the allegations leveled Wednesday by his former fixer, Michael Cohen, that he ran his business and presidential campaign as a “cheat” and a “con man.”Without a doubt, Trump put himself in a hole by agreeing to come meet Kim in the North Korean’s backyard for a second nuclear summit without so much as a promise that Pyongyang would begin winding down its weapons program.But what Trump sacrificed in prestige, time and energy pales in comparison to what he — and the U.S. — might have lost had he made the concessions to Kim necessary to strike a deal.Victor Cha, the Korea chair at the Center for Strategic and International Studies and an NBC News contributor, called the summit “an outright failure” Thursday. But, he said, “Trump made the right decision to push for more than minimal steps and take no deal over a bad deal.”

Trump revealed just how bad a deal it could have been in outlining the sticking points of a discussion centered around the removal of economic sanctions on Pyongyang in exchange for North Korean disarmament.”Basically they wanted the sanctions lifted in their entirety, and we couldn’t do that,” Trump said. “They were willing to denuke a large portion of the areas that we wanted, but we couldn’t give up all of the sanctions for that, so we continue to work and we’ll see. But we had to walk away from that particular suggestion. We had to walk away from that.”Before the talks broke down, NBC News reported Wednesday night that U.S. officials had abandoned their demand that Kim make a full accounting of his nuclear weapons and ballistic missiles programs.Like the trip itself, that suggested a strong desire on Trump’s part to reach some sort of agreement with Kim before leaving Vietnam. Trump’s schedule for Thursday even included a planned signing ceremony for an agreement that never materialized — a ceremony that was abruptly canceled because the two sides couldn’t reach a deal.

Even before he landed in Hanoi earlier this week, Trump’s appetite for an accord appeared strong enough to North Korea experts that many worried he would be suckered into a bad deal with Kim. Some of his critics saw a president desperate to score points on the international stage because of his domestic political troubles.Trump didn’t go so far as to say that he put himself in a position in which he had no good options — but he came close.”At this time, we had some options,” he said. “And at this time, we decided not to do any of the options.”No option may have been the best option.And for a president who seems fond of driving himself into box canyons and refusing to shift into reverse, that’s a different tack.Politics

It has not always been the case that Trump has picked the least disastrous path. For five weeks earlier this year, he kept the government partially shutdown in an ill-fated attempt to force Democrats to fund a border wall. At the end of the process, he got less money for fencing from Congress than lawmakers were willing to give him before the shutdown.Now, though, his decision to stay away from the dramatic deal-making moment is likely to please a wide range of North Korea experts in the U.S. More important, after bowing to Kim by agreeing to come to Hanoi without a deal ready to go in the first place, he didn’t give away anything else.That was a small victory wrapped in a larger defeat. But it wasn’t the worst possible outcome for Trump.