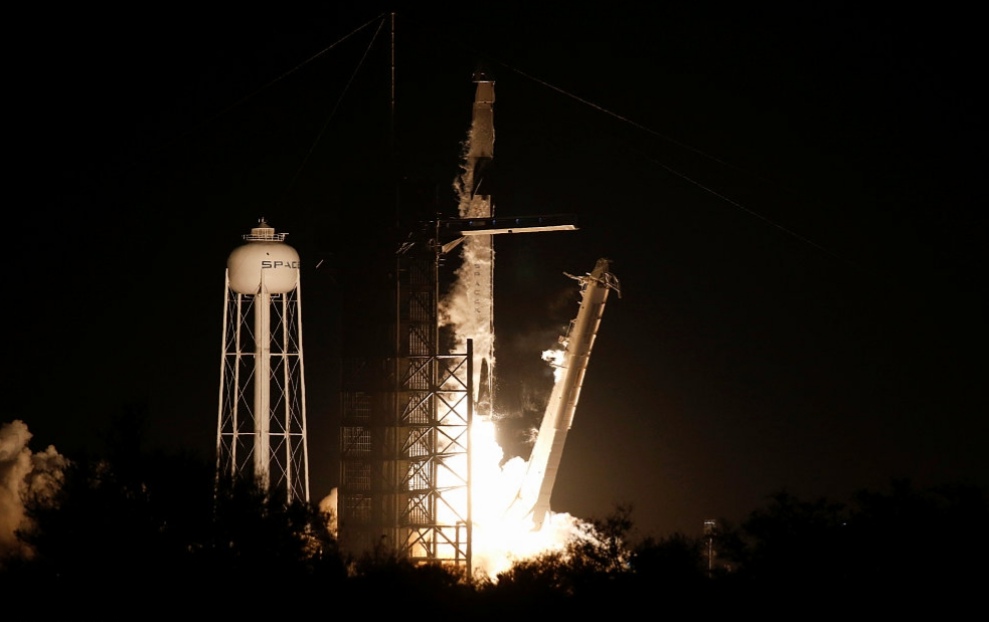 A SpaceX Falcon 9 rocket, carrying the Crew Dragon spacecraft, lifts off on an uncrewed test flight to the International Space Station from the Kennedy Space Center in Cape Canaveral, Florida, US, March 2, 2019.

March 2 — An American spacecraft designed to fly astronauts to the International Space Station (ISS) from the United States was launched Saturday morning for its debut unmanned flight.

About 11 minutes after blastoff, the Crew Dragon separated from the second stage of the rocket, and headed for an autonomous docking with the space station on Sunday.

The test flight is intended to show the transport capabilities of SpaceX, a private company and contractor of the U.S. space agency NASA for ISS flights. The move came eight years after NASA’s space shuttle retired, leaving it dependent on Russia’s Soyuz spacecraft to fly crews to the station.

“Today’s successful launch marks a new chapter in American excellence, getting us closer to once again flying American Astronauts on American rockets from American soil,” said NASA administrator Jim Bridenstine after the launch.

This is the first test mission of a commercially-built and operated American spacecraft and rocket designed for humans, according to NASA.

“Demo-1 is a demonstration of the Falcon 9 rocket, Crew Dragon spacecraft, ground systems and overall operations, basically just everything that needs to be operating and operating well before we want to put our astronauts on board,” said Mike Lee, NASA mission manager for SpaceX’s Demo-1 flight test.

The 7-seat spacecraft used in this Demo-1 mission a dummy astronaut with a sensor-equipped spacesuit to collect the capsule’s environmental data.

The crew capsule has eight 3D-printed SuperDraco escape engines, which could fly the vehicle out of harm’s way during a launch emergency. If the Demo-1 is successful, there will be a high-altitude abort test for the escape system before the Demo-2 mission brings two astronauts into space, now targeted for July.

The spacecraft is expected to take about 180 kg of crew supplies and equipment into the station and will remain docked there for five days. It will autonomously undock with the station on Friday and make a splashdown in the Atlantic Ocean on March 8, according to NASA.

“We need to make sure that it can safely go rendezvous and dock with the space station, and undock safely, and not pose a hazard to the International Space Station,” said Kathy Lueders, manager of NASA’s Commercial Crew Program during a briefing before the launch.