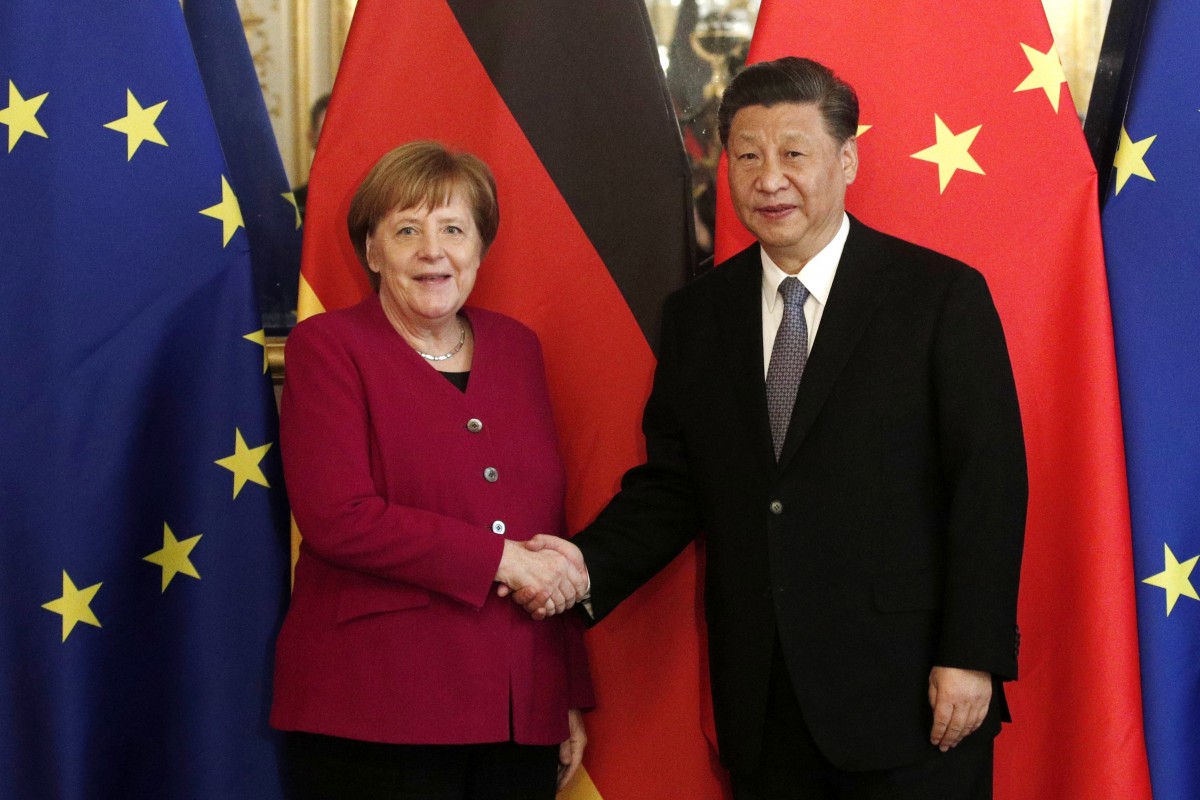 European and Chinese leaders sought to reassure each other over economic cooperation on Tuesday despite the increasing US move towards protectionism, as leading EU figures said they were still open to joining China’s Belt and Road Initiative.

French President Emmanuel Macron, who is hosting his Chinese counterpart Xi Jinping on the final leg of his European tour, had invited German Chancellor Angela Merkel and European Commission President Jean-Claude Juncker to the meeting in Paris, where the four stressed their support for multilateralism and the pursuit of “mutual trust”.

Xi said that China was determined to protect the world’s multilateral system, and was ready to continue with “opening up”.

He also invited European countries to join the belt and road scheme – which Washington has characterised as a Chinese “vanity project”.

The project has caused increased concern in the West about the extent to which it will help spread Chinese influence, especially since Italy became the first G7 economy to join the project over the weekend.

But Merkel stressed it was an important project that Europeans still wanted to participate in.

She continued: “We, as Europeans, want to play an active part and that must lead to a certain reciprocity and we are still wrangling over that a bit.

“We are seeing the project as a good visualisation of interaction, interrelation and interdependence.”

The visit took place amid growing European scepticism about China’s influence and follows a decision by Brussels to brand China a “systemic rival” in a policy paper earlier this month.

“We understand that China does not like the expression ‘rivals’, but it is a compliment describing our shared ambitions,” Juncker told a press conference. 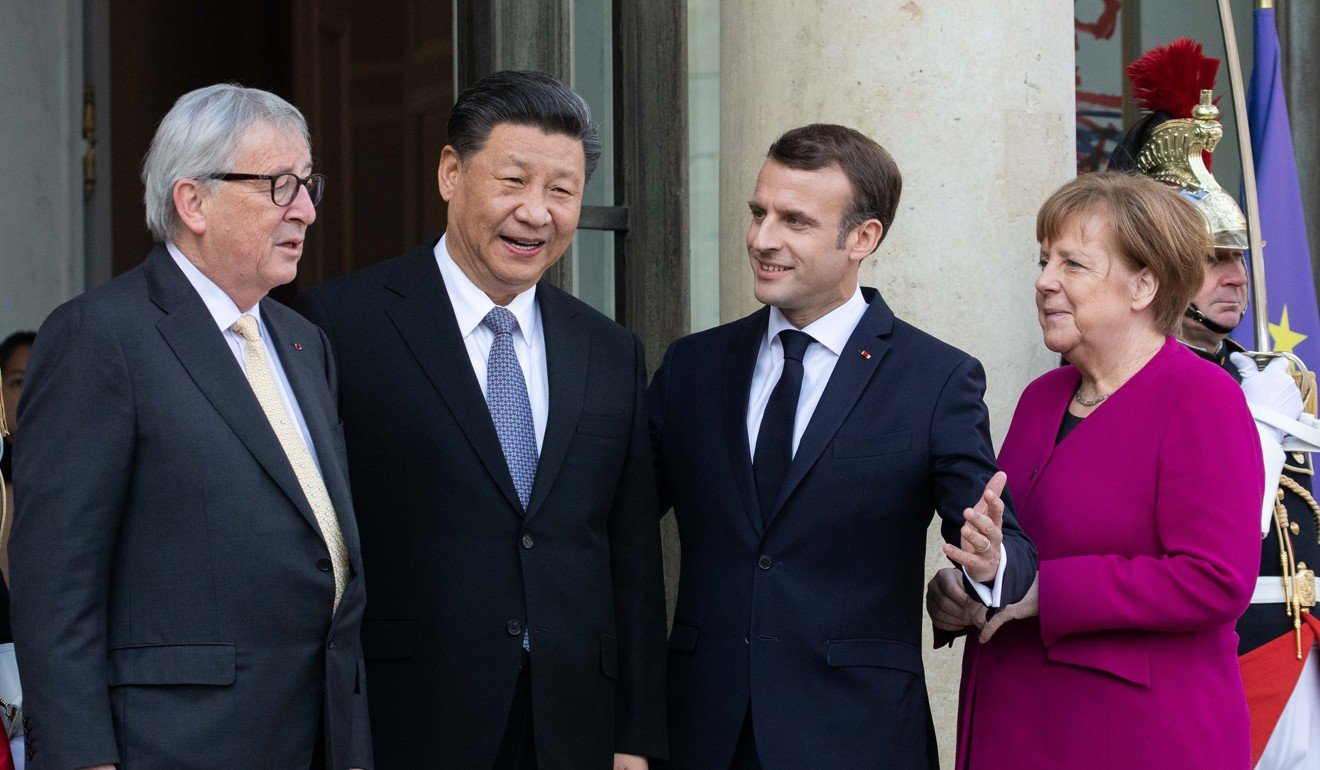 The EU and China also share concerns about the growing US trend towards protectionism – as manifested in the ongoing trade war between Washington and Beijing.

Xi also said China’s process of opening up its economy to the world had allowed the country to achieve in the space of 40 years what the Europeans had managed over the course of the industrial revolution.

“We will continue to open up,” he said, “and to make the world a better open economy.”

He also tried to reassure his European counterparts by saying: “In today’s China-EU relationship, cooperation is the defining feature even if there are differences or competition to some extent.

“The Belt and Road Initiative has enriched the world’s multilateral system, we invite all countries, including France, to join,” Xi said.

Xi’s speech appeared to go off script at one point as he looked away from the printed text before him and began gesticulating as he spoke.

“We are marching forward side by side and we should not become suspicious,” he said.

The US has also put increasing pressure on European countries to block the Chinese tech giant Huawei, which it sees as a security threat, from playing a role in European communications networks.

Despite her support for Xi’s stance on multilateralism, Merkel was still keen to express support for America’s role in upholding global order.

“The triangle between EU, China and US is very important. Without the US, we will not be able to have multilateralism. Our relations from the European side are obviously very important,” Merkel said.

However, she also noted that the trade war between the US and China was “hitting our German economy” and disturbing the balance.

Macron said that the four leaders had discussed “friendship” as well as “existing rivalries” between the EU and China and agreed to seek a “trust-based partnership.”

“Our common will is to avoid … new trade conflicts and isolationist policies”, Macron said.

Days before meeting Xi, Macron said on Friday at a news conference that “The period of European naivety is over,” when commenting on Chinese investment in the continent. He also said that letting Chinese companies buy up EU infrastructure such as ports had been a “strategic error”.

But Nicola Casarini, a senior fellow for Asia at the Institute of International Affairs in Rome, said he believes the positive note on the EU leaders tried to strike on the Belt and Road was more than just politeness.

“Merkel and Junker’s positive tone on the Belt and Road Initiative is sincere and the EU wants to collaborate with Beijing,” he said.

Casarini also argued that many in Europe were “in favour of closer ties with China in a situation characterised by US unilateralism and coldness in transatlantic relations”.

“The problem for the EU is not China, but individual members joining or embracing the project without prior consultation with Brussels,” he said.

“[European powers] are waiting to see whether there will be changes in the way China will develop the BRI in the future – ie whether Western norms and principles will be taken on board,” he said.

Casarini added that Macron had helped the EU achieve a more unified stance on China by getting France, Germany and the Commission to speak with one voice.

François Godement, senior advisor for Asia at the Institut Montaigne in Paris, said Juncker’s comments that branding China as a rival was a “compliment” was a way of saying that China’s behaviour towards Europe “has now got our attention” but the bloc wants action rather than words when it comes to delivering on its pledges.

“France is making strengthening the European negotiators’ hands its first priority – however, that does not exclude compromises.”