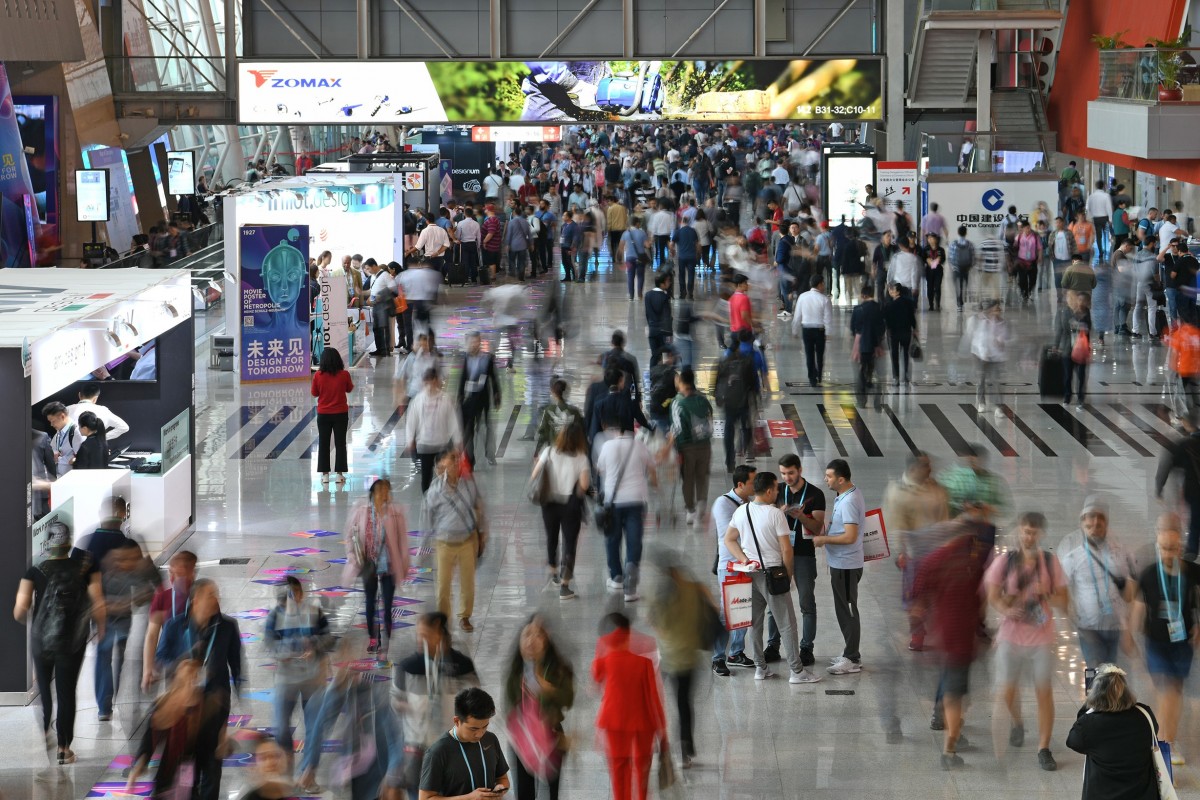 The optimism expressed by officials from China and the United States suggesting the trade war is almost over has not trickled down to small exporters exhibiting their products at China’s largest export fair, who fear that, with or without a deal, the heyday for Chinese exports is over.
Exporters at the Canton Fair in Guangzhou, the country’s biggest export exhibition held every spring and autumn, remain cautious over the outlook for US-China trade relations and the prospects for selling products to the US.
Fiona Chan, a sales manager for a marble and polished stone exporter, said the trade row had delivered a heavy blow to her company, with its main business focused on selling products to the US market. The company’s products have been subject to both anti-dumping tariffs as an additional 10 per cent tariff imposed by US President Donald Trump on US$200 billion of Chinese products imported into the US.

“We used to have 10 production lines running [before the trade war], now we have only two running; and the number of workers has been cut to 40 from around 200,” she said. “The trade dispute will continue to affect us for years to come, and as a small business, our only choice is to passively accept it.”

We are not as important as Huawei, and our voices are not heard in trade negotiations, but the industry as a whole has suffered and a lot of businesses have gone bankrupt.
Fiona Chan

China’s small exporters are bearing the brunt of the trade frictions and their voices are not often listened to, she added.
“We are not as important as Huawei, and our voices are not heard in trade negotiations, but the industry as a whole has suffered and a lot of businesses have gone bankrupt,” she said.

Chan added that her company lost all its US orders last year when the US Department of Commerce decided to impose anti-dumping tariffs as high as 314 per cent to Chinese “quartz surface products”, which are widely used for kitchen and bathroom counters. The anti-dumping ruling means the US government determined that the Chinese products were being sold in the US at a price below what is being charged in China.

Andy Wong, an export manager of Guanya Lighting, said that his company, which mainly sells desk lamps, is struggling to make adjustments to the new global trade reality, in which bulk orders for thousands, or even tens of thousands, of lamps from US and European retailers have disappeared, replaced by small orders from smaller buyers in “Belt and Road Initiative” countries in Asia and Africa as part of China’s plan to grow global trade.

US Treasury Secretary Steven Mnuchin (left), Chinese Vice-Premier Liu He and US trade representative Robert Lighthizer have been at the forefront of negotiations to end the trade war. Photo: Xinhua
Share:

“We used to set a minimum order of 1,000 units. Now we take minimum orders of 20 units,” he said.
While the US accounts for only about a tenth of his company’s total sales, another sales manager at a battery company who declined to be identified, said he is concerned about the difficulties in the ties between the world’s two biggest economies. The ideal situation for supporting trade would be a stable, positive status instead of back-and-forth conflict, in which the US imposes tariffs on Chinese products at will, he said.
“‘Uncertainty’ is a curse word for exporters. The US-Japan trade dispute took many years to settle. Will we take a long time [to settle the US-China trade dispute] as well?” he asked.
In the exhibition hall in Guangzhou, buyers from Europe and the US were outnumbered by purchasers from countries that participate in China’s Belt and Road Initiative.
“The American and European buyers only showed up at almost noon because they have got problems with jet lag. But, you will find that the obvious characteristics of this session, most of the buyers come in at the same time as early as our Chinese exporters do. That means they are not from the US and Europe, and they have no problem over the jet lag. It’s really not a good signal for those traders focusing on the American and European Union market.” Chan said.