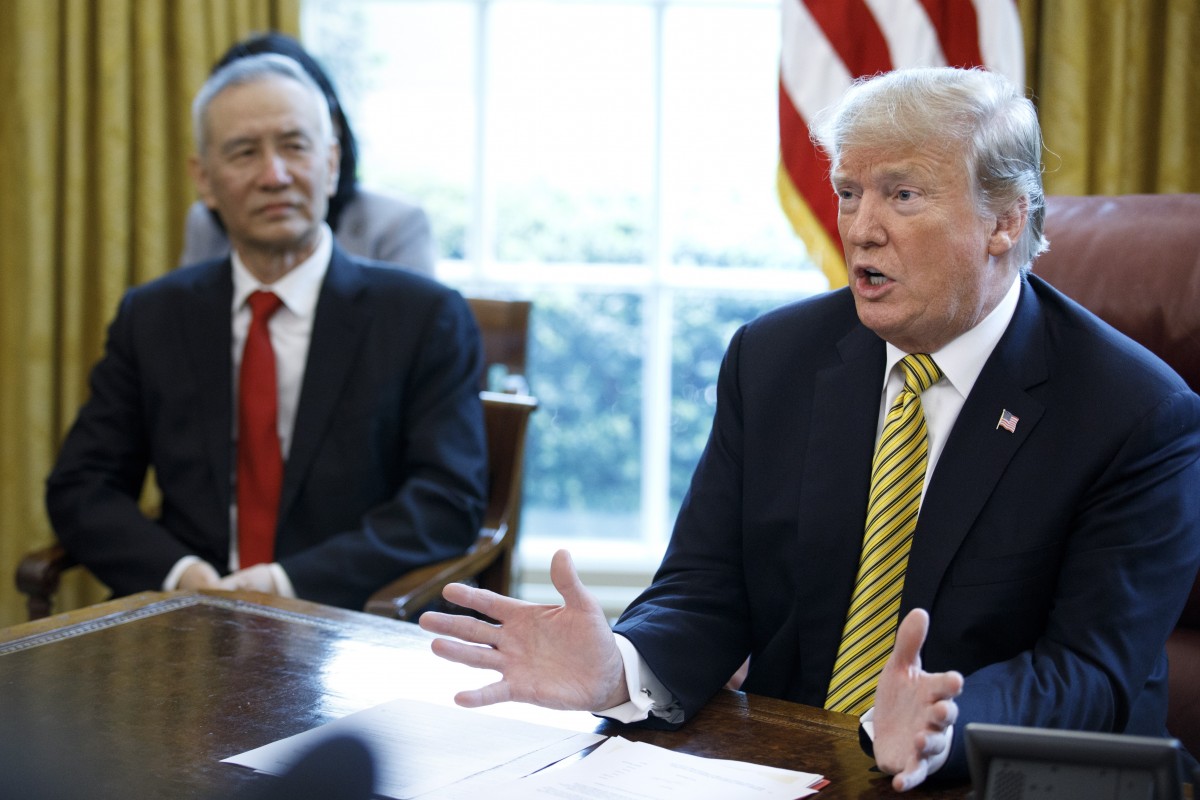 This updates a previously published story with new information.
China is still preparing to send a delegation to Washington for the trade talks despite the latest threats by US President Donald Trump to increase tariffs, Foreign Ministry spokesman Geng Shuang said on Monday.
“There have been many times that the US side has threatened to increase tariffs,” Geng said when asked about Trump’s tweets on Sunday which threatened to impose punitive tariffs on US$200 billion of imports from China tariffs beginning on Friday. “China’s positions are clear and the US side is well aware of them.

“[We have hoped] to make progress in our trade talks and [we] hope the US side can work together with us and move in the same direction so we can achieve a deal that can benefit both sides. Everyone in China and abroad is very concerned about the next round of talks, and we are also learning about the relevant changes. The Chinese delegation is preparing to go to the US for the negotiations.”

There were high hopes that Liu’s trip to Washington this week for the 11th round of talks would produce a deal to end the trade war which has ravaged the global economy for almost a year.
But after Trump tweeted on Sunday that punitive tariffs on US$200 billion of imports from China will increase from 10 per cent to 25 per cent on Friday, Beijing must now consider whether to bow to the pressure from the United States and make more concessions, or break off negotiations altogether rather than appear to cave in to US demands.

Liu could depart Beijing on Thursday, three days later than previously scheduled, and leave Washington a day later, the source who has been briefed on the latest arrangements confirmed.

Another source said both sides remain committed to a final agreement, but Trump’s threat puts the Chinese delegation in a difficult position as any agreement could be perceived by the domestic audience as a capitulation to the White House.

Everyone in China and abroad is very concerned about the next round of talks, and we are also learning about the relevant changes. The Chinese delegation is preparing to go to the US for the negotiations.
Geng Shuang

Trump’s threat of additional sanctions on Chinese imports revealed his impatience due to a lack of sufficient concessions from China, with sources suggesting that President Xi Jinping vetoed additional concessions proposed by his negotiators.
Sources familiar with the discussions said the proposals submitted to Xi included one that promised more concessions.
“Xi told them ‘I’ll be responsible for all possible consequences’,” the second source said. Chinese negotiators subsequently presented a tougher proposal to Washington, although it is not clear if they pitched an amended proposal to Xi after the latest round of talks in Beijing last week.
Trump also stated the US may impose extra duties on additional goods shipped from China, with US$325 billion in Chinese goods still untouched by the stand-off set to become subject to the 25 per cent “soon”.

Lu Xiang, an expert on China-US relations from the Chinese Academy of Social Sciences, said Trump was pursuing a strategy of putting maximum pressure on China.
“If China cancels the trip, Trump would blame China for the failure of the trade negotiations,” he said.
One possible response from China could be to send a smaller delegation to US, he said.

After the intensive talks, China is familiar with the style of Trump and his administration. Trump’s flip-flop announcement is not a big surprise for China, but China should be prepared for the worse-than-worst scenario.
Lu Xiang

“After the intensive talks, China is familiar with the style of Trump and his administration. Trump’s flip-flop announcement is not a big surprise for China, but China should be prepared for the worse-than-worst scenario”, added Lu.
Shi Yinhong, a professor on international relations from Renmin University in Beijing, said the strong US economy provided Trump with the confidence to put pressure on China for further concessions because a favourable trade deal would help him in the 2020 presidential election campaign.
“It is still possible to see a trade deal in the short term, but the bilateral confrontation will last longer, including in trade, politics and ideology,” said Shi.

U.S. Ambassador to China Terry Branstad (left), US Treasury Secretary Steven Mnuchin, US Trade Representative Robert Lighthizer and Chinese Vice-Premier Liu He in Beijing last week. Photo: Reuters
Share:
Trump’s latest move followed signals that the most recent round of talks in Beijing last week did not yield progress on some key US demands, including a curtailment of China’s subsidies to its state-owned enterprises – one of the factors that prompted the US government to start the trade war.
The US economy grew at a faster pace than expected in the first quarter of 2019, posting its best growth to start a year in four years after gross domestic product expanded by 3.2 per cent, according to the Bureau of Economic Analysis.
Trump imposed duties of 25 per cent on an initial US$50 billion of Chinese goods in July and August last year and then 10 per cent on an additional US$200 billion in products in September. A scheduled increase to 25 per cent on the later batch was put on hold after talks between Trump and Xi in Argentina in December.
Doubts about whether US trade representative Robert Lighthizer and Liu were close a deal emerged last week, when Myron Brilliant, the US Chamber of Commerce’s head of international affairs, suggested China is balking on providing any assurances that they would cut back on subsidies provided to state-owned firms.
Lighthizer was in Beijing with US Treasury Secretary Steven Mnuchin last week for the 10th round of talks since the trade war started.
“We’re likely to get language that … touches on transparency, but we’re not likely to get the commitment that we want from the Chinese, in terms of they’re really cutting back and eliminating subsidy practices, not just in the steel and aluminium sectors but in a range of sectors,” Brilliant said.

Lighthizer has expressed particular concern with the use of subsidies in the “Made in China 2025” industrial policy initiative that seeks to create global leaders in a range of cutting-edge hi-tech industries at the expense of the US and other developed countries. Subsidies and Made in China 2025 formed part of the justification for starting punitive trade action against Beijing.
Mnuchin said just before he and Lighthizer headed to Beijing last week for a 10th round of talks that the US side expected to “either recommend to the president we have a deal or make a recommendation that we don’t”.
Reaction from China did not confirm the seemingly fixed deadline, and suggested that Beijing is resisting pressure from Trump’s team.
Taoran Notes, a social media account used by Beijing to release trade talk information and to manage domestic expectations, said the hints from the US side that the 11th round of talks are a deadline was merely a trick “to increase tensions and generate pressure on the other side”.
“It’s the same tactic as the US threatening to raise tariffs. It is merely smoke and mirrors to exert extreme pressure [on China],” the post said. “You don’t have to take it seriously.”
This article appeared in the South China Morning Post print edition as: trade team set for talks despite trump threat