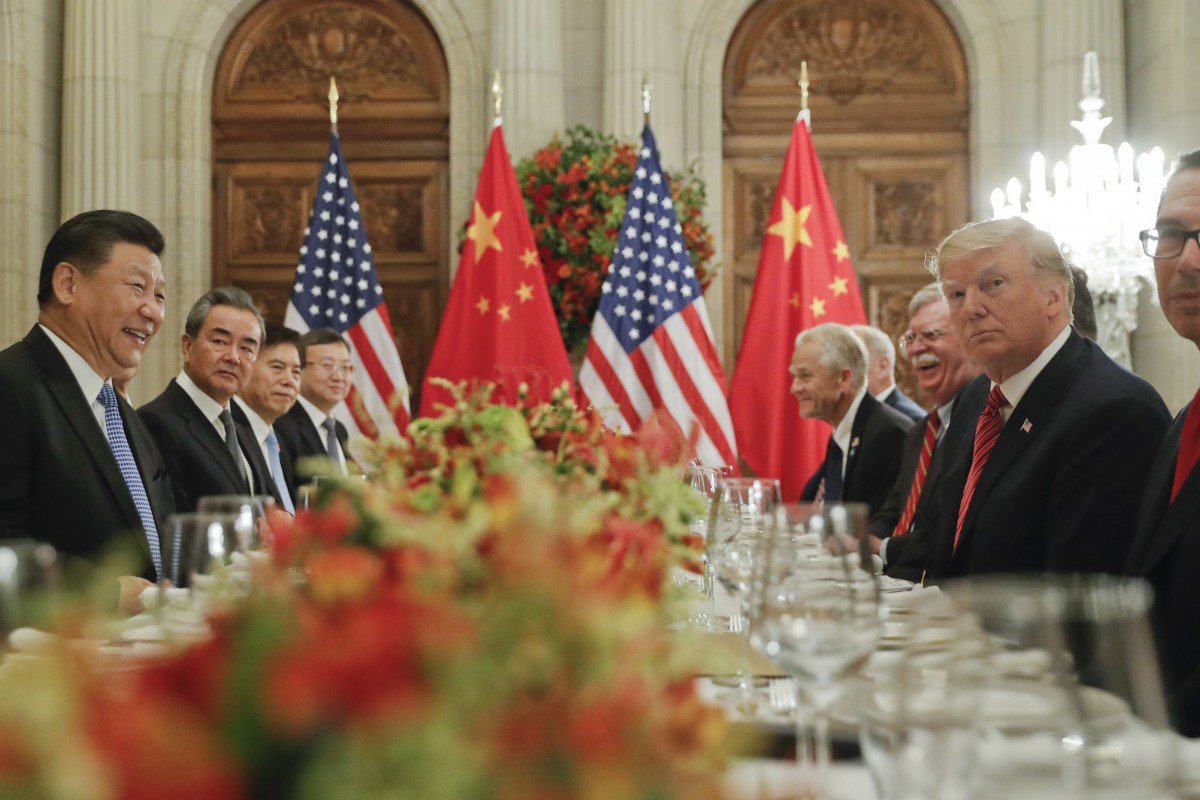 Trump-Xi trade war summit at G20 in Japan still up in the air as ‘conditions not right’, China adviser says

US President Donald Trump and China’s President Xi Jinping last met in Argentina in December on the sidelines of the G20 summit. Photo: AP

A meeting between Chinese President Xi Jinping and US President Donald Trump at the G20 summit in Japan next month is still up in the air as the “current conditions” are not right, a Chinese state researcher said.

“Given the current conditions, what can really come out of the G20?” said Zhang Yansheng, the chief research fellow at the state-backed China Centre for International Economic Exchanges think tank, at a government-arranged press briefing on Wednesday. “We in the East need to save our face whereas the Americans have complete disregard for that. I think we need to wait and see.”

While Zhang’s agency is not directly involved in planning Xi’s overseas trips, his comments suggest that Beijing is not in a rush to arrange a formal sit-down summit between the two leaders as they did in Argentina in December, playing down expectations that Trump and Xi are likely to meet next month to break the impasse in the trade talks.

China’s foreign ministry spokesman Lu Kang said on Thursday that China is open to resuming the trade talks, but that the sanctions the US placed on Huawei and other Chinese firms last week are “not helping to create a conducive environment for negotiations”. China’s Ministry of Commerce spokesman Gao Feng did not answer a question at a briefing, also on Thursday, over whether Xi and Trump will meet in Osaka.

The dispute between Washington and Beijing further escalated last week when Trump banned US companies from using foreign telecommunications equipment deemed to be a national security risk. He also added China’s Huawei, the world’s largest telecommunications equipment maker, to a trade blacklist. As a result, Huawei suppliers including Google, have suspended their shipments of certain hardware components, software and services.

Trump, though, said last week that he would meet Xi on the sidelines of the G20 summit, which will take place in Osaka on June 28 and 29.

“Maybe something will happen,” Trump said. “We’re going to be meeting, as you know, at the G20 in Japan and that’ll be, I think, probably a very fruitful meeting.”

A formal bilateral summit between Trump and Xi in Osaka would be seen as a sign of significant deceleration in tensions between the world’s largest economies. The summit in Buenos Aires in December, which was conducted in the form of a sit-down dinner, resulted in a three-month tariff truce which was then extended again when the original deadline was reached.

But if there is no formal bilateral meeting between Xi and Trump, it would be seen as a sign that there will be no near-term trade deal and could even be taken as a bad omen that the trade and technology disputes between the two countries could worsen and cast a further shadow over global markets and economic growth prospects.

A Japanese diplomatic source told the South China Morning Post that nothing has been settled, although Trump and Xi would have plenty of chances to talk to each other during the G20 summit even without a formal sit-down bilateral meeting.

Washington would have to “fly someone to Beijing to make arrangements” for a face-to-face summit between Trump and Xi to happen, the source added.

US Treasury Secretary Steven Mnuchin said on Wednesday that he expects to visit Beijing “in the near future”, suggesting the US may hold another round of trade talks with China ahead of a possible summit.

China’s official media outlets have also ramped up their nationalistic rhetoric against the US after the trade talks broke down with no plans in place for further discussions, while Xi has rallied the country to embark on a

suggesting the government is prepared for drawn-out trade hostilities.

Li Yong, the deputy secretary general of the China Association of International Trade, a trade policy advisory group under China’s Ministry of Commerce, blamed the “trust deficit” between Beijing and Washington as well as a “weaponised narrative” and “hostile assumptions” made by US administration for intensifying trade tensions.

Li agreed that it is now too early for the two sides to return to the negotiating table, especially for the US side.

“During the [Barack] Obama period, the rise of China was welcomed. Now with Trump, this isn’t the case. They pressure and provoke [China]. [What’s happening has been] troublesome interactions,” Li said on Wednesday.

“We’ve always believed is that we could work with the US in other ways to boost economic ties, but from we’ve seen from the US recently, we need to revisit [that belief]. But China will not be deterred no matter how big the challenge is.”

How & Where to Gamble When Travelling in the Middle East.

Hiccups in a newborn could mean their brains are developing say researchers.

Prada will host its Resort 2021 fashion show in Japan.

How to find out if you’re eligible for Italian citizenship by descent.