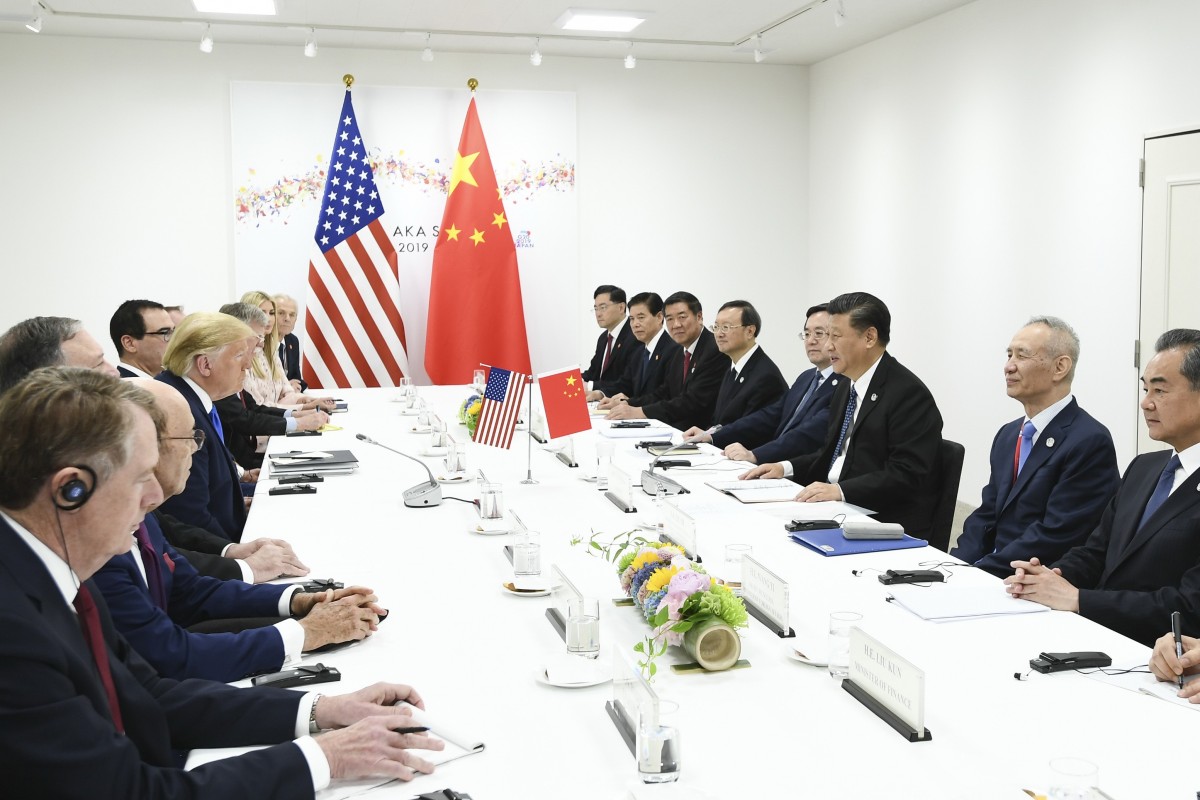 China has insisted that all tariffs on Chinese imports added by the United States during the trade war must be scrapped immediately as part of any deal to end the year-long conflict, which would require the Trump administration to give up its position that some levies remain in place even after an agreement is reached.

US President Donald Trump agreed to pause placing tariffs of up to 25 per cent on an additional US$300 billion of Chinese imports not yet subject to taxes after his meeting with Xi Jinping at the G20 summit last weekend in Japan.

But for any deal to be reached, US tariffs of 25 per cent on US$250 billion of Chinese imports that remain in place must be removed, said Ministry of Commerce spokesman Gao Feng on Thursday, underscoring that there are still many issues to be resolved to end the conflict as it approaches its one-year anniversary on Saturday.

“The US tariff hike on Chinese products was the trigger for bilateral trade frictions, so all the additional tariffs imposed since [the beginning of the trade war in July 2018] must be scrapped once there is a deal,” Gao said at Thursday’s regular media briefing in the first public comments on China’a demands for a trade deal since the truce was announced in Osaka.

“Consultations must be conducted based on the principles of mutual respect, equality and mutual benefit. The deal must be balanced, equal and mutually beneficial. China’s core concerns must be addressed.”

Trump said on March 21 that he wanted some tariffs to remain in place for a “substantial period of time”, even extending beyond any trade deal.

“We’re talking about leaving [the tariffs in place] for a substantial period of time because we have to make sure that if we do the deal with China, that China lives by the deal,” Trump told reporters outside the White House at the time.

Washington’s refusal to remove all tariffs and its long-list of burdensome demands were key reasons why trade negotiations broke down in early May, Vice-Premier Liu He, China’s top negotiator, has previously said.

Trade teams from both countries remain in contact, Gao said, without providing any time frame for the resumption of formal, face-to-face talks. Agricultural product trade would be an important issue to be discussed with large room for cooperation in the area, Gao added. China cut back its purchases of US farm products during the trade war before buying a large quantity of US soybeans ahead of the Xi-Trump meeting.

In response to US sanctions against Huawei and other Chinese companies, China is continuing the process of setting up an “unreliable entity list”, Gao confirmed, with foreign companies deemed to be harming Chinese firms for non-commercial reasons facing sanctions if they are placed on the list.

Larry Kudlow, Trump’s chief economic adviser, said on Wednesday that officials from both sides will talk by phone in the coming week.

As suggested in previous rounds of negotiations, there are still many difficult issues that must be addressed to reach a trade deal, including China’s purchase of American goods to narrow the trade imbalance, the US demands that China end forced technology transfers, as well as better protection of intellectual property.

China’s demand that the sales ban on Huawei be lifted, and the US requirement that there be some form of enforcement mechanism to ensure any trade deal is fully implemented, also need to be addressed.

Tao Dong, Credit Suisse Private Banking’s vice-chairman for the Greater China region, told a forum in Hong Kong on Thursday that China and the US are likely to reach a deal before the end of 2019.

“However, a deal will be of no avail,” Tao said. “Trump had threatened to impose tariffs on Mexico when the ink on the [United States – Mexico – Canada Agreement] with Mexico was not dry yet”.

Tao also stressed the rivalry between China and the US would be a long-term issue with no near-term end in sight. “Trump might be the worst president for China to deal with in the last five US presidencies. But Trump could be the best US president China could have in the next five presidencies,” he added.

Xia Bin, a former Chinese central bank official and now an adviser to the State Council, said China must push forward and speed up domestic reforms, including allowing 100 million migrant workers to settle down as permanent urban residents, amid the huge economic uncertainties created by the trade war.

Since the trade war truce, Beijing has sent signs of its intent to open up its domestic financial market, a key US requirement for a trade deal.

announced on Tuesday that China would eliminate the cap on foreign ownership in the domestic financial industry sectors from 2020, a year earlier than previously planned.

Li, speaking at the Annual Meeting of the New Champions of the World Economic Forum or Summer Davos as it is more commonly known, also promised that there would be no competitive devaluation of Chinese currency, and that the government would strive to create a more transparent and predictable business environment.

“We should promote the spirit of partnership, carry out equal consultations, seek common ground while … managing and controlling disputes,” he said in Dalian.

Any amount of running linked to significantly lower risk of early death.