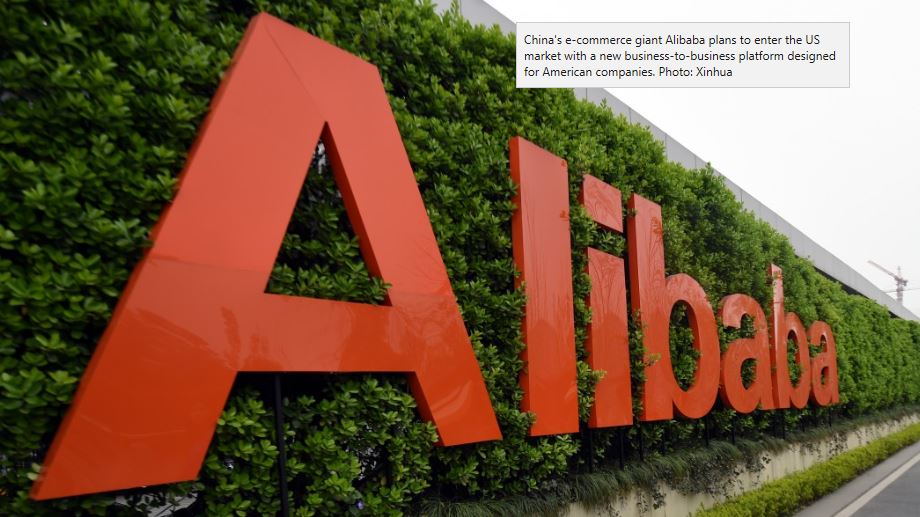 Alibaba to take on Amazon, opening business-to-business services to US companies

Alibaba Group opened its business-to-business (B2B) online marketplace to US companies on Tuesday, taking on its US rival Amazon.com as part of the Chinese e-commerce giant’s plan to grow its market share internationally.

In a further push to grow its business outside China, the Alibaba.com platform will let US manufacturers, distributors and wholesalers sell their products and services to other American and global businesses and wholesalers.

Alibaba’s American depositary shares (ADS) rose 1.4 per cent Tuesday morning to US$176.15 in New York following the announcement. Last week, the company’s shareholders overwhelmingly approved a 1-to-8 split of the ADS in preparation for its listings in Hong Kong.

The announcement on Tuesday came a year after US President Donald Trump began a trade war against China by instituting the first of several rounds of tariffs on Chinese exports. Tensions between the two countries have since risen, with confrontations expanding to other trade and economic issues, academic research and, particularly, technology.

As a result, the US government has tightened laws for Chinese investors to buy US assets and for US companies to export technology to China, fearing potential national security threats.

“In spite of the geopolitical tensions between China and the US, we continue to build our US business, carefully,” said Alibaba Group President Michael Evans in New York on Monday.

“I spent a lot of time in Washington to make sure they understand what we are trying to do in the US, including the launch today, because it involves some form of technology that we want them to be comfortable with,” said Evans.

Alibaba, which owns the South China Morning Post, started in 1999 as a B2B website connecting manufacturers and wholesalers in China.

The company has since grown to become the operator of the world’s largest e-commerce platform. The B2B unit is separate from its retail e-commerce platforms, including Tmall.com and Taobao.com, that sell goods directly to consumers.

Alibaba has been making a push for its retail e-commerce internationally as well, most recently launching an English-language website of Tmall Global to attract overseas consumers.

With this launch, Alibaba takes on Amazon.com, which has a similar B2B platform since 2015 – Amazon Business – that caters to similar clients in the US. To compete against Amazon, John Caplan, head of North America B2B at Alibaba Group, said that Alibaba.com would offer clients a flat membership fee of a couple of thousand dollars a year. Unlike Amazon, the Alibaba platform will not take a cut from the sales the client makes using it.

An Amazon spokesperson did not respond to an emailed request seeking comment. According to its website, a qualified wholesaler may sign up for a minimum of US$39.99 a month. But Amazon takes up to 15 per cent of a client’s sales generated from the platform, according to a person familiar with the matter.

Jack Ma, Alibaba’s founder and chairman, began a global expansion in 2015. The company has since made headway but its international e-commerce revenues have remained low, at 9 per cent of the company’s totals.

Alibaba, which already has more than 10 million active B2B businesses and 180,000 brands, sees its next growth driver in B2B – a market worth US$23.9 trillion, or six times the size of the online retail market, according to the US International Trade Commission.

But Caplan said that most of those trades are lopsided.

“In today’s B2B market, Chinese manufacturers make up about 95 per cent of total sellers to the rest of the world, but wholesalers in China buy very little from merchandisers outside the country,” said Caplan.

According to a survey by McKinsey & Company, small and medium businesses are also slow to go digital, with less than 10 per cent of such companies having a mobile sales strategy.

Alibaba’s first B2B deal was struck four months ago with the large US office supply seller Office Depot. The companies launched a co-branded e-commerce website that gives Chinese merchandisers the ability to sell to Office Depot’s 10 million customers and to tap into Office Depot’s logistics and distribution channels that allows next-day delivery in the US.

Office Depot has struggled to increase sales in recent years as it combats Amazon, the e-commerce giant. As a result, Office Depot has shifted its focus to B2B, which has grown to become its largest revenue source in 2018, according to a filing with the US Securities and Exchange Commission.

The company pulled back from international operations three years ago, selling off businesses in Australia, New Zealand and South Korea. In 2017, its mainland Chinese business was sold to Shanghai-based M&G COLIPU Office Suppliers.

Natalie Malaszenko, Office Depot’s senior vice president for its e-commerce business, said the relationship with Alibaba would help her company’s efforts in the US.

“We are going to focus on selling to the domestic customers in the US,” Malaszenko told the Post.

“Making money from blogging requires you to do only two things: drive a lot of traffic, then maximize the income from that traffic.” – John Chow – Subscribe with THE ONLINE PUBLISHERS to offer your services as a blogger.

If Facebook and Google don’t fix their problems, advertising execs say they could go somewhere else.

US inflation picks up in April as spending slows.

Australia’s Richest 2019: In A Down Year, Two Miners Break Back Into The Top 50.

Trump’s tax overhaul is taking a serious toll on the Hamptons real-estate market.

Why is the Brecon by-election so important to Boris?.

Millions In India Face Uncertain Future After Being Left Off Citizenship List.