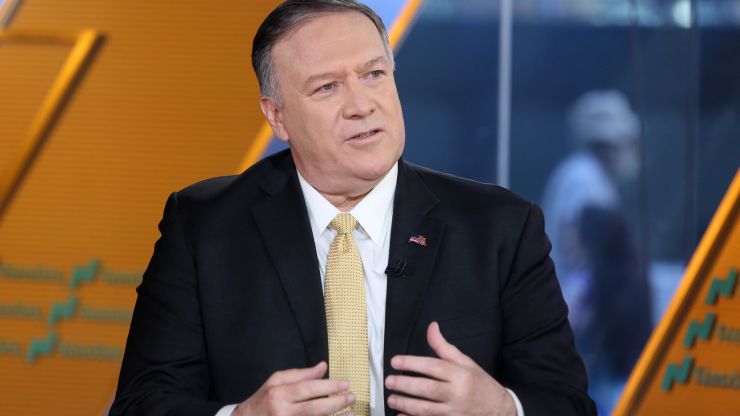 Secretary of State Mike Pompeo told a group of business executives and free-trade economists that he believes the trade war with China could come to an end by the 2020 presidential election, according to people who attended the gathering.

At a private lunch in New York on Tuesday, Pompeo spoke in front of a crowd of about 40 people that included economics writer Stephen Moore, Blackstone CEO Steve Schwarzman, Gristedes supermarket founder John Catsimatidis and former New York GOP chairman Ed Cox, according to people who attended the gathering.

Representatives from the State Department and Blackstone did not return a request for comment.

President Donald Trump has been levying tariffs on a variety of Chinese goods since the start of his administration, while China has been retaliating with trade barriers of its own.

Pompeo told CNBC’s “Squawk Box” earlier Tuesday that he wasn’t sure about where things will ultimately stand between the U.S. and China.

“I don’t know the answer to that. I have spoken to Secretary Mnuchin almost every day,” Pompeo told CNBC. “I haven’t been at the center of these actual negotiations. I’ve seen them make real progress.”

Moore said Pompeo, speaking at the lunch, sounded somewhat bullish on the prospects of an agreement.

“He still thinks that we can get a deal before the election. I think we would all agree that it would be better for the country,” Moore told CNBC in an interview.

Moore also noted that Pompeo still seemed hawkish on a China deal in the short term. Pompeo, according to Moore, pointed out that there continue to be hurdles to an immediate agreement.

“It’s been a tough slog to get China to agree to things. The hardliners are in command right now,” Moore said, reflecting on Pompeo’s remarks.

Catsmatidis also took away that Pompeo senses that China and the U.S. will come to an agreement over the next year.

“He talked about China. He thinks it will probably get done and they are not going to wait until 2020,” said the supermarket magnate.

The meeting was organized by the “Committee to Unleash Prosperity,” whose founders include Moore, former Reagan administration economist Art Laffer and former presidential candidate Steve Forbes. Catsimatidis is a member of the group.

“Don’t focus on having a great blog. Focus on producing a blog that’s great for your readers.” – Brian Clark – Subscribe with THE ONLINE PUBLISHERS TOP online bloggers to offer your services as a blogger.

Get Started With Earning For Posting On Social Media. To more click >>> Theinternationalcampaigner

4 Reasons All Photographers Need To Sign Up With TOP.

3 Reasons To Advertise With TOP as Soon As Possible.

2 Main Reasons To Think About Going With TOP Translation Platform