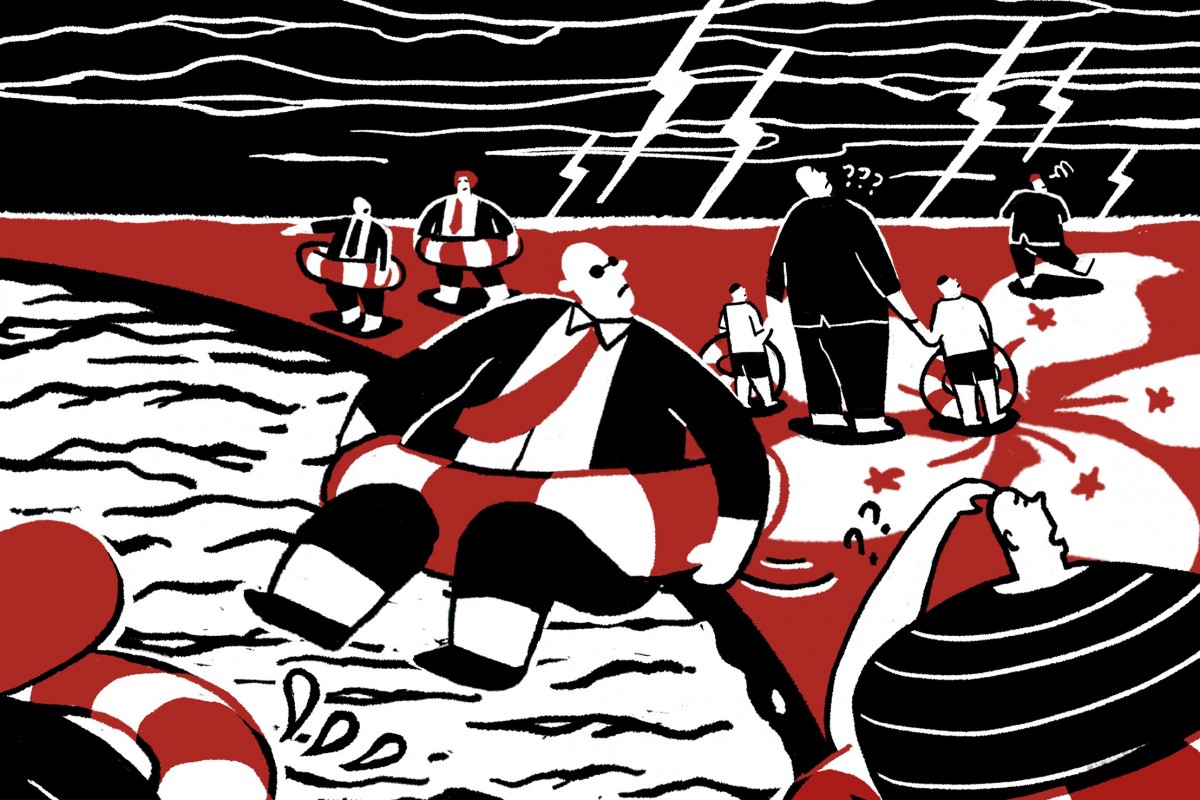 “What a shame for Hong Kong,” Liang, from Shanxi province in northern China, wrote in a social media post that night. “I never imagined that such a personal assault could have happened in a city that prides itself on upholding law and order.”

Liang, a Hong Kong permanent resident, said he fully supported the peaceful protests in the beginning but had since taken part in a mass rally and a crowd-funding campaign for advertisements in support of the police.

“I really value this space where we can make our voices heard – it’s something we can’t do on the mainland,” he said.

“But now, things have degenerated to the stage where the righteous police have to take the blame for worsening law and order, and radical protesters can go on a rampage, vandalising public property and attacking law enforcement with some noble excuse but without punishment.”

Liang, who works in the finance industry, is one of the tens of thousands of young professional mainland Chinese known as

gangpiao, or drifters, who have made Hong Kong home in the past decade, attracted by the city’s job opportunities, shared culture and social tolerance. But the summer of protests have left many disillusioned, turning their relationship with the city upside down and prompting many to wonder whether they have a future in Hong Kong. 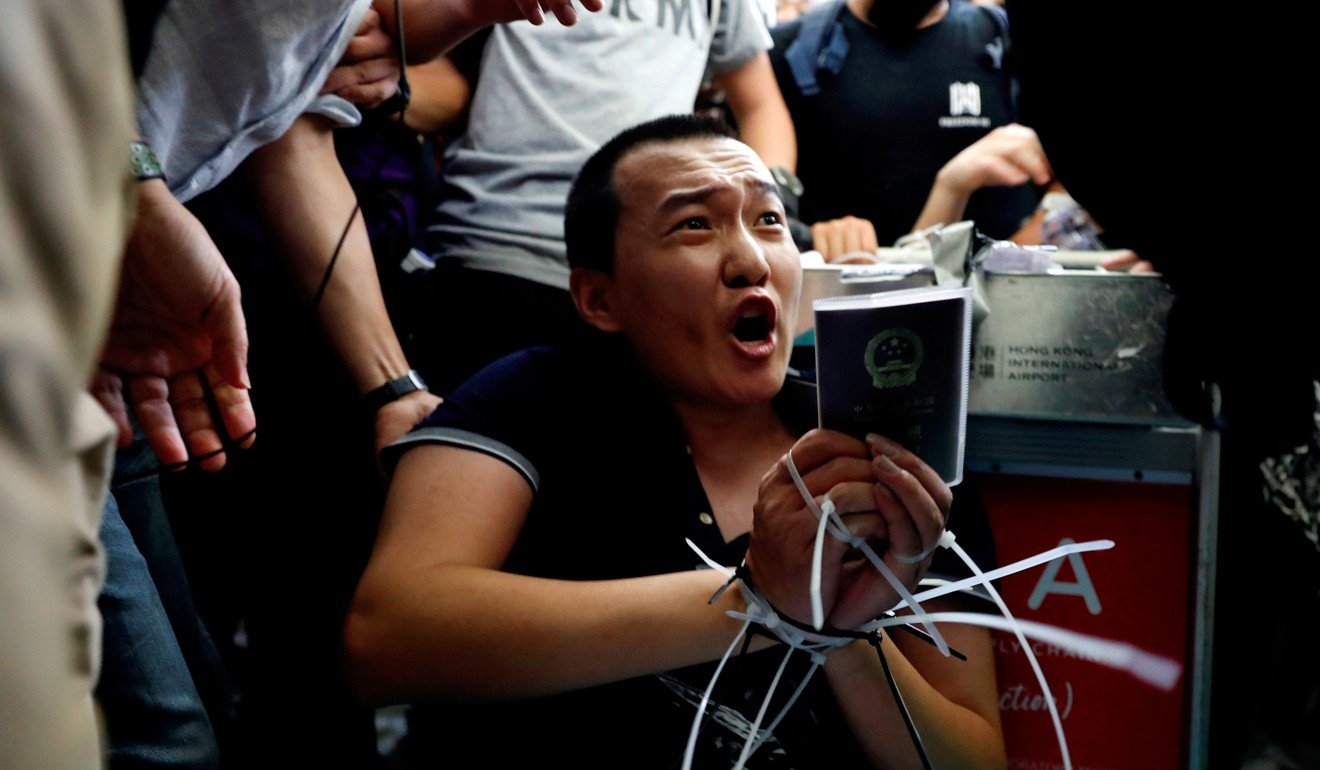 Fu Guohao, a reporter for the mainland’s Global Times website, is tied by protesters during a mass demonstration at Hong Kong International Airport on August 13. Photo: Reuters

There is no official data on the number of gangpiao but according to Hong Kong census data, there were about 77,000 Chinese nationals who had lived for less than seven years in the city by mid-2016. About 80 per cent of this group were aged between 18 and 30, and more than 60 per cent held a postgraduate qualification.

After seven years, Chinese citizens – like other nationals – can apply to become permanent Hong Kong residents but the census data does not indicate how many people have chosen this option.

Before the summer protests, most gangpiao happily called Hong Kong home but the events in July and August – including the

ransacking of the Legislative Council building on July 1

and the siege of the central government’s liaison office three weeks later – were turning points.

Zhu Jie, a specialist in Hong Kong affairs at Wuhan University, said many gangpiao became indignant because the behaviour of some protesters crossed the line of disrespecting their country.

For many, the storming of Legco was a shocking act of violence while the attack on the liaison office was a direct assault on Beijing’s sovereignty.

“Many of the gangpiao are educated in mainland China and patriotism is a key value that they shared,” Zhu said. “This is why so many gangpiao have joined activities to support the police.”

For Alicia Liu, a senior banker at a Chinese investment bank and a long-term Hong Kong resident, the attack on the liaison office caused her to rethink her identity.

“I used to think that I was a local in Hong Kong before the recent events. But now I consider myself more a mainlander,” Liu said.

As well as targeting Legco and the liaison office, some radical protesters have aimed abuse at mainland Chinese citizens. When some Hong Kong University students

painted derogatory slogans over the residence of HKU vice-chancellor

Comments posted online in July by a deputy principal targeting children of police officers also sent shivers down the spine of many gangpiao, especially those with families in the city. Some gangpiao parents went so far as to draw up a “white list” of preferred Hong Kong schools where administrators had taken a conservative position on the protests.

Lynn Lin, a human resources officer at one of China’s leading internet companies, said she was thinking twice about staying in Hong Kong.

“My child was born here but I don’t want her to grow up in a hostile and divided society,” Lin said.

“I would now prefer to send my child to Beijing, my hometown, where she can study in an international school and can get a broader picture about China.”

Alicia Liu, the banker, said she valued the job opportunities in Hong Kong but the violent protests prompted her to think about leaving.

“Apart from the unlawful detention of the two mainlanders at the airport, what’s most appalling to me is that it seems that Hong Kong society supports such unlawful action,” Liu said.

Geng Chunya, president of the Hong Kong Association of Mainland Graduates and a permanent resident since 2001, is not about to leave but he has felt the hostility first hand.

“My 70-year-old father and I returned to Hong Kong after a day trip to Shenzhen in early July. Almost as soon as my father sat down in the MTR and began to speak in Mandarin, the man next to him shouted obscenities and told my father to get out of Hong Kong,” Geng said.

The serious disruption of public transport caused by some protests has further fuelled anger among gangpiao who commute between Hong Kong and the mainland.

“Such actions have crossed the line of freedom of expression,” said Jennie Liang, who works for an asset management company in Central and travels daily from her home in Shenzhen. “They are just selfish and egotistical.”

For other mainlanders in the city, the larger concern is Hong Kong’s long-term role in the region.

The political unrest of the past two months hasn’t put him off because “freedom of expression within the boundaries of the law is part of Hong Kong’s society, something that is taken for granted”. His big worry is the prospect of Hong Kong having a diminished role in the Greater Bay Area as a result of the turmoil.

“Hong Kong was supposed to play a leading role in the Greater Bay Area, where its legal framework, financial system and services were supposed to be the role model for the rest … to aspire to,” Lin said.

“It was supposed to play a key role in aviation, logistics, finance and innovation. If Hong Kong’s roles were to be diminished, the question for recent arrivals like me would be: why do we bother to put up with the higher costs in this city? We might as well stay in Shenzhen, or move to Guangzhou, where we are closer to the action, and where the cost of living, operations and everything else is cheaper anyway.”

There are signs that Hong Kong has already lost some appeal to mainland migrants. Last year, the

Henry Ho, chairman of the One Country Two Systems Youth Forum, a Hong Kong think tank, said that gangpiao, who knew both mainland China and Hong Kong, were an important source of talent for the city, especially as it grappled with challenges such as an ageing population.

“The departure of these people will be a loss for Hong Kong, especially if the trend accelerates as the protests continue and Hong Kong has an acute demand of talent not just from mainland China but from other countries as well,” Ho said. 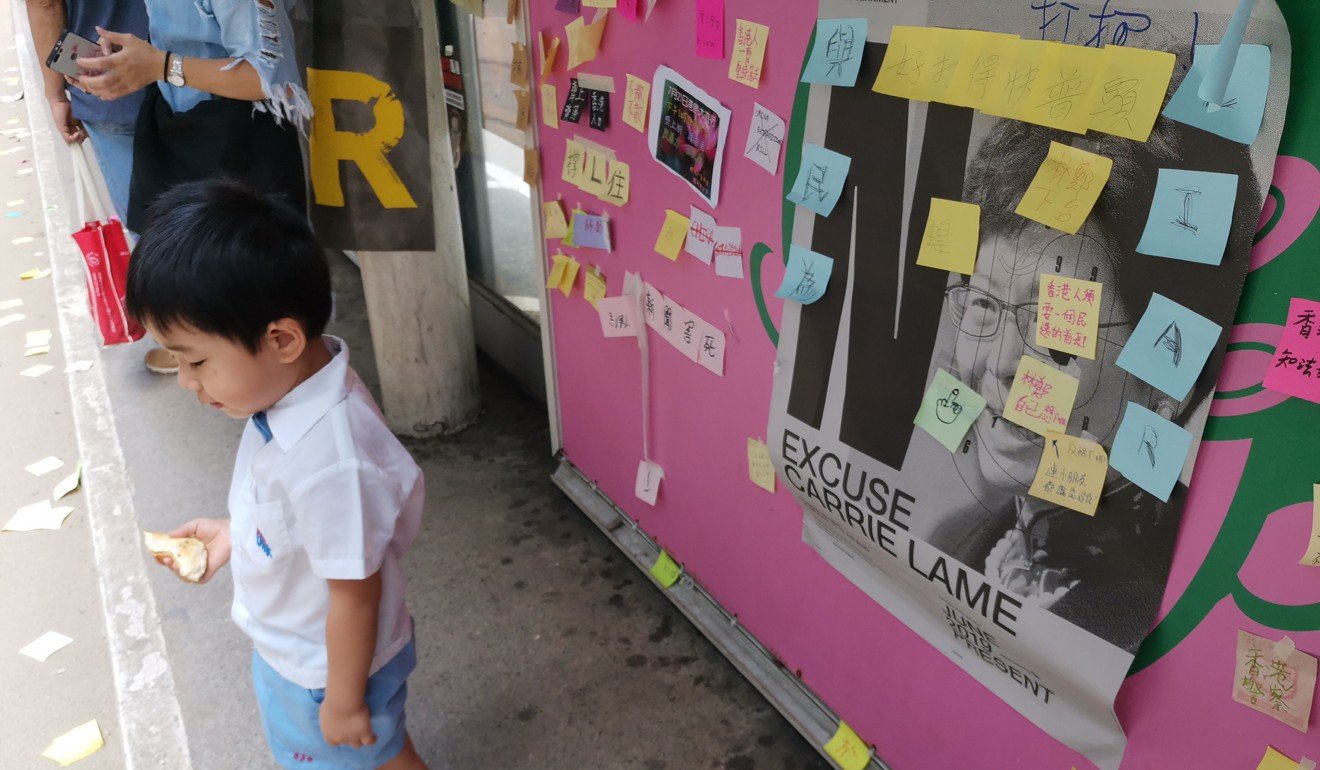 The protests have left many gangpiao wondering whether they still can call Hong Kong home. Photo: Kristin Huang

Alexa Chow Yee-ping, managing director of AMAC Human Resources Consultants, agreed that Hong Kong’s economy would suffer if there was an exodus of mainland professionals.

“Hong Kong has an ageing population and we are already at risk of a shortage of manpower, as the population from the post-war baby boom reaches retirement age. Mainland workers have actually provided an important source of human capital for Hong Kong,” Chow said.

“If China-funded businesses find it difficult to hire in Hong Kong, they would move the headcount to the mainland and hire there instead, and this means ultimately their presence in the city could shrink.”

Emily Wang, a Hong Kong University graduate working as an intellectual property lawyer in the manufacturing industry, said she could easily find a higher-paying job than the one she had in Hong Kong. “My husband is now discussing with his company to open a new office in Singapore,” she said.

But food safety – particularly for her children – was one of the reasons why she had chosen to stay.

Meanwhile, others are looking to north for options.

Jennie Liang said reports of Beijing granting greater authority to Shenzhen for reforms could open the door for her.

“Beijing’s plan to make Shenzhen a test-bed city for China and the world will be an important factor for me as to stay or leave Hong Kong,” she said.

Geng, however, said he remained confident, despite the city’s struggles.

“I love Hong Kong deeply. I believe Hong Kong is an important model for all cities on mainland China that they need to improve the rule of law. Hong Kong is a good example of a place where Western values can mix with Eastern traditions. I am confident that Hong Kong’s overall prospects will not be bad.”

“Fake news is cheap to produce. Genuine journalism is expensive.” – Toomas Hendrik Ilves –  Subscribe with THE ONLINE PUBLISHERS TOP online journalists to offer your services as a journalist.

Finding Someone To Handle Press Release.