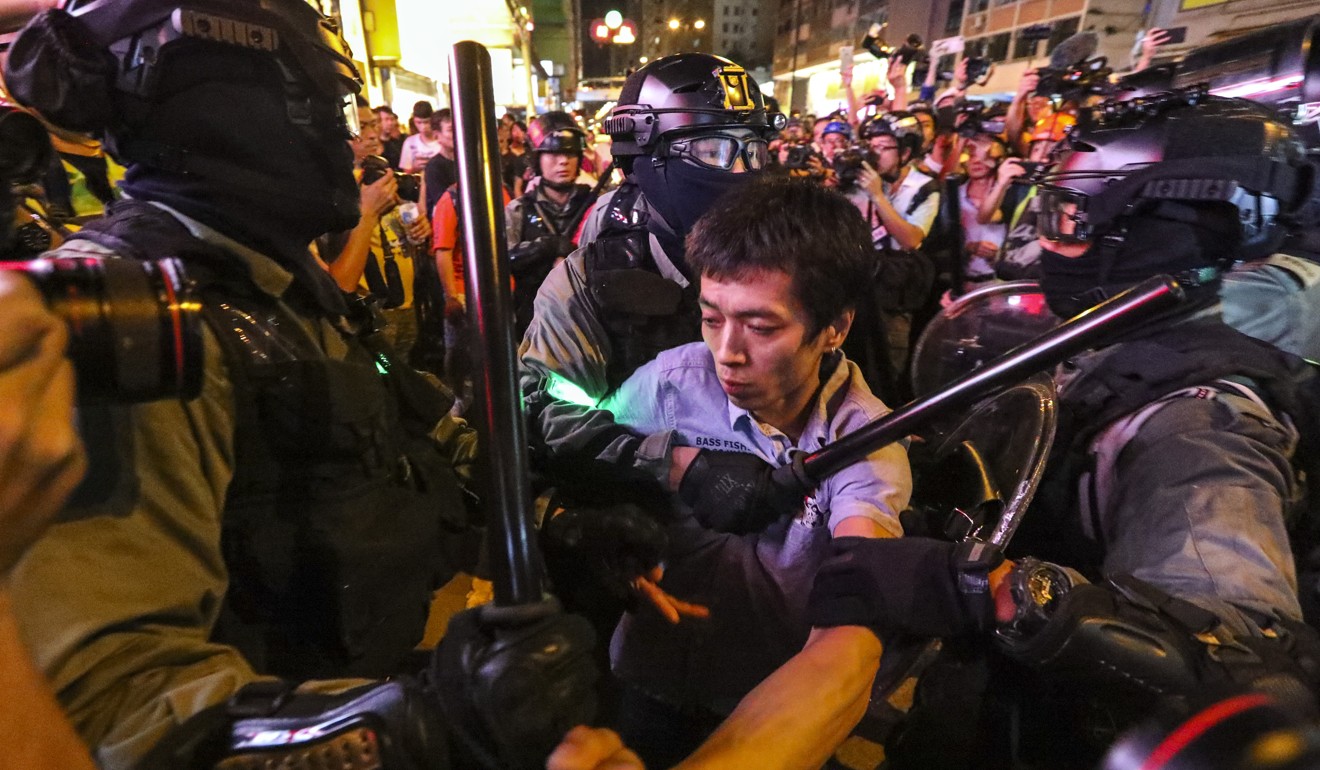 A 49-year-old man was seriously injured after being attacked by anti-government protesters in Wan Chai, as street fights between opposing groups erupted in various parts of Hong Kong on Sunday.

People traded blows and verbal abuse, with outbreaks of violence occurring throughout the evening mainly in the neighbourhood of North Point and Fortress Hill, where several injuries were reported.

Earlier on Sunday, there were waves of violent clashes between police and protesters on Hong Kong streets.

The ugliest incident, recorded on a video that went viral online, showed an unarmed man dressed in a blue shirt and trousers being attacked by a mob of black-clad masked protesters.

It was said to have occurred at about 4.30pm on Gloucester Road, near the junction of Marsh Road in Wan Chai. The man was reported to have confronted the protesters before he was attacked.

In the video, at least six protesters can be seen kicking him in the chest and back, punching his back and hitting him with umbrellas.

The man is seen shouting out and kneeling down, as if in surrender, covering his head with his hands. But his attackers continue raining blows on him, cheered on by others who clap their hands.

At one point, the man appeared to lose consciousness and was seen lying on the ground. A bag he had been holding was taken away. Separate television news footage showed him bleeding from the mouth. 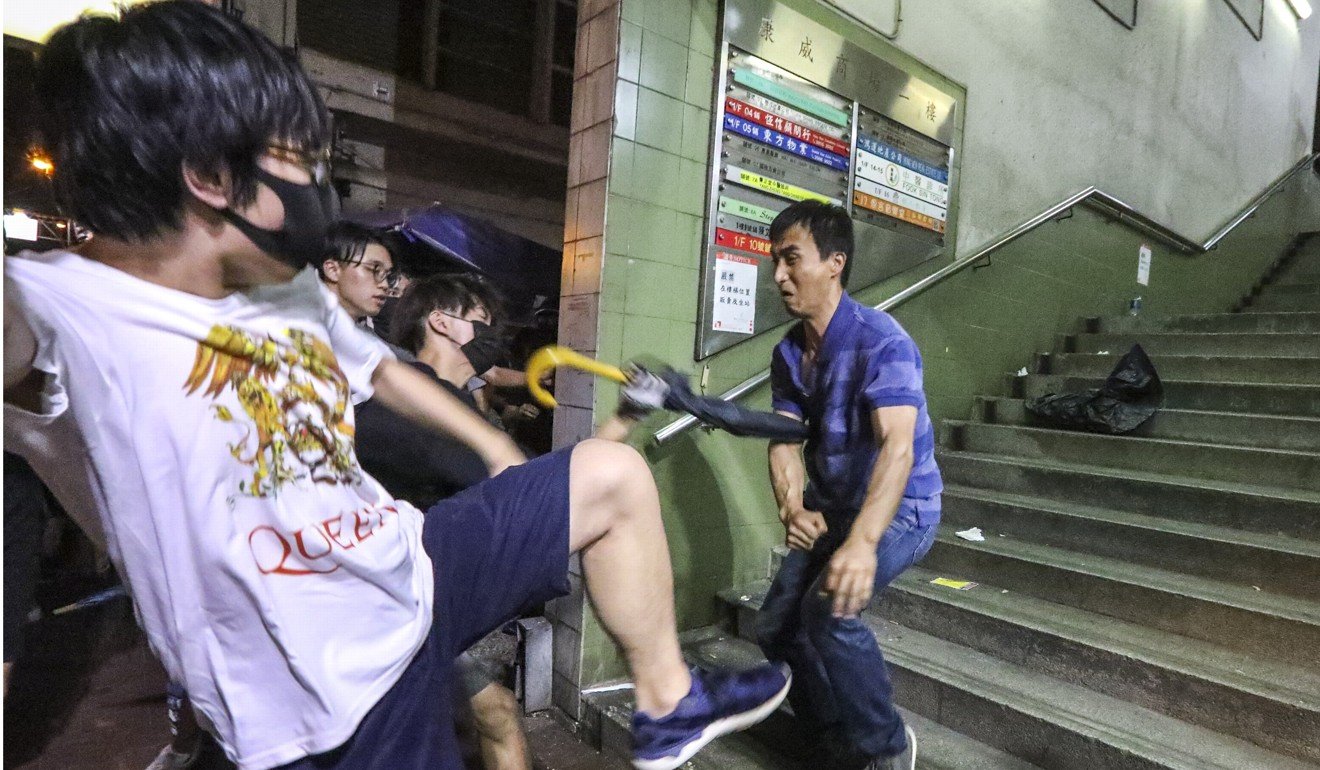 There were a number of brawls in North Point on Sunday evening. Photo: Felix Wong

The Hospital Authority later reported that a 49-year-old man was sent to Ruttonjee Hospital for treatment. Police sources confirmed that he was the victim on Gloucester Road. He was said to be in a serious condition.

There were more scenes of violence on Sunday night.

A group of middle-aged men, some in white shirts, were seen holding a folding stool and a sledgehammer both outside and inside Fortress Hill MTR station. Some chanted, “Fujian people, beat the cockroaches! Go police!”, using a derogatory term for protesters. In one incident, a group was seen punching a black-clad man, who was crouching and protecting his head, inside the MTR station. One man was also seen hitting the head of a protester from behind. 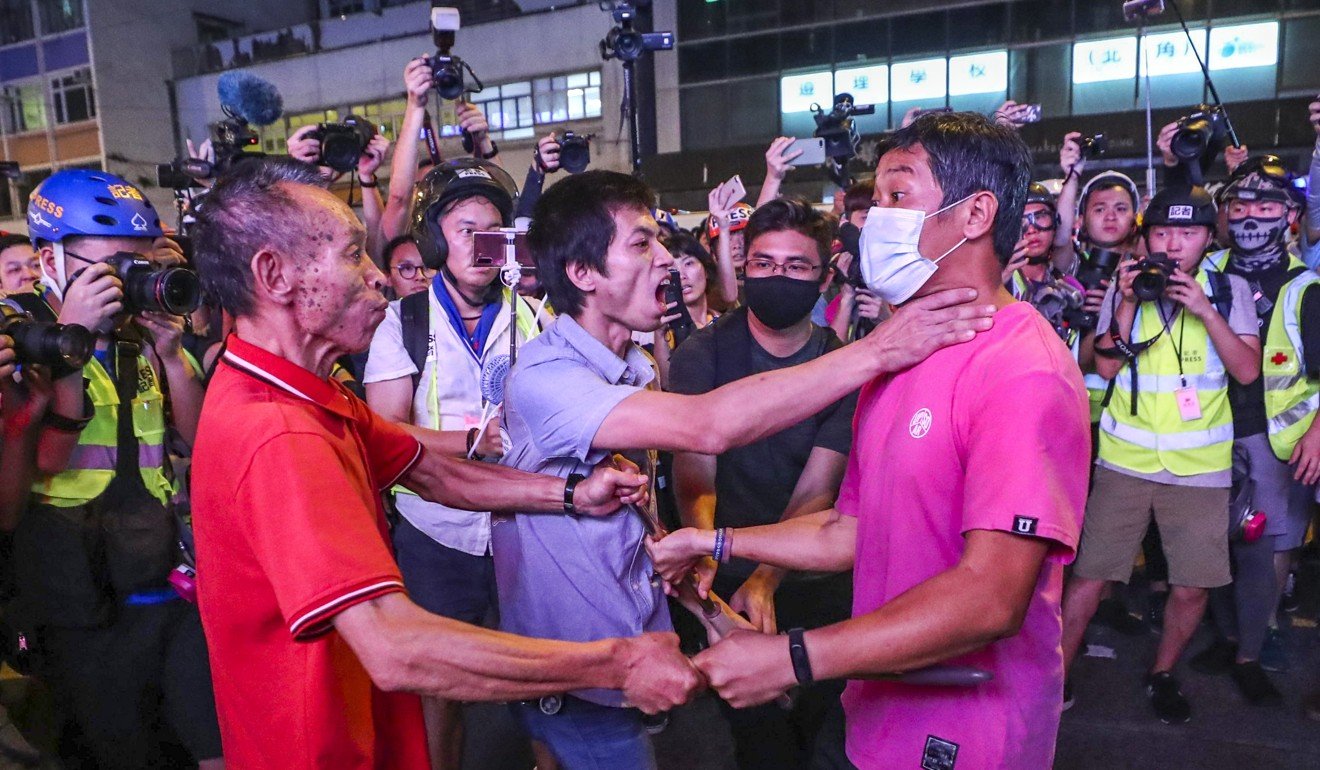 People in North Point face-off in a night of nasty scuffles and brawls. Photo: Sam Tsang

Near North Point MTR station, a man wearing white was seen lying on the ground with his head bleeding. On the pavement near him sat another man dressed in white, bleeding from the mouth. When approached by reporters, he said he did not understand Cantonese.

A number of journalists, including a Post video producer, also became targets while covering the violence in North Point. One Post photographer was also punched in the face.

At around 8.20pm, near the junction of North Point Road and Chun Yeung Street, a group of unmasked men confronted journalists and abused them. Some in the group were wearing white T-shirts, and one tried to push the journalists away.

Riot police stepped in separate them from the journalists. A male journalist shouted at a police officer, demanding they arrest a man who he claimed had attacked a member of the press.

Also in North Point, three men were seen on the street with butcher’s knives and they then kicked over two cans of what witnesses said smelled like flammable liquid. Police arrived within minutes but the men had locked themselves in the office of a group called the Hong Kong First Youth Association on Ming Yuen Western Street. Police eventually took seven people away from the building.

In August, some people had also been seen darting into the office after they fought with protesters using poles.

With Hong Kong into its fourth month of anti-government protests, there has been

more violence on the streets in recent days

On Saturday, pro-Beijing groups gathered to sing the Chinese anthem and wave national flags at a rally in Amoy Plaza shopping centre in Kowloon Bay, after cleaning up a so-called “Lennon Wall” of stickers put up earlier by protesters.

Black-clad protesters confronted the pro-government individuals and, as tempers rose, arguments and fights broke out.

Online lobbying is a new realm offered exclusively by The Online Publishers ‘TOP‘.

Ways For Social Media Influencers To Make Some Money.

The Best Way To Monetize Your Website And Start Making Money.