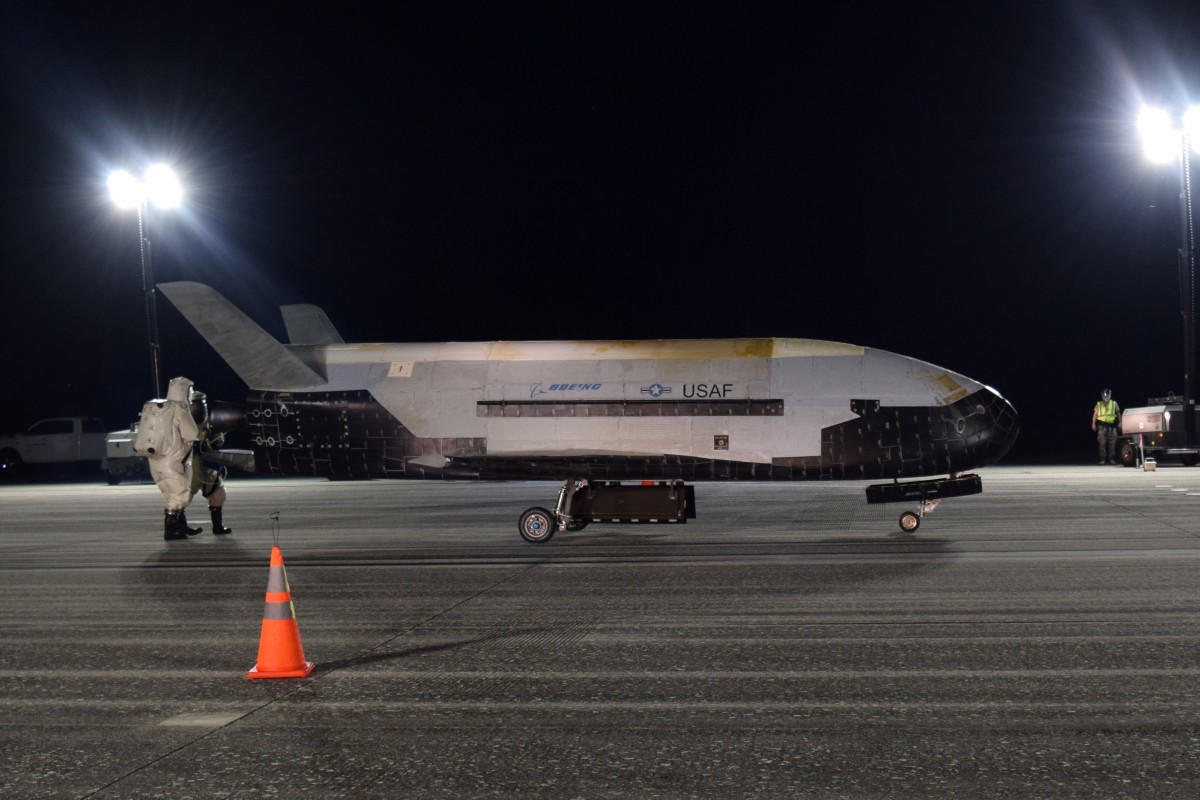 The world’s only reusable space vehicle, the Boeing X-37B, returned to Nasa’s Kennedy Space Centre in Cape Canaveral, Florida on Sunday after 780 days in orbit. According to the US Air Force, its mission objectives were completed successfully, including “providing a ride for small satellites”.

It was the unmanned space plane’s fifth and longest mission, raising the programme’s total number of days spent in orbit to 2,865. The air force is preparing to launch the sixth X-37B mission next year.

Compared to the space shuttle, the orbital test vehicle is smaller but flies for much longer, and appears to be dedicated mainly to military tasks.

Heather Wilson, former secretary of the US Air Force, said the X-37B’s strength was that it circles the Earth in “an orbit that looks like an egg”, and can manoeuvre when it moves close to the Earth’s atmosphere to change its orbit.

“Which means our adversaries don’t know – and that happens on the far side of the Earth from our adversaries – where it’s going to come up next,” Wilson said at the Aspen Security Forum in July. “And we know that drives them nuts. And I’m really glad about that.”

Hong Kong-based military commentator Song Zhongping said the X-37B’s ability to quickly alter position meant it could spy on other satellites or targets on Earth, as well as launch attacks.

“If the X-37B can be loaded with small satellites, it can also be loaded with weapons. It may also be able to be fitted with robotic arms to capture other satellites that are in orbit,” Song said.

When the X-37B was launched in 2017, China Space News called it a “satellite killer” because it could “take down orbiting satellites of any adversary at any time.” Concern was also raised that its deployment of satellites might have breached existing the space arms control code.

Jonathan McDowell, an astronomer at the Harvard-Smithsonian Centre for Astrophysics, wrote on Twitter on Sunday that the deployment of satellites was “alarming” because the US did not report them as required under the UN Registration Convention.

This could be the first time, he said, that “either the USA or Russia has blatantly flouted the convention”.

Introduced by the UN in 1974, the convention is based on the 1967 Outer Space Treaty which requires that all objects launched into space must be registered “to the greatest extent feasible and practicable”. Regarded as the basic international law of space, the treaty emphasises the peaceful use of space, forbidding the deployment of mass destructive weapons in space.

But a “disastrous” arms race in space may be inevitable, Song said, as countries like Russia and China – largely viewed as adversaries by Washington – developed similar assault aerospace vessels, or armed their satellites and space stations with defensive weapons as counter measures.

Only last week China successfully completed a wind tunnel experiment to separate a two-stage aerocraft, an important step forward in its plan to build an aerospace plane, although production o fan actual spacecraft may still be years away.

Russia, which during the Soviet era also had space shuttles, has also reportedly been working towards building its own reusable unmanned space plane.

3 Reasons You Need To Make TOP Your Digital Marketing Hub.

4 Benefits To Joining with TOP For Online Reputation Management Service.

Where to Find The Best Quality Translation Services.

4 Great Benefits To Advertising With TOP.