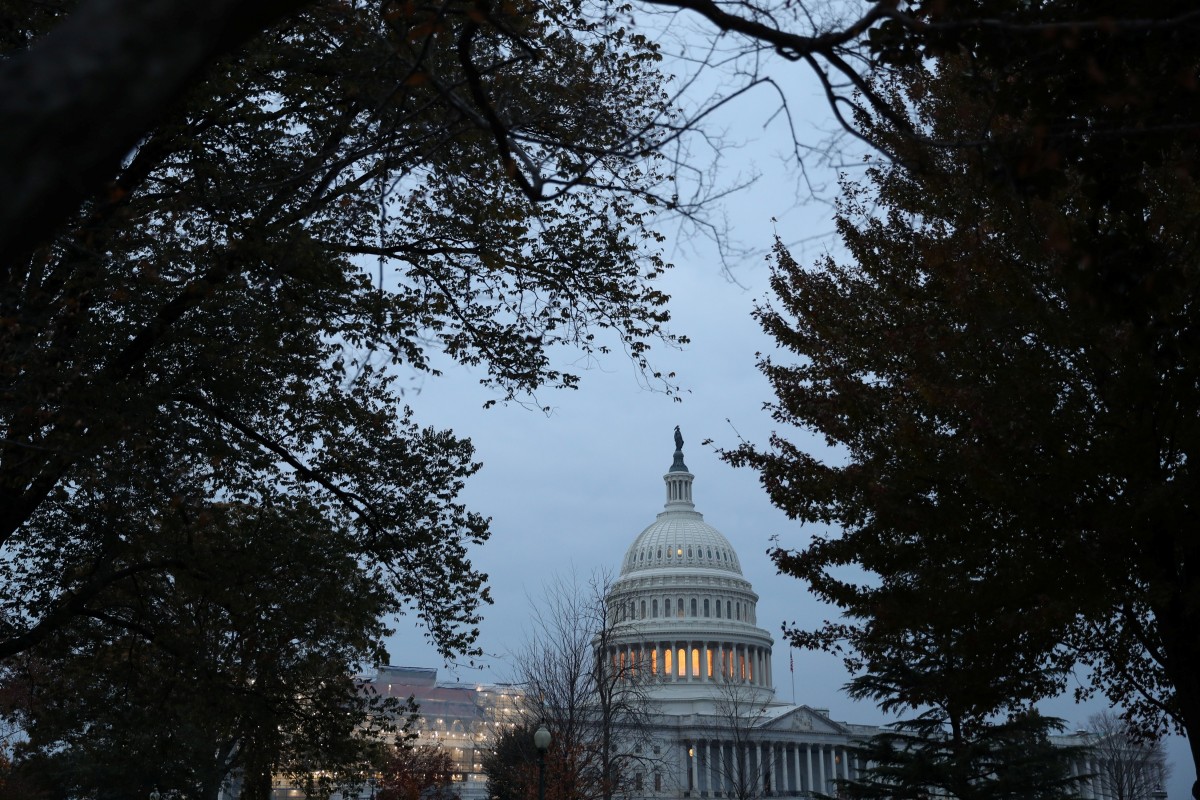 The speed with which the US Senate passed a bill that would allow Washington to suspend Hong Kong’s special status reflects growing concern about the situation in the city – something that business leaders have described as a greater source of worry than its contents.

The Hong Kong Human Rights and Democracy Act breezed through the Senate on Tuesday night, with many members racing to co-sponsor the bill at the last minute.

Former officials described the legislation as “symbolic” and pointed out that many of its powers – including the suspension of the city’s preferential economic status and the ability to sanction officials – already exist in US law.

However, its rapid passage and the bipartisan support it enjoys are seen as a sign of how high feelings are running in Washington.

“The speed with which the bill has moved reflects a growing concern about the direction of where Hong Kong is going,” said Kenneth Jarrett, former deputy US consul-general in Hong Kong and previously chairman of the US Chamber of Commerce in Shanghai.

“So for companies, that’s probably the bigger focus: that the likelihood for compromise is even smaller or that there will be more violence moving forward.”

After a series of clashes in the city over the past week, more than a dozen senators joined the bill’s supporters, which allowed it to pass without objection and marked rare moment of bipartisan unity in an increasingly polarised Washington.

A companion bill had already passed the House of Representatives in October.

Some discrepancies between the two versions will mean they need to be reconciled by a congressional committee before the legislation can be sent to US President Donald Trump, who must agree to sign it into law.

If enacted, the legislation – an amendment to the Hong Kong Policy Act of 1992 – would require the US Secretary of State to certify annually that Hong Kong continues to enjoy sufficient autonomy to warrant special treatment by Washington on economic and trade matters.

The legislation also directs the administration to identify and sanction – by denying entry to America and freezing US-held assets – individuals deemed responsible for the erosion of freedoms in the city.

Protesters in Hong Kong have rallied behind the legislative effort, staging Stars and Stripes-waving demonstrations to call for American lawmakers to expedite its passage.

Beijing, meanwhile, has decried the move as an example of US interference in China’s internal affairs and threatened to retaliate.

Yet despite its broad support in Washington and the spirited reactions it has elicited across the Pacific, the bill is not substantively different to existing powers at the US administration’s disposal.

Consular officials in Hong Kong already issue an annual assessment of the status of Hong Kong’s autonomy – as required by the Hong Kong Policy Act of 1992 – which could trigger the suspension of the city’s privileged status.

And even though the mechanism for sanctioning individuals does go further than the 1992 act, other pieces of legislation give the US government similar powers. For example, the Global Magnitsky Act allows Washington to target individuals over human rights violations.

“It’s a good environment to bash [China], and maybe it makes people feel like they’re doing something. Something for democracy.”

Despite its largely symbolic ramifications, the business community in Hong Kong remains apprehensive about the implications for its status as a global business centre.

The American Chamber of Commerce in Hong Kong warned of the “possible unintended, counterproductive consequences of the bill, including on American business and its ability to continue exercising a strong positive influence in support of Hong Kong’s traditional core values”.

It highlighted the sections addressing export controls and sanctions as particular areas of concern.

Some analysts also argued that even if there were no new powers contained in the bill, they would now be fresh in the minds of members of Congress.

They also warned that growing bipartisan disaffection with China’s trade and economic practices, coupled with the upcoming election cycle, now made these measures more likely to be activated.

“I don’t think we are at that stage, but the very idea that there could be US sanctions imposed on Hong Kong would have a major impact on the city.

“It would bring some serious challenges to financial services in Hong Kong,” said Julien Chaisse, a law professor at City University of Hong Kong.

Hong Kong’s Secretary for Commerce and Economic Development Edward Yau Tang-wah criticised the “unwarranted and unnecessary” bill and warned it was “adding fuel to the fire”. 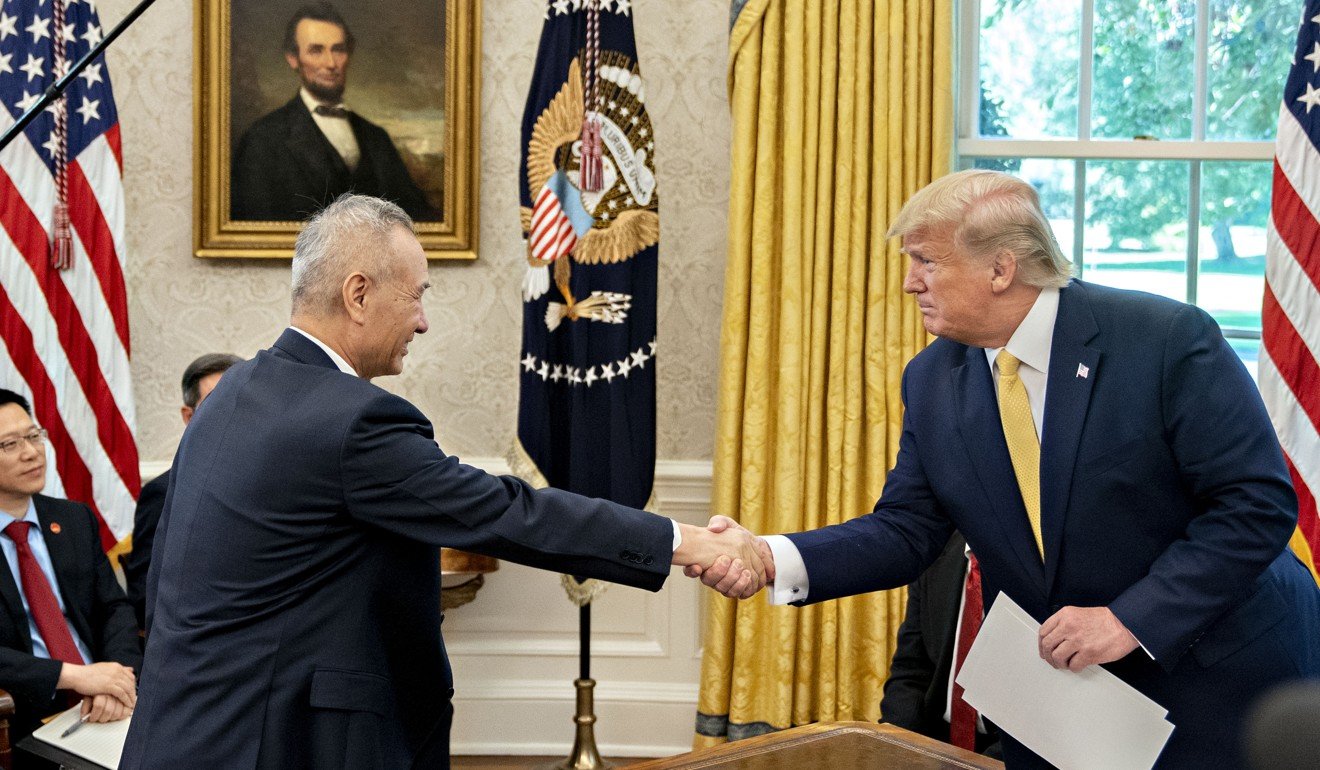 US President Donald Trump, pictured with China’s top trade negotiator Liu He, had asked his Senate allies to stall the legislation as negotiations continued. Photo: Bloomberg

“The passage of such legislation stands a chance of sending a wrong signal about the situation in Hong Kong,” Yau said.

The bill also comes amid the ongoing trade talks between Washington and Beijing and, even if the two sides are able to reach an interim “phase one” agreement, many observers expect that their long-term rivalry will continue to escalate.

For some, Hong Kong is ground zero in this stand-off. “The timing of this is unfortunate from Hong Kong’s point of view. We are not in a trade war – we are in the midst of a cold war, and Hong Kong is the new Berlin. We find ourselves right in the middle,” said Steve Vickers, a former head of the Royal Hong Kong Police Criminal Intelligence Bureau, who now runs a political and corporate risk consultancy.

It remains to be seen whether the Hong Kong Act will affect trade talks, with Trump having remained largely silent about the city’s situation since sending a number of tweets earlier in the crisis.

“Trump won’t have a natural empathy for these types of human rights or civil liberties issues. His focus is on the trade negotiations. He sees everything through that light,” Jarrett said.

A former Trump White House official, who wished to remain anonymous, said that the White House has been divided over the Hong Kong bill, with the office of Vice-President Mike Pence along with other “nationalistic figures” in the administration pushing for its progression.

Trump, on the other hand, had previously lobbied his allies in the US Senate to stall the passage of the bill.

“He would get crucified if he did that,” they said.

Instead, Trump is more likely to sign the bill in private, away from the cameras, since a public signing ceremony “is not a good look given this moment in time” when he is trying to reach a trade deal.

Close scrutiny of Trump’s handling of the bill will not just be limited to within the Washington beltway, however.

Supporters of the protests in Hong Kong have urged lawmakers on both sides of the divide in Washington to pressure Trump to ensure the bill passes into law.

“The resistance in Hong Kong has been very important. Protesters have used their blood, sweat, futures or even their lives to bring about the passing of this bill,” said Zoey Leung Siu-yuk, external vice-president of the student union at Hong Kong’s Baptist University.

“In light of the rapid development in the [Hong Kong] protests, I urge the two chambers to work out their differences and the president to approve it as soon as possible,” said Davin Wong, former president of Hong Kong University’s student union.

But the 21-year-old also expressed concern that the Hong Kong issue could get swept up into the trade dispute between China and the US.

“I hope senators and representatives can keep an eye on the president to make sure the freedom and dignity of Hongkongers will not be traded away,” he said.

TOP Gives A Space To Make Money Online From Home

4 Benefits To Joining with TOP For Online Reputation Management Service.

3 Steps To Make Money Online With Writing For TOP.

One Main Reason To Go With TOP For Your Translation Platform.