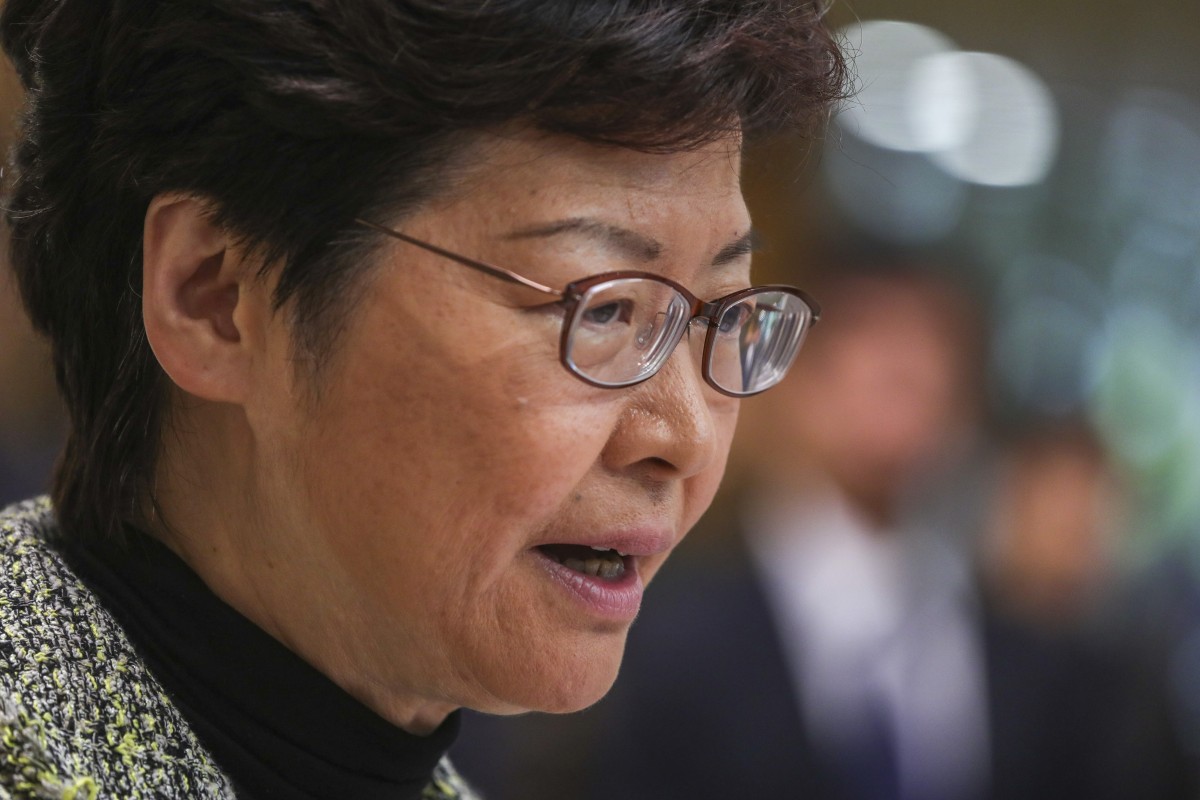 Chinese President Xi Jinping praised the courage and commitment of Hong Kong’s embattled leader on Monday, and reiterated the central government’s support for the city’s police force, as he met Carrie Lam Cheng Yuet-ngor for the second time in two months.

But Xi also made a point of repeating remarks he made in Brazil last month reinforcing Beijing’s “unswerving determination” to protect national sovereignty in Hong Kong.

The president’s comments came hours after Premier Li Keqiang told the chief executive to address deep-rooted problems in society and end violence and chaos, which had harmed society and damaged the economy.

Meeting Lam for the first time since November 4, Xi said Hong Kong’s situation this year has been the most critical and complicated since it was returned from British rule in 1997.

“Facing difficulties and pressure, Chief Executive Lam has stood firm on the ‘one country, two systems’ principle, governed in accordance with the law, and remained dedicated. You did plenty of work in difficult situations,” Xi told the city’s leader.

He said he firmly supported the city’s police force to firmly enforce the law, and urged different sectors to work together.

“I hope that different sectors in society can be united, work together to push forward Hong Kong’s development, and get it back on track,” the president said.

Xi also recapped remarks he made at the BRICS meeting in Brazil last month, where he said Beijing had “unswerving determination” to protect national sovereignty, security and development interests, to implement the guiding principle of one country, two systems and to oppose any external force in interfering in Hong Kong’s affairs.

In response, Lam expressed gratitude to Xi for his “care and guidance” on the city’s situation over the past six months, as well as for his “trust and support” in her and her team in handling the crisis.

In Shanghai last month, Xi lent his full support to Lam, quashing speculation she would be replaced, even as he signalled that her government must quell the social unrest that has now roiled the city for more than six months.

The president also took a measured approach in giving his assessment of the political crisis, analysts said. While he demanded “unswerving efforts to stop and punish violent activities” in accordance with the law, the president also called for more dialogue with different sectors of society.

Earlier on Monday, Li told Lam she had “risen to the challenges” during months of unrest that had struck a “serious blow” to the economy.

The session, at the Hong Kong room of the Great Hall of the People in Beijing, came on the third day of Lam’s annual duty visit to the capital.

“The central government fully acknowledges the efforts made by you and the city’s government,” Li said.

“Hong Kong has yet to come out from the difficulties. The city’s government must continue to make efforts in stopping violence and ending chaos in accordance with the law, and restore order.

“It must also study with urgency the deep-rooted conflicts and problems in Hong Kong’s socio-economic development, and safeguard the city’s long-term prosperity and stability.”

But Li also lamented the harm the protests had done to society as a whole.

“Obvious recession has emerged in Hong Kong’s economy, and many sectors were dealt a serious blow. We can say that the city is facing unprecedented, serious and complicated situations,” the premier added.

He told Lam: “You have been leading the government in doing the utmost to safeguard social stability, and rolled out a series of measures to help businesses and stabilise employment. It can be said that you rose to the challenges.”

Vice-Premier Han Zheng and Wang Zhimin, director of Beijing’s liaison office in Hong Kong, and Zhang Xiaoming, director of the State Council’s Hong Kong and Macau Affairs Office were also present at the meeting, which had a picture of Hong Kong at night as the visual backdrop. 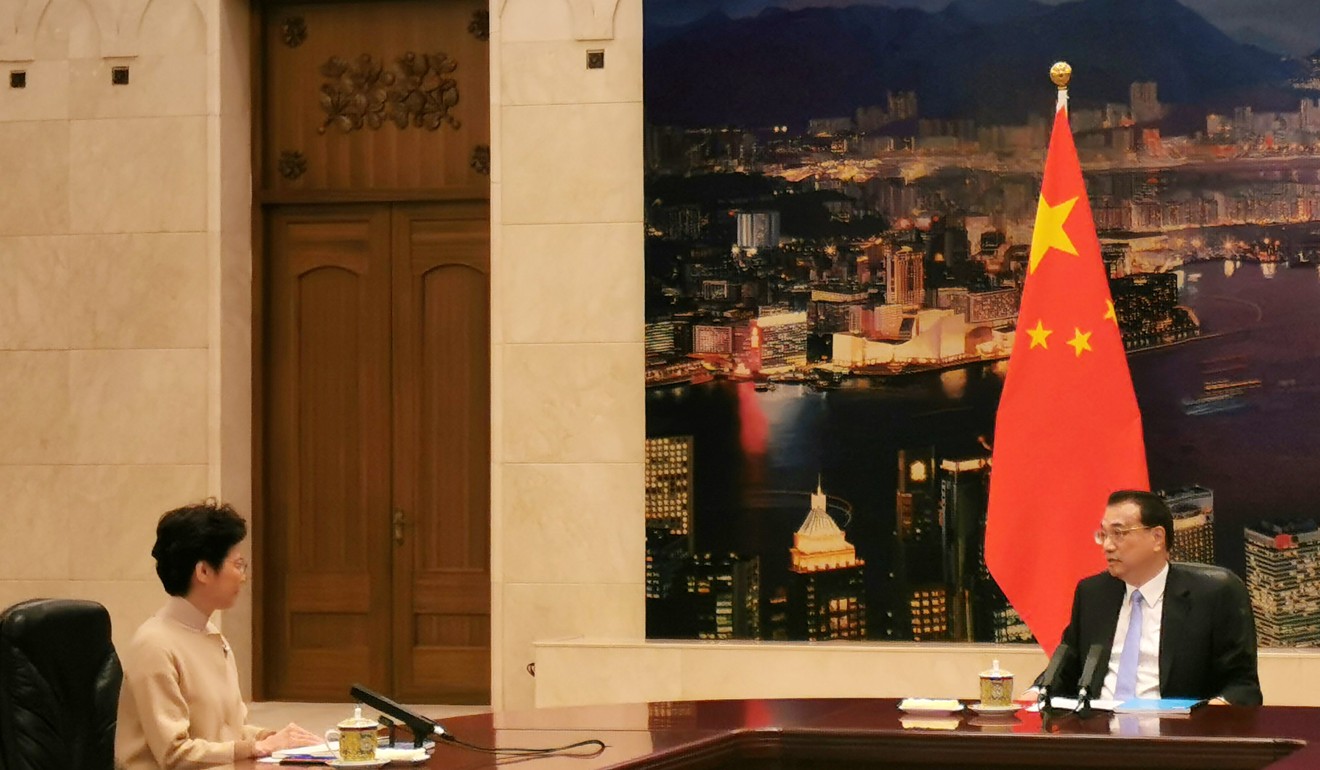 In response to Li, Lam admitted Hong Kong had faced a very grim situation on the political, economic and social front over the past year.

The city has recorded a significant economic downturn over the first six months, she said, but attributed it to external factors, such as the ongoing US-China trade war.

“There would be a more significant downturn in the third quarter because of the internal social unrest,” Lam added.

The pro-establishment camp lost heavily, losing control of 17 out of 18 district councils. The pro-democracy bloc netted 392 out of 452 seats, a record victory.

“Hong Kong police show no hesitation in cracking down on anti-government protests, and there is no sign Carrie Lam will resign to shoulder responsibility for her handling of the controversy over the extradition bill,” Lau said.

Hongkongers in mainland China say safety and friendships are on the line
More than 6,000 people have been arrested in connection with the protests, which were triggered by the now-withdrawn extradition bill and have evolved into a wider, increasingly violent, anti-government campaign.

Coupled with the US-China trade war, the unrest has pushed the city into a recession.

The economy shrank 3.2 per centin the third quarter, from the previous one, while GDP was down 2.9 per cent in the third quarter year on year, the biggest contraction in a decade.
After the pro-Beijing camp suffered a humiliating defeat at the district council elections last month, protests have been largely peaceful. However, police foiled two bomb plots in less than a week this month, and on Sunday used tear gas against a crowd in Mong Kok and pepper spray in Sha Tin to drive away radicals vandalising restaurants.

In September, Li said Beijing would safeguard its “one country, two systems” governing principle on Hong Kong, and support the local government’s efforts to end the crisis engulfing the city, as German Chancellor Angela Merkel visited China and called for the “utmost” effort to avoid violence.

On Monday evening, Lam is expected to hold a media briefing after meeting Xi. She will return to Hong Kong on Tuesday morning.

The chief executive also met the vice-premier and Zhang over dinner on Saturday.

A year ago, Li praised Lam for her leadership of the city, highlighting her promotion of innovation and efforts to tackle livelihood issues.

why scrutinize when projects seldom fold up and in a system where restructuring means lending more money to evergreen the loans?