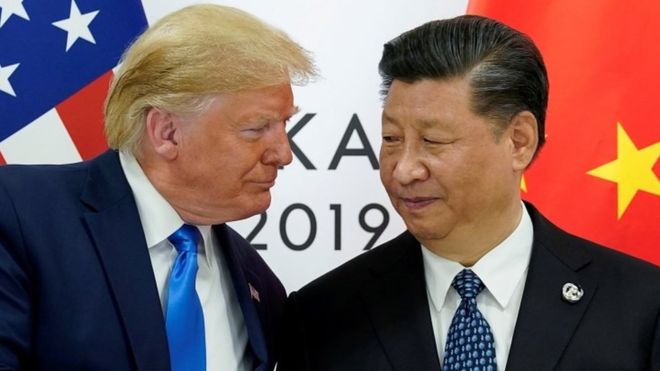 President Donald Trump says he did not sanction Chinese officials further over the detention of Muslims in Xinjiang as he was in the “middle of a trade deal”.

Mr Trump told the Axios news site that achieving a “great” deal meant he could not impose “additional sanctions”.

China has held about a million Uighurs and other ethnic groups in camps in Xinjiang for indoctrination and punishment but denies mistreating them.

The issue arose after allegations in a book by ex-Trump aide John Bolton.

Mr Bolton had alleged that at a summit last year Mr Trump gave Chinese President Xi Jinping the green light on building the camps in its western region, with the US leader saying it was “exactly the right thing to do”. Mr Trump denies the allegation.

What did Mr Trump tell Axios?

The president’s comments were made in an interview last Friday, which was then published by the US news website on Sunday.

Axios says that when Mr Trump was asked why he had held off imposing further sanctions on Communist Party officials over the issue of the camps, he said: “Well, we were in the middle of a major trade deal.

“And when you’re in the middle of a negotiation and then all of a sudden you start throwing additional sanctions on – we’ve done a lot. I put tariffs on China, which are far worse than any sanction you can think of.”

Asked why he did not use the Global Magnitsky Act – passed by Congress in 2016 to counter human rights violations – Mr Trump said “nobody’s mentioned it specifically to me with regard to China”.

Axios also pressed Mr Trump on the allegation from Mr Bolton, his ex-national security adviser, that he had asked President Xi to help him win re-election by buying agricultural produce from US farmers.

“No, not at all. What I told everybody we deal with, not just President Xi, I want them to do business with this country. What’s good for the country is good for me.

“But I don’t go around saying, ‘Oh, help me with my election.’ Why would I say that?”

TOP platform can help you to find those clients and sell the work. This is one of the best websites photographers use to sell their work online. It is very easy to get signed up with TOP and it is a space where photographers can try to make money online and gain a lot of new exposure around the world for their photography work.