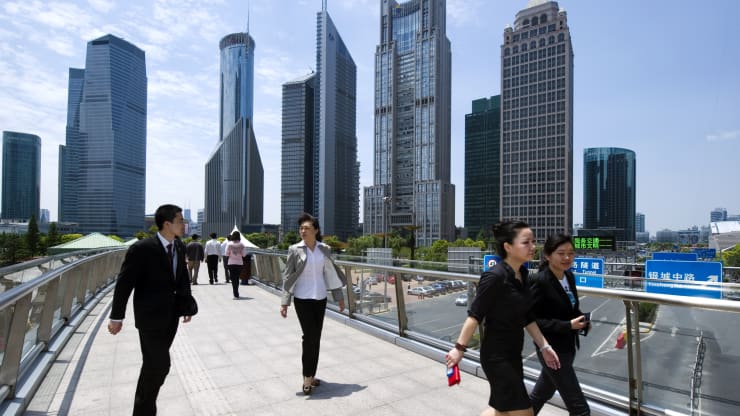 As China grapples with rising unemployment and slowing growth, some say a needed economic boost could come from new business approaches to hiring.

The systemic challenges run deep. In one indication, a Chinese reality TV show featuring female contestants in their 30s to 50s jumped to the top of the charts after premiering last month. The show — “Sisters Who Make Waves” — and its stories of women who want to prove age is just a number resonated with many viewers, whose careers can run into obstacles from structures that often prefer younger, or male, employees.

Some job listings in China also still go so far as to say applicants must be younger than age 30, or 35. If those requirements, implicit or explicit, remain unchanged, an increasing part of the workforce will be unable to find jobs. As the population ages in the next decade, the 40 to 45 category will become the largest group in China, according to UN projections compiled by the Center for Strategic and International Studies’ China Power Project.

“Companies want younger female employees because they can pay them less, work them harder and have fresh young faces around the office,” Roseann Lake, author of the 2018 book “Leftover in China: The Women Shaping the World’s Next Superpower.”

“It’s a very dangerous practice that even scares some women out of making a job change because they worry that they’re too old to find a new position and should stay put,” she said, noting that hinders career advancement and earning potential. “Failing to leverage (a highly educated female) talent pool because of heavily ingrained ageist hiring practices is a very costly mistake that will counteract otherwise very commendable progress.”

The central government has made ensuring jobs a national priority as growth in the world’s second-largest economy has slowed in the last several years. National gross domestic product shrank by 6.8% in the first quarter as efforts to limit the spread of Covid-19 briefly shut down more than half of the country.

The official, although often highly doubted, urban unemployment rate hit a record high of 6.2% in February. In addition to job losses from the coronavirus, the country is set to receive a record high 8.7 million university graduates this year.

At the highest level, Chinese authorities already recognize many of the problems that need to be addressed if the country is to keep growing steadily.

That includes better allocation of labor, the World Bank and Development Research Center of the State Council, China’s top executive body, said in a report jointly published in September. Titled “Innovative China: New Drivers of Growth,” the report pointed out three necessary changes given expected declines in the working population:

“If you’re thinking about, ‘How can we get additional productivity?’ then you need to make it possible for people to move to where the productive jobs are,” Martin Raiser, country director for China and Mongolia, and director for Korea, at the World Bank, said in a phone interview last month.

China’s official urban surveyed unemployment rate remained near historic highs in May at 5.9%. Second-quarter economic data is expected to come out next week.

Right now, businesses are very conservative about expansion, which is why there’s a need to increase demand for their products, Liu Xiangdong, deputy director of the economic research department at the Beijing-based China Center for International Economic Exchanges, said in an interview last month. That’s according to a CNBC translation of his Mandarin-language remarks.

While policy doesn’t officially allow for age requirements in hiring, it is easier for younger people to adapt to new technologies, he said. However, training for older workers can address some skill gaps, Liu said, noting government policies should also support more entrepreneurship.

On the other end of a preference for younger workers in China are some rigid bureaucratic structures that assign seniority based on age.

In 2009, Beijing-based leadership and performance coach Ranee Long said she returned to China after earning her master’s degree from Kedge Business School in France and working in management at major corporations for many years. When she approached international training and consulting companies in Beijing about a job, she said they turned her down since she was not senior enough — about 10 years short.

It was a totally different culture and systemic reality compared with the U.S., France and the U.K., said Long, whose clients have since included major Chinese and multinational companies. “Experience and potential were not enough to gain the trust and acknowledgement in China’s talent market and society.”

The International Labour Organization, a United Nations agency, said in a report last year that when a business’ work culture values individual and group differences, and has inclusive policies, the predicted probability of achieving greater profitability and productivity is 62.6%.

As businesses look for growth in the post-coronavirus environment, some say the uncertainty and changing demands from employees could provide an impetus for changing hiring practices.

“Development opportunities — more than any other factor, more than pay — is the number one reason that employees join and stay in a company in Hong Kong,“ Vicki Fan, CEO of Mercer Hong Kong, a human resources consulting firm, said in a phone interview. “Pay used to be a much higher reason for people to join.”

Just as China may still bear many aspects of a more traditional society, its developing nature can provide many unique opportunities.

“China’s actually a place where, as long as you work hard and you show you’re committed, I actually think people can move relatively easier than you could in other places,” Irene Hong, founding partner at investment bank CEC Capital, said in a phone interview last month. “I’ve seen people retool themselves. As long as you have the determination and the will, I think you can.”

And from a business perspective, Hong said the decision to put resources into an individual is made from the start. “We invest so much time and effort training people, we can’t afford to lose them just because they’re old,” she said.

Some start-ups are making better management a selling point as they try to innovate not just in their industry, but workforce systems.

Sheng Ye Capital, which counts Singapore’s state investment fund Temasek as an indirect investor, launched about seven years ago in Tianjin to sell systems for helping smaller businesses get financing in an environment dominated by state-owned banks.

China’s traditional financial industry tends to emphasize not making mistakes, which gives fintech companies like Sheng Ye a competitive imperative and edge by being more efficient and flexible, Aaron Yuan, the company’s chief strategy officer, said in a Mandarin-language phone interview, according to a CNBC translation.

In contrast to Chinese society’s emphasis on titles, Sheng Ye said its employees address each other by first names and operate in a relatively flat organizational structure. The company said 60% of its roughly 300-person workforce are age 30 and younger, with women accounting for just over half.

“Our operations will keep on expanding. … In 10 years (the current staff) will become experts in an industry, so in the future they will be the managers,” Yuan said. “So we will give our people an endless opportunity.”

For those who are unfamiliar, content marketing is powerful because it builds up an image of expertise and experience for the business being marketed in this manner, thus increasing the chances of potential customers choosing them rather than one of the other options out there. It isn’t something that will produce results in an instant, but over time, content marketing can be critical for brand building efforts.