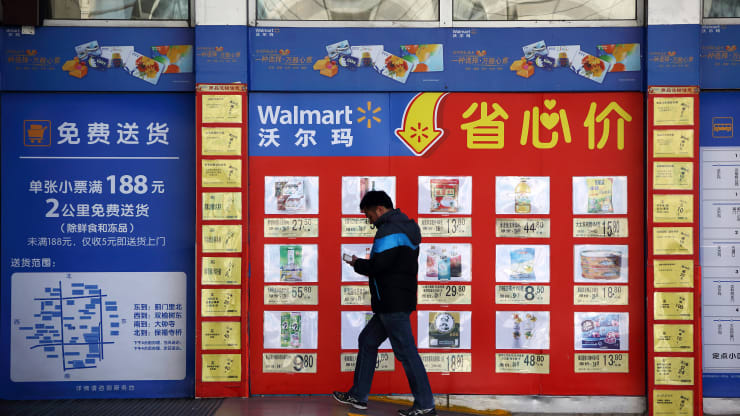 Walmart’s online shopping strategy is paying off in China, arguably one of the most developed e-commerce markets in the world.

The giant discount retailer reported Tuesday that net e-commerce sales in China grew 104% from a year ago in the three months ended July 31.

That’s a faster pace than the 97% growth posted for net e-commerce sales in the U.S. The company’s fiscal second-quarter results handily beat analyst estimates on both revenue and earnings per share.

The U.S. is still by far Walmart’s largest market, with net sales of $93.3 billion in the second quarter versus $27.2 billion for the rest of the world. Walmart does not break out net sales for China, but noted that operating income did increase for the region.

Walmart has been investing heavily in China, from opening new Sam’s Club stores to partnering with local grocery delivery platform Dada. Earlier this month, Dada announced that all of Walmart’s over 400 stores in China have been connected to the online platform, which claims to offer delivery within an hour.

The U.S.-based retail giant also had strong results from online shopping in other international markets. E-commerce grew by more than 200% in Canada, and Mexico and Central America, according to the earnings release.

Walmart took the top spot in the Fortune Global 500 list of the world’s largest companies released last week. The number of Chinese companies on the list surpassed that of U.S. ones for the first time.

Here are some of the top advantages of digital marketing in tourism. Others include 24/7 marketing of your travel packages and also the creation of brand awareness. If your country’s government wants to increase the revenues they generate from tourism, The Online Publishers “TOP” platform is the best solution.