Latest News
Home Economy Goldman Sachs sees the Chinese yuan strengthening to 6.5 per dollar over the next 12 months 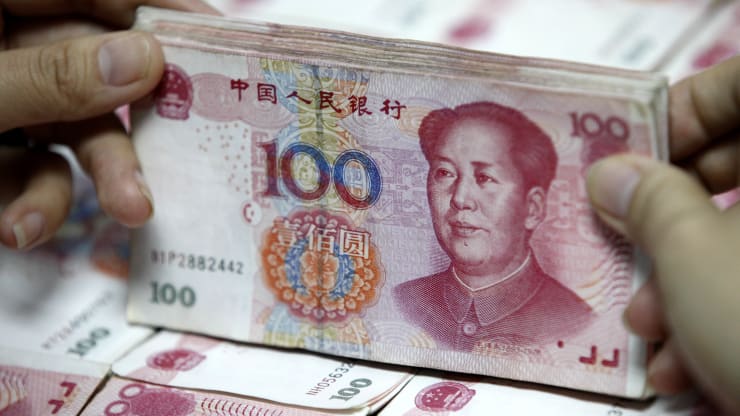 Goldman Sachs sees the Chinese yuan strengthening to 6.5 per dollar over the next 12 months

Goldman Sachs expects the onshore Chinese yuan to strengthen to 6.5 per dollar over the next 12 months, according to Timothy Moe, co-head of Asia macro research and chief Asia-Pacific equity strategist at Goldman Sachs.

“We’ve recently firmed up … in particular, our Chinese renminbi forecast from 6.7 to 6.5 on a 12 month view,” Moe told CNBC’s “Squawk Box Asia” on Thursday, adding that it was one of the firm’s “strongest views” for Asian currencies.

In comparison, the onshore Chinese yuan changed hands at 6.7767 per dollar in the afternoon of Asian trading hours on Thursday. Its offshore counterpart traded at 6.7764 per dollar.

That comes as the dollar is in a “structural period of weakening” after being quite strong over the last few years, Moe said. He added that the driver behind this phenomenon was “the loss of U.S. exceptionalism” as factors that previously propped the dollar up, such as relatively better economic growth stateside, have “gone into reverse.”

Both the onshore and offshore Chinese yuan saw a dramatic strengthening this week from levels above 6.8 against the greenback. That came as data from China’s National Bureau of Statistics showed the country’s first positive retail sales report for 2020 in August.

Moe said the strength of the Chinese currency would serve a “tailwind” for stocks in the country.

“Historical evidence is very, very clear that a strengthening currency is generally supportive for the equity market,” he said.

In particular, the more domestic-oriented parts of the market are likely to benefit as the external-facing sectors “become incrementally less competitive” against the backdrop of a stronger currency, the strategist said.

As a result, Moe said a strong Chinese yuan would tend to “tilt” one’s investment focus more toward the domestic part of the economy where the “real kind of juicy stories” — such as the rise of the digital economy, new infrastructure as well as the digitization of the consumption of goods and services —  reside.

“The (yuan) would be just an extra tailwind for those ongoing structural themes,” Moe said.

Running a successful blog in a particular niche means you are an expert in that field. You are already writing eBooks, remember! So why should you not consider branching this expertise further to become a consultant or coach? For instance, if your blog posts are all about home improvement and roofing, you could offer interior design consulting services.