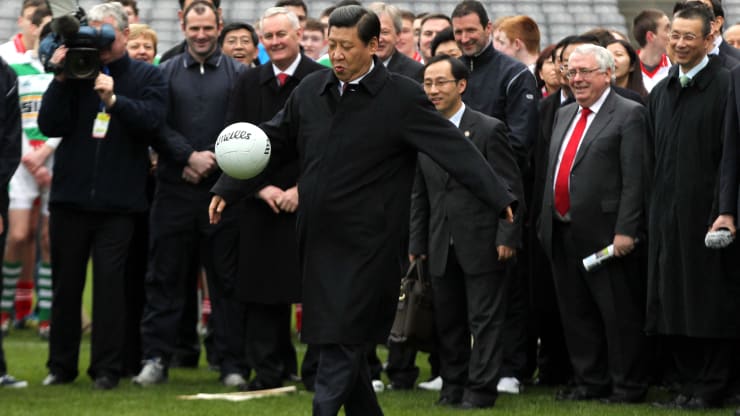 Ireland’s foreign investment rules are being updated as Dublin seeks to protect the country’s prized assets and align itself with regulations from Brussels.

Ireland’s industrial policy relies heavily on outside investment with several tech and pharmaceutical giants having headquarters in the country, attracted by the country’s 12.5% corporate tax rate and other factors.

In September, the Irish government said it would legislate for the screening of foreign direct investment, giving effect to a European Union regulation that establishes a framework for vetting and evaluating investments into the EU by third-country companies.

The EU wants to ensure greater controls over investments by outside players that may be heavily state-subsidized with an unfair competitive advantage.

Chinese companies have invested heavily in Ireland in recent years and while China has been often cited as a cause for concern internationally, the rules do not single out any particular country.

Leo Varadkar, Ireland’s minister for enterprise, trade and employment, said that FDI remains a key part of the country’s economic strategy but it needs to protect against “strategic assets falling into the hands of unfriendly foreign governments.”

Each country will shape their own rules in line with the EU framework. It will allow for Ireland to share information with the European Commission, the EU’s executive arm, and other member states about suspicious or concerning deals.

Stephen McIntyre is a partner at venture capital firm Frontline Ventures and was previously the head of EMEA at Twitter when it was setting up its Dublin headquarters. Frontline invests in U.S. start-ups and advises them on European expansion.

McIntyre told that many companies won’t be affected too adversely by screening requirements but certain sectors like cybersecurity will draw more scrutiny.

“This topic has never come up in any CEO conversations that I’ve had in the U.S. That doesn’t mean it won’t become important, but it does mean that U.S. CEOs are not aware of it,” McIntyre said.

Companies that had stalled European expansion during the pandemic will have another criteria to consider when they pick up the plans again, he said.

The Department of Business, Enterprise and Innovation published a consultation earlier this year, seeking feedback on how the laws should take shape.

Ibec, Ireland’s largest business lobby group, said in its submission that any screening must be proportional and avoid protectionism.

“Screening of completed FDI should be avoided unless there is reason to believe that the FDI was completed on the basis of erroneous information or maladministration, following specific criteria,” Ibec said.

The government itself has stated that many corporate expansions wouldn’t require any screening whatsoever.

Screening comes amid a backdrop of scrutiny of China even though the U.S. remains the largest overseas investor. According to the Rhodium Group, FDI from China into Europe declined in 2019 but the opposite is true for Ireland. Figures from Baker McKenzie show that investment from Chinese companies rose 56% in 2019 through several M&A deals and expansions — meaning the world’s second-largest economy is becoming increasingly important for the country.

“However, given the size of the Chinese economy, it has the potential to become very disruptive. Therefore we think that some instruments are warranted to handle the fact that one of our main global partners is a non-market economy.”

The U.S. has led a charge in the West against Chinese companies and a trade conflict between Beijing and Washington is still far for over. The U.S. has blacklisted Huawei and challenged the ownership of ByteDance-owned TikTok.

Huawei has faced a mixed response in Europe though. A U.K. Parliament report this month accused Huawei of collusion with China, a charge that it denies, while also staring down a ban after British phone networks were ordered to strip out its gear by 2027.

The EU on the other hand released a 5G “toolbox” earlier this year to help countries vet 5G equipment providers, but it did not single out any companies.

Jiménez and Poitiers said there will be some extra bureaucracy for companies, but a screening framework at an EU level will help avoid a patchwork of varying national rules.

Frontline’s McIntyre said that depending on how regulations are implemented, it could introduce unnecessary red tape, whether it’s in Ireland or another European country.

“They’re all good places to locate, so small differences in approach can make a difference, and so anything that increases red tape is not going to be particularly positive.”

This is a great way to quickly gain some more experience in the way of doing work relating to SEO and backlink management. If you are interested in doing this work for others, and you know how to do it well, then TOP wants you to join today. You can start offering this service to other people around the world, helping them to improve their website traffic and to boost sales.