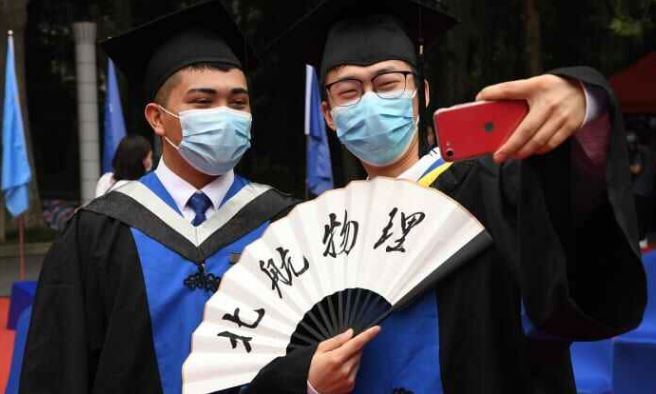 As China’s economy picks up, new university grads are still looking for jobs

As China presses on with its economic recovery from the coronavirus pandemic, new university graduates are still trying to catch up.

By official and third-party accounts, the class of 2020 — at a record high of 8.74 million students — is having a harder time finding jobs than last year’s graduates.

There’s been a clear decline in hiring by the consumer goods industry, manufacturing, software and information technology services as a result of Covid-19′s spread, according to a report on prospects for China’s new graduates. The report “University Alumni Insights: Chinese Graduate Career Development Prospects 2020” was released Thursday by LinkedIn China and Beijing-based think tank Center for China and Globalization (CCG).

On the other hand, the health care, distance learning and legal industries have been less affected by the pandemic, and the number of people they are recruiting has remained relatively stable, the report said.

In fact, the analysis found there is a shortage of talent in the transportation and logistics, media and education sectors.

Covid-19 first emerged in the Chinese city of Wuhan late last year, before spreading quickly within the country in January and February. Authorities temporarily shut down more than half the country in February.

The outbreak stalled domestically in March, but by that time, the coronavirus had spread rapidly overseas in a global pandemic. China’s economy contracted 6.8% in the first quarter. While officials are optimistic about the subsequent recovery, they remain cautious about uncertainty from the coronavirus’ continued spread abroad.

“There are certainly many higher-education graduates who are still looking for jobs, and the class of 2021 will soon enter the job market,” Zhang Ying, director of the employment promotion department at the Ministry of Human Resources and Social Security, said Wednesday, according to a CNBC translation of her Mandarin-language remarks.

Zhang said the government will continue to add policy support, including expansion of hiring by state-owned enterprises. She noted the public sector has absorbed 2.8 million of the graduates.

Earlier this month, the National Bureau of Statistics said an unspecified unemployment rate for 20- to 24-year-olds holding at least a college degree — primarily new graduates — was 4 percentage points higher in September than a year ago, despite falling slightly from August.

Overall unemployment for urban areas as measured by an official survey — which many economists doubt the accuracy of —showed the rate fell to 5.4% in September from 5.6% in August. Anecdotally, many workers have had their pay cut or deferred. The statistics bureau said late last month that many of those who lost their jobs during the coronavirus are not necessarily counted among the unemployed.

Regardless of remaining challenges, China will likely be the only major economy to grow this year, while the world overall contracts, according to predictions from the International Monetary Fund. At the same time, more restrictive policies on cross-border travel and study abroad, especially for Chinese in the U.S., is putting what was a lucrative trend into question.

The LinkedIn and CCG study looked at more than 218,000 graduates from 2014 to 2019 from 10 top Chinese universities, and found that while more than 70% chose to study abroad, of that group more than 80% returned to work in China. The study found that Huawei was the top company of choice, followed by Tencent and Microsoft.

“There will be more and more (study abroad) returnees” Miao Lu, co-founder and vice president of CCG, said in a phone interview, according to a CNBC translation of her Mandarin-language remarks. “For them to return to China to get jobs, they face lots of challenges, … although there are opportunities in new industries that have emerged since the coronavirus pandemic.”

She expects the foreign-educated Chinese will retain an edge in a China that has still expressed willingness to open up its economy further to foreign businesses. “Right now the shock is quite great for study-abroad students … but we still think going (overseas) is very important,” she said.

For many other university graduates in China, they are turning to other business trends that have emerged domestically in the wake of the coronavirus pandemic.

Delivery platform Meituan said in a report in July that for the first half of the year, 2.8% of its delivery people were fresh graduates, with 20.5% holding at least a bachelor’s degree. Of drivers overall, nearly a quarter, or 24.7%, had a degree from an institution, including vocational schools, up from 18% a year ago.

Separately, Alibaba’s logistics affiliate Cainiao said that in March and April, more than half of the managers who joined its tens of thousands of new package pick-up stations were individual entrepreneurs, including household businesses and college students. The other half transitioned from traditional courier businesses, convenience stores and other small grocery shops, the company said. Updated figures weren’t available as of October.

Station manager Yang Zhanxiang began operating a Cainiao pick-up post early last year just outside a university in the western province of Qinghai. He said Thursday that package volume has already surpassed that of last year by about 30%, and he intends to hire several students for temporary work around the Singles Day shopping holiday on Nov. 11.

Next year, Yang said he intends to open a new package station at another school, which will require more workers.

You can get started now by registering as a new user with TOP, after that you will be able to browse through the different services that the platform offers to clients. Getting through this process is very easy and fast, and soon you can access those quality tools that can boost your content placement success, and help you reach other business goals too.