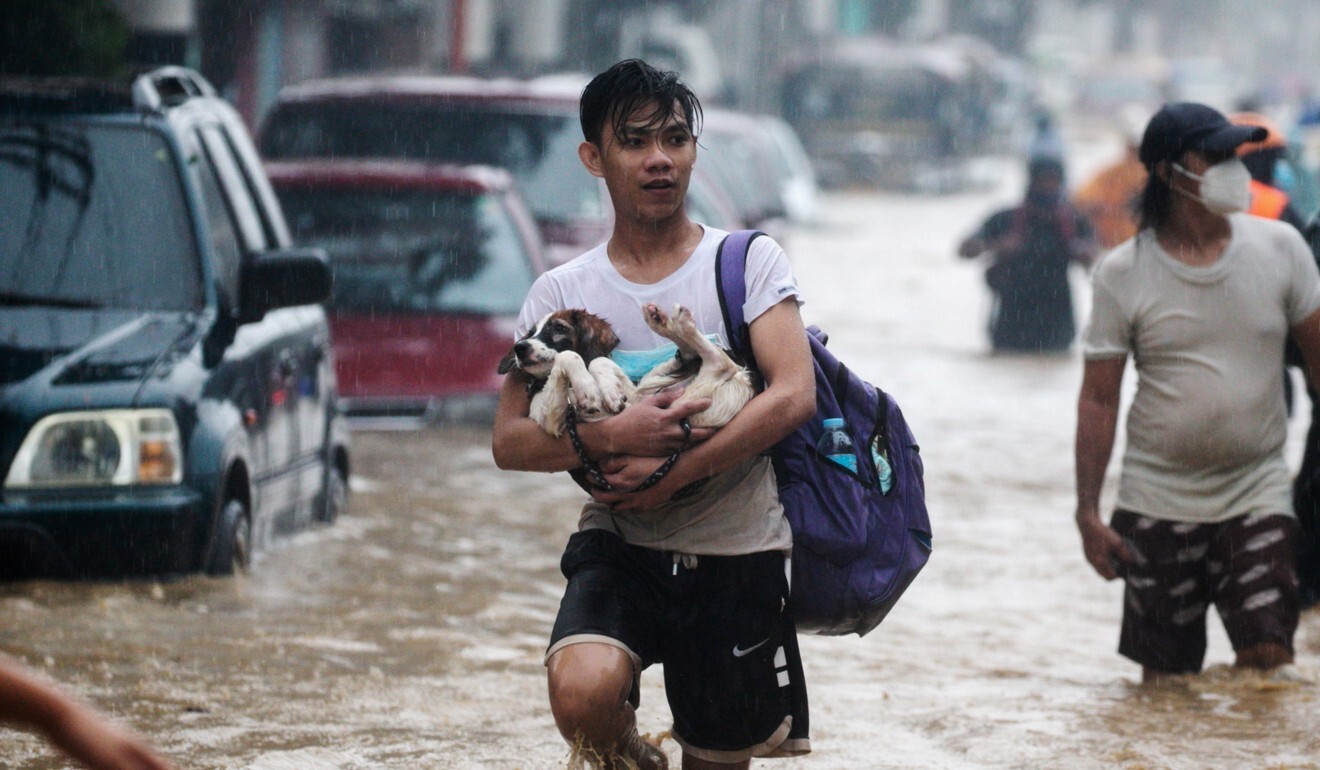 Posted By: Editoron: November 12, 2020In: NewsNo Comments
Print Email
The third typhoon to hit the storm-battered Philippines in as many weeks caused major flooding in Manila on Thursday, trapping people on rooftops and claiming at least 11 lives across the country.
Typhoon Vamco packed winds of up to 155km/h as it swept across the country’s largest island of Luzon after making landfall overnight.

“A lot of places are submerged. Many people are crying for help,” said Rouel Santos, 53, a retired disaster officer in Rizal province, next to the capital.

Santos said the flooding caused by Vamco brought back memories of the devastating Typhoon Ketsana, known in the Philippines as Tropical Storm Ondoy, that hit in 2009 and claimed hundreds of lives.

An official from the country’s Office of Civil Defence said rainfall dumped by Vamco so far was “near the volume” during Ondoy, warning flooding could worsen as run-off from nearby mountains flowed into already swollen waterways.

The Philippine Red Cross, police, military and other rescuers used boats to reach people stranded in their homes in Marikina City, one of the hardest-hit areas of the capital, where the water in some streets was up to shoulder height.

Residents who were able to escape on foot carried pet dogs, televisions, bicycles and other belongings as they waded through the murky, debris-strewn water.

“The magnitude of what we’re experiencing now is comparable to Ondoy,” Marikina City Mayor Marcelino Teodoro told CNN Philippines. “We have so many people who until now are stranded on their rooftops or trapped on the second floor of their houses. Some areas that were historically not flooded, such as the City Hall, are submerged.”

Requests for help were “pouring in”, said Casiano Monilla, Civil Defence deputy administrator for operations. He said many people had not heeded warnings to evacuate ahead of the typhoon, urging them to do so “while there’s still time”.

“I didn’t expect it to be like this,” said Rosalinda Opsima, who fled her home with her husband after the fast-rising water caught them by surprise.

Schools, which have been empty since the start of the coronavirus pandemic in March, are being used as emergency shelters along with gymnasiums. Around 180,000 people were in evacuation centres, Civil Defence said.

A man carries a dog as he evacuates from a flooded community in Marikina, Metro Manila. Photo: Reuters

The weather service warned of life-threatening storm surges along parts of the coast, includdeing in Manila, that could inundate low-lying areas. Flood warnings were also issued for a number of towns north of the capital as authorities released water from fast-filling dams.

Red Cross chief Richard Gordon said he hoped “the worst is over” as Vamco moved across the South China Sea and people started to return home.

The Bicol region, which Vamco grazed before making landfall, was hit by powerful winds and heavy rain on Wednesday as the eye of the typhoon neared the disaster-prone archipelago.

The area is still reeling from deadly typhoons Molave and Goni, which killed dozens of people and destroyed tens of thousands of homes.

Swathes of Bicol remain without power and with only limited or no telecommunication services after Goni – the most powerful typhoon so far this year – toppled power lines, flattened houses and flooded roads.

President  Rodrigo Duterte said in a statement the government was “on top of the situation”, pledging relief funds, goods and shelter for victims as well as post-disaster counselling.
The Philippines is hit by an average of 20 storms and typhoons every year, which typically wipe out harvests, homes and infrastructure in already impoverished areas. It is particularly affected by climate change with many people living in coastal areas that are vulnerable to storm surges engorged by rising seas and severe flooding.