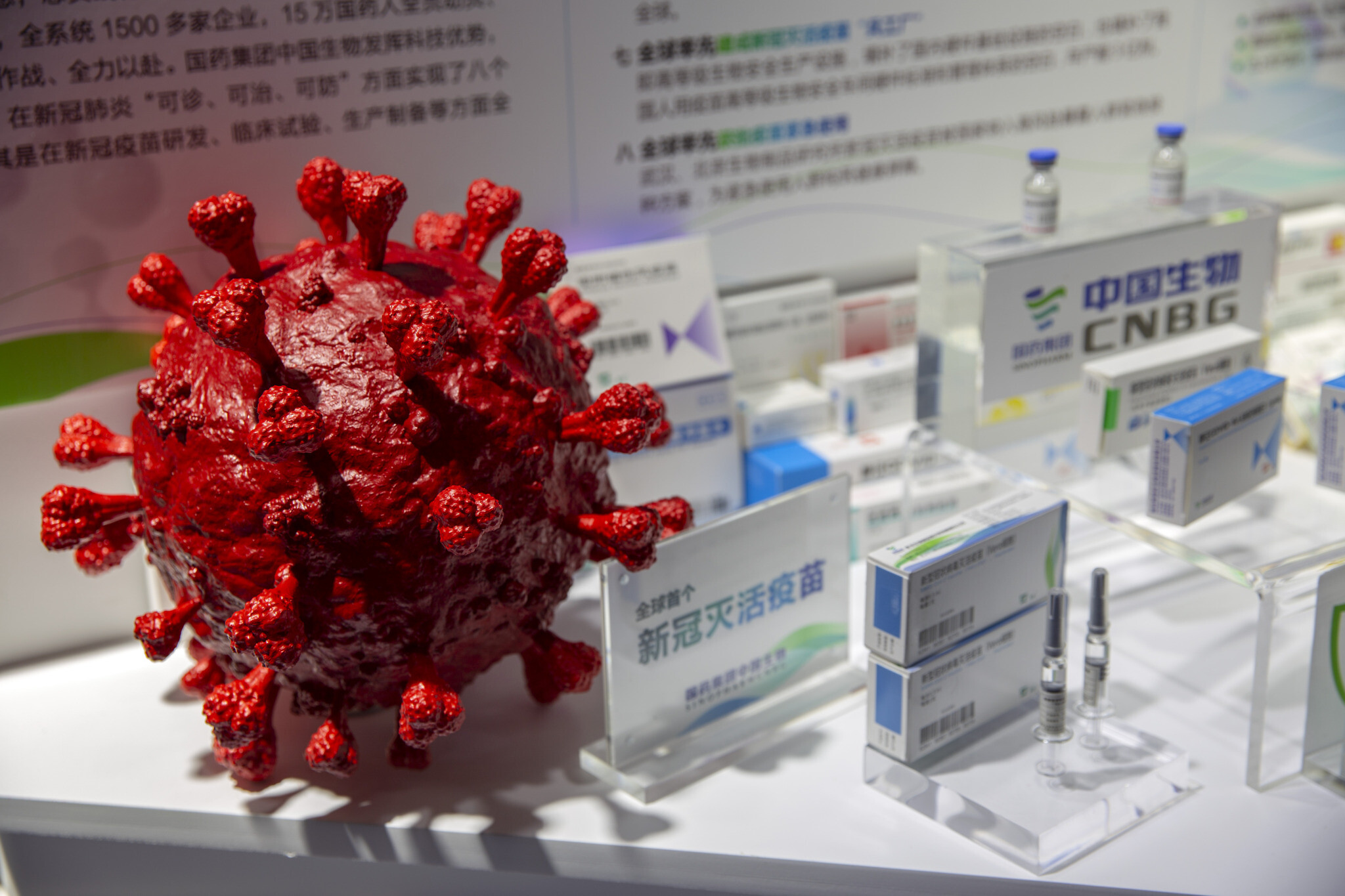 A model of a coronavirus is displayed next to boxes for COVID-19 vaccines at an exhibit by Chinese pharmaceutical firm Sinopharm at the China International Fair for Trade in Services (CIFTIS) in Beijing, Saturday, Sept. 5, 2020. China said Friday, Oct. 9, 2020, that it is joining the COVID-19 vaccine alliance known as COVAX. (AP Photo/Mark Schiefelbein)

The figure was announced by the UAE Ministry of Health via state news agency WAM, detailing an “interim analysis” conducted by Sinopharm’s China National Biotec Group (CNBG). The Gulf state of 10 million began Phase 3 human trials of the experimental vaccine in July, and in September approved its emergency use for health workers.

“The registration of this vaccine is a decision in response to the application from Sinopharm CNBG. The announcement is a significant vote of confidence by the UAE’s health authorities in the safety and efficacy of this vaccine,” the health ministry said Wednesday, without elaborating on what “registration” meant. The vaccine itself was developed by CNBG’s Beijing Institute of Biological Product.

The Phase 3 trials included 31,000 volunteers across 125 nationalities, the ministry said, highlighting the UAE’s diverse and large expatriate population — comprising roughly 90% of the country’s total population — as an advantage in carrying out human tests. The volunteers, between the ages of 18 and 60, took two doses of the vaccine over 28 days.

The announcement was thin on details, however; it did not elaborate on the parameters of the trials like how many patients were given the vaccine dosage versus placebos, and did not mention any side effects experienced by patients.

After citing the 86% efficacy figure, the ministry said: “The analysis also shows the vaccine to have 99 percent seroconversion rate of neutralising antibody and 100 percent effectiveness in preventing moderate and severe cases of the disease.” Seroconversion is the process by which an antibody becomes identifiable in a patient’s blood.

It added that “the analysis shows no serious safety concerns.”
It is unclear how the 86% efficacy figure was calculated.

Dubai ruler Sheikh Mohammed bin Rashid al Maktoum in early November reported that he received the trial vaccine, shortly after the UAE’s Minister of Foreign Affairs Sheikh Abdullah bin Zayed al Nahyan received it, both tweeting images of themselves being vaccinated and praising the work of the medical workers behind the effort.