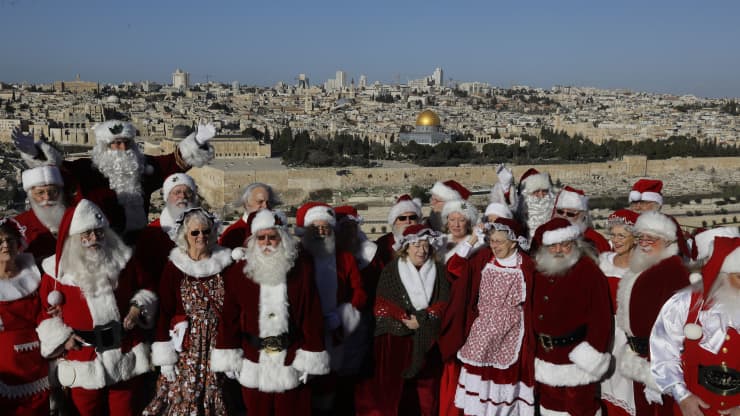 Famous Christmas destinations around the world from home

For people staying safely at home this holiday season, new virtual tours let anyone with an internet connection tour famous Christmas destinations around the world.

Homebound travelers can book live interactive tours with local guides to learn about everything from the religious sites of Jerusalem to the department store displays of New York City.

In April, Airbnb launched its Online Experiences virtual program as “a new way for people to connect, travel virtually and earn income during the Covid-19 crisis,” according to the company’s website. Sessions are live, interactive and limited to small groups.

Canadian tour company ToursByLocals started live virtual tours last spring after international borders started closing as a result of the Covid-19 pandemic. Of its more than 30,000 tours, 150 are now virtual.

“The idea was to provide our avid travelers with an opportunity to take their mind on a journey while remaining safe and socially distanced at home,” said Paul Melhus, CEO and co-founder of the firm.

Virtual travelers can see the city of Stockholm without braving the temperatures of a Scandinavian winter night.

A live, one-hour evening tour takes armchair travelers to see the Christmas lights of Sweden’s capital, the picturesque alleys of Stockholm’s Old Town and prominent historical buildings, such as the Parliament House and Royal Palace.

For around $120, up to 10 people can join via the tour booking link, allowing friends and family members to explore Stockholm together from the safety of their own homes.

For those who have dreamed of seeing the beauty of the Big Apple in December, this live 90-minute virtual tour takes people to some of the most famous holiday sites in the city.

Licensed tour guide Ibrahima Diallo explores the city by foot, and car if required. He told CNBC’s Global Traveler that he can cover two of the following locations in one tour:

Though he said it depends on how many people join and the time of the tour, Diallo suggests choosing the first two options, or the last two, to maximize time.

The tour can be shared with up to five friends and costs around $125.

On this tour, travelers can join “a wonderful Christmas fairytale tour” to see the beautifully-lit historical buildings of Vienna.

While seeing the Vienna State Opera, the city’s Imperial Palace and the popular shopping streets of Graben and Kohlmarkt, a local guide explains Austrian Christmas traditions, including the annual visit by the “Christkind,” or Christ child, who brings presents to children at Christmas. Santa Claus is, in fact, a controversial figure in Austria for encroaching on the country’s gift-giving tradition.

The tour, which is nearly sold out, costs around $88 and can be shared with up to six people.

Salzburg for the serious traveler

For those who care more about in-depth information than seeing a city’s sites via live stream, there’s this tour of Salzburg, Austria.

From her home, the guide who has lived in Salzburg for more than 20 years, teaches tourists about Austrian history and Christmas traditions, including its famed Christmas markets and the city’s connection to the song “Silent Night, Holy Night.”

The tour, which includes photographs, videos and live music, costs around $190 and can be shared with up to five people.

For $39, virtual travelers can journey into the Jewish Quarter of Jerusalem in a real-time guided tour that starts at the Zion Gate, one of the ancient gates leading into the Old City.

The tour proceeds through the narrow alleyways of the Jewish Quarter and ends at the Western Wall where, following the centuries-old prayer custom, the tour guide can “put a message for you in the stones,” according to the booking site. It’s estimated that more than 1 million notes are left in the crevices of the Western Wall every year.

Tours are 1-1.5 hours long and include stops at the Sephardic Synagogues and the Cardo, an ancient Roman thoroughfare that served as the city’s main street some 1,500 years ago.

Starting from the Mount of Olives, tour-goers can take in a live panoramic overview of Jerusalem’s Old City from the comfort of home.

Conducted by Zoom, this live tour ventures down the mountain, stopping at various churches and religious sites along the way, before reaching the Garden of Gethsemane, where Jesus was said to have prayed before his arrest and crucifixion.

This tour, also $39, and the tour of Jerusalem’s Jewish Quarter above, are conducted by Israeli tour operator Gold Carpet Tours.

Gather the kids for a chat with Santa from his Lapland home in Rovaniemi, Finland.

The kids can ask questions and listen to Santa talk about his elves, Mrs. Claus’ cooking and his 400 years of experience delivering gifts around the world. To see more of the area, the kids can then tune into a live stream of Rovaniemi’s “Santa Claus Village” for free.

Group and private bookings are available, though time slots before Christmas are selling out fast.