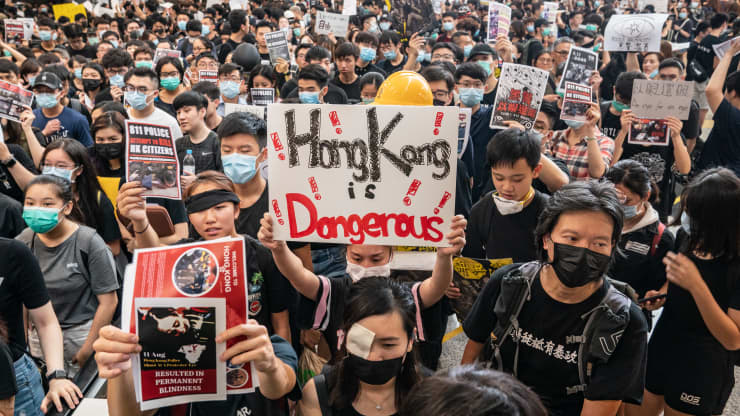 China on Thursday tried to draw parallels between the U.S. riot on Capitol Hill and pro-democracy unrest in Hong Kong that took place two years ago.

Chinese state media avoided sharing too much opinion on the news, though state-backed tabloid Global Times showed photos of the chaos in both riots and highlighted what it said was a discrepancy in media coverage for both.

In response to the U.S. riots, China’s Foreign Ministry spokesperson Hua Chunying compared the mobs on Capitol Hill with protests in Hong Kong in 2019, which saw large crowds storm and vandalize the legislative building in the Chinese city.

At the daily media briefing, she pointed to U.S. media descriptions of the D.C. riots as “violence” and a “disgrace,” and compared them to remarks made by U.S. Speaker Nancy Pelosi who once called the Hong Kong protests a “beautiful sight to behold.”

China’s Foreign Ministry urged “people to reflect on why some people and media in US gave different narrative on social turmoil in Hong Kong in 2019,” Global Times said in an English-language tweet.

On Wednesday, police in Hong Kong arrested more than 50 pro-democracy individuals for their alleged violation of a new national security law, saying that they participated in an unofficial vote last year.

Beijing enacted the national security law last year as it tightened control on Hong Kong in the wake of large-scale protests that turned increasingly violent.

Be one of many wealthy individuals to discover how great it is to live in and open bank accounts in Vanuatu.  There are many reasons to move to Vanuatu.  However, if you choose not to, you are still welcome to have a bank account or two there.  #topcompanyformation.com