Latest News
Home News HEALTH AND SCIENCE Japan has found a new Covid variant. Here’s how it compares to virus strains in the UK, South Africa 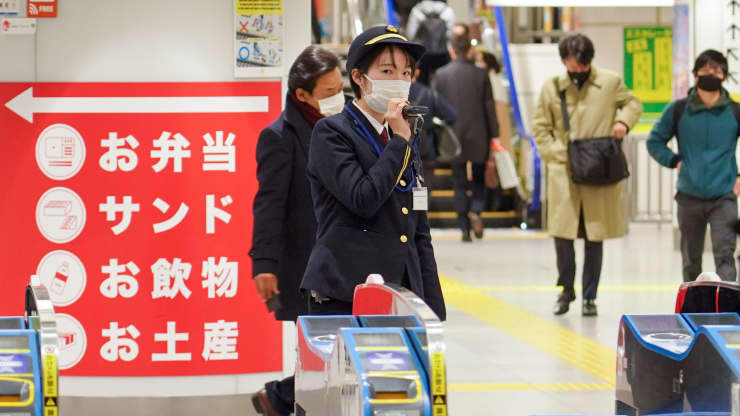 HEALTH AND SCIENCE Japan has found a new Covid variant. Here’s how it compares to virus strains in the UK, South Africa

Japan’s National Institute of Infectious Diseases on Sunday said it had detected a new variant of the coronavirus in four travelers arriving from Brazil.

The newly discovered mutant strain of Covid-19 was found to share some of the mutations in common with those of concern for increased infectivity, the institute said, referring to highly infectious variants recently discovered in the U.K. and South Africa.

However, at this time any information about the new variant is limited to its genetic makeup, the NIID said. The institute added it is difficult to immediately determine how infectious the new strain is and the effectiveness of vaccines against it.

The World Health Organization has been contacted to confirm whether it has been informed about the new mutant strain of the virus. The United Nations health agency was not immediately available to respond on Monday morning.

Japan’s identification of a new variant of the virus comes as countries scramble to contain two other contagious strains that have emerged in the U.K. and South Africa. Public health experts have expressed concern the fresh variants could pose a threat to inoculation efforts.

To be sure, while the strains discovered in Britain and South Africa spread more easily, there is no clear evidence of the mutated viruses being associated with more severe disease outcomes. But being more transmissible means additional people can get infected, and this could mean more serious infections and added fatalities.

In recent weeks, optimism about the mass rollout of Covid vaccines appears to have been tempered by the resurgent rate of virus spread worldwide.

What do we know about the new variant?

One male in his 40s, who was found to be asymptomatic on his arrival in Japan, was hospitalized as his respiratory condition worsened. One female in her 30s reported a sore throat and headache, one male aged between 10 and 19 recorded a fever and one young woman over the age of 10 was asymptomatic.

The variant of the virus discovered in Japan belongs to the B.1.1.248 strain and has 12 mutations in the spike protein, the NIID said.

What about the strains discovered in the UK and South Africa?

On Dec. 14, health authorities in the U.K. reported a variant to the WHO identified as SARS-CoV-2 VOC 202012/01. It is unclear how the new strain originated, but preliminary findings have determined it is highly transmissible.

It initially appeared in southeast England, but within a few weeks, the variant of the virus had already started to replace other virus lineages in some areas of the country.

A nurse adjusts her PPE in the ICU (Intensive Care Unit) in St George’s Hospital in Tooting, south-west London, where the number of intensive care beds for the critically sick has had to be increased from 60 to 120, the vast majority of which are for coronavirus patients.
Victoria Jones – PA Images | PA Images | Getty Images

The U.K. is struggling to contain the spread of the virus, with already stressed health facilities under increasingly intense pressure nationwide. As of Dec. 30, the VOC-202012/01 variant had been reported in 31 other countries and territories worldwide.

Separately, national authorities in South Africa on Dec. 18 announced the detection of variant 501Y.V2. The WHO said routine sequencing showed this strain had largely replaced other SARS-CoV-2 viruses circulating in the Eastern Cape, Western Cape and KwaZulu-Natal provinces by mid-November.

Preliminary studies have shown the 501Y.V2 variant also has increased transmissibility, but there is no clear evidence to suggest it is associated with worse disease outcomes. As of Dec. 30, it had been reported in four other countries.

What is the situation in Japan?

On Thursday Japan declared a state of emergency in the greater Tokyo area after a record number of Covid cases were reported in the country’s capital city.

A woman wearing a face mask walks under a row of gates at Hie Shrine in Tokyo on January 7, 2021.
PHILIP FONG | AFP | Getty Images

As he announced the new restrictions, Japanese Prime Minister Yoshihide Suga said, “The situation has become increasingly troubling nationwide and we have a strong sense of crisis.” He added the measures were necessary to tackle an “increasingly troubling” third wave of infections.