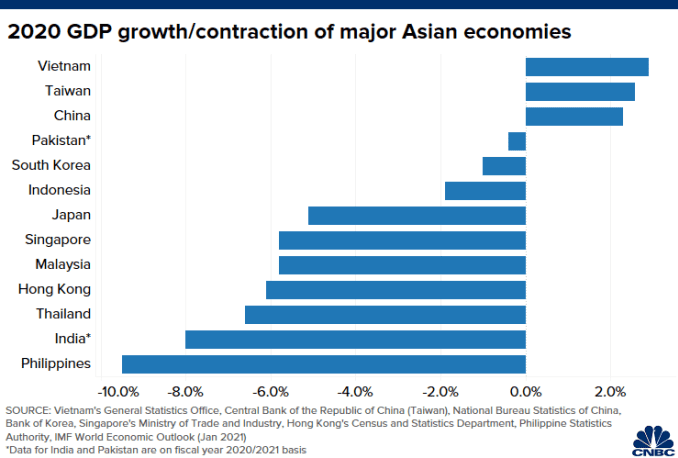 SINGAPORE — Vietnam is likely the top-performing Asian economy in 2020 — a feat that was achieved without a single quarter of economic contraction at a time when many economies globally were weighed down by the coronavirus pandemic.

Not every Asian economy has reported fourth-quarter and full-year economic numbers. But estimates compiled by CNBC from official sources — where available — and institutions such as the International Monetary Fund showed Vietnam outperforming all its regional peers last year.

The Vietnamese economy grew 2.9% last year from a year ago, according to government estimates released in late December. That’s better than China’s forecast-beating 2.3% growth during the same period.

“With this performance, Vietnam has delivered one of the highest growth (rates) in a year where the rest of the world were in deep recessions,” economists from Bank of America Global Research said in a report this month.

Some economists have over the past years questioned the veracity of Vietnam’s gross domestic product (GDP) data. Nevertheless, many economists appeared to be optimistic that the country’s economic growth will accelerate this year.

Here’s a look at how Vietnam became the top-performing economy in the region, and what lies ahead for the country.

Despite neighboring China — where Covid-19 was first detected — Vietnam has reported just over 1,500 infections and 35 deaths as of Tuesday, according to data compiled by Johns Hopkins University.

The country’s handling of the virus outbreak was internationally hailed as a model for other developing nations to follow, and helped its economy to continue growing throughout 2020.

That strong economic run will likely continue this year, said the Bank of America economists.

The bank forecast the Vietnamese economy growing 9.3% in 2021 — a much higher growth rate than the 6.7% expansion projected by the World Bank.

Vietnam’s manufacturing sector was widely credited for the economy’s outperformance last year, with production growing on the back of steady export demand. That’s a trend that will persist in the coming years, said economists.

“Considering that Vietnam has been a major beneficiary of the supply chain relocation/diversification trend out of China over the past several years, we see large scope for growth in Vietnamese exports in the years to come,” Fitch Solutions said in a December report.

The Southeast Asian country has also inked several new trade agreements — such as with the U.K. and European Union — which could further boost trade flows, the consultancy added.

One potential threat to the growth in Vietnam’s exports — and therefore its overall economic outlook — is sanctions by the U.S., said Gareth Leather, senior Asia economist at Capital Economics, in a report this month.

Former President Donald Trump’s administration in December labeled Vietnam a currency manipulator. That would allow the U.S. to take punitive actions such as tariffs on imports from Vietnam.

But analysts from Australian bank ANZ said they don’t expect any immediate actions from the U.S., partly because President Joe Biden’s administration “may not take as hard a line on the matter as under President Trump.”

Vietnam’s services sector, which was badly hit in the pandemic, picked up toward the end of 2020.

Economists said the extent of the recovery in services — especially in tourism — will determine how quickly Vietnam’s economy will return to its pre-pandemic path.

Leather described the outlook for tourism as “poor.” Still, his forecast of a 10% growth for Vietnam this year is one of the most optimistic in the market.

“By the end of 2021, we think GDP will be only 1.5% lower than it would have been had the crisis not happened. This is one of the smallest gaps in the region,” he wrote.

“The poor prospects for the tourism sector will continue to delay a full recovery, and is the main reason we expect a small output gap to persist.”

Have you thought about opening a branch office of your company in the United States?  With such a sprawling and vast country, you need not stop at one branch office.  Find out how easy this can be at #topcompanyformation.com