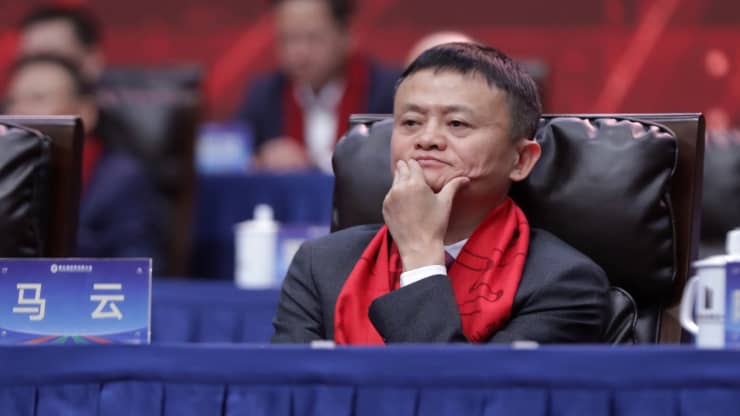 GUANGZHOU, China — Jack Ma, Alibaba’s high-profile founder appears to be on the wrong side of the Chinese government, sparking a chain of events that has upped regulatory scrutiny on the e-commerce giant and cast uncertainty over its future.

Even after Alibaba reported December-quarter earnings above expectations, analysts and experts have warned that Ma’s friction with Beijing could hurt growth.

“Investors are looking at Alibaba with a much more careful eye after having been attracted by the growth story and the founder’s global profile,” Rebecca Fannin, author of “Tech Titans of China,” told CNBC by email.

“The current frictions are a new reality for investors who may not have carefully considered how the company’s rise as a powerful tech titan could be a threat to the status quo.”

It began in October when Ma made some negative comments about Chinese financial regulators just days ahead of the initial public offering (IPO) of Ant Group in Shanghai and Hong Kong, which would have been the world’s biggest. Ma also founded Ant Group and Alibaba owns about a third of the company.

Regulators effectively pulled the plug on the IPO two days before it was set to take place. Ant cited “significant issues such as the changes in financial technology regulatory environment” for the cancellation.

But the episode has pushed regulators to hone in on Alibaba’s broader business. In December, China’s State Administration for Market Regulation (SAMR) opened an investigation into Alibaba over monopolistic practices.

Ant Group is working on a “rectification plan” while Alibaba said it will cooperate with regulators on the anti-monopoly probe.

This chain of events has also increased the tension between Beijing and Ma. He had been laying low since his comments in October but briefly reappeared in a video for his charitable foundation in January. On Tuesday, however, Reuters reported Ma was left off a list of Chinese entreprenuerial leaders published by state media, in a further snub to the billionaire.

There are two major concerns now. First, that Ant Group could be forced to restructure and even scale back some of its businesses like lending which has driven its growth. Such moves could seriously slash its valuation. The second concern is whether regulators might force Alibaba to break up or change parts of it core commerce business, which is its biggest profit driver.

“For now the greatest risk seems to be around investors’ confidence in the Alibaba brand and ecosystem,” Neil Campling, head of tech, media and telecom research at Mirabaud Securities, told CNBC by email.

“But if there is tighter regulation for the core drivers of the Alibaba platform then it could certainly stunt the growth of Alibaba. After all innovation and intricate weaving of the different aspects of the ecosystem combine to bring economies of scale and growth.”

Campling has a long-term buy rating on Alibaba’s stock.

Fannin believes Ma’s friction with Beijing will “ease up” but it will take some “agility on Alibaba’s part to deal with government pressure, changing consumer needs in a digital economy, and investor concerns.”

But some analysts and investors remain bullish.

Mizuho increased its price target on the stock from $270 to $285 on Tuesday saying the “stock (is attractive with the regulatory overhang mostly priced in.”

Matthew Schopfer, head of research at Infusive, an asset manager which is invested in Alibaba, said that the recent concern around the tech giant “will prove to be noise for the long-term investor.”

“Alibaba is a leading example of China’s technological capabilities and we do not expect the government to permanently damage the business. Additionally, heightened regulation will only further entrench the scale players like Alibaba”.

“When we get to the other side of these regulatory headwinds, we think the market will again focus on Alibaba and its platforms as a critical part of the Chinese consumer’s everyday life and a major beneficiary from growth in Chinese spending power and the increasing digitalization of consumption.”