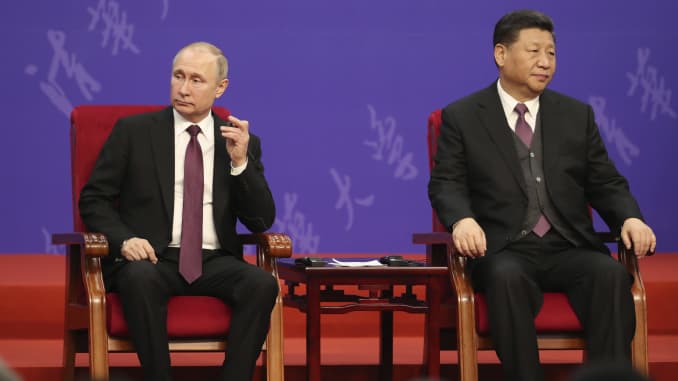 U.S. enters NATO meetings as China and Russia threats loom and war in Afghanistan drags on

Secretary of Defense Lloyd Austin will meet with members of the world’s most powerful military alliance on Wednesday for the first time since joining the Biden administration.

NATO meets Wednesday and Thursday to discuss an array of challenges facing the 30-member group. The virtual meetings will be a glimpse into President Joe Biden’s foreign policy agenda and comes on the heels of his calls to stand “shoulder to shoulder” with America’s closest allies.

“When we strengthen our alliances we amplify our power as well as our ability to disrupt threats before they reach our shores,” Biden said during a speech at the State Department. “America cannot afford to be absent any longer on the world stage,” he added.

Under former President Donald Trump, Kay Bailey Hutchison served as the connective tissue between Washington and the alliance in her role as the U.S. Ambassador to NATO.

“There was never a rift or tension among the ambassadors and me,” she told CNBC when asked if the alliance was impacted by Trump’s approach.

“Now, that’s not to say that some of the allies weren’t upset with what the president had said or done on a given day. But overall we had a great relationship and always kept everyone informed,” Hutchison explained, elaborating on the wider policy goals shared by NATO members.

“I think the alliance is strong and unified and I think everyone knows that the U.S. is essential in NATO,” the former Senator from Texas said, adding that the United States will continue to take a prominent leadership role within the group.

Ahead of the virtual meetings this week, Hutchison shared what she expects will be high on the alliance’s agenda.

The tension between Beijing and Washington soared under the Trump administration, which escalated a trade war and worked to ban Chinese technology companies from doing business in the United States.

Over the past four years, the Trump administration blamed China for a wide range of grievances, including intellectual property theft, unfair trade practices and recently, the coronavirus pandemic.

Biden previously said that his approach to China would be different from his predecessor’s in that he would work more closely with allies in order to mount pushback against Beijing.

“We will confront China’s economic abuses,” Biden explained in a speech at the State Department, describing Beijing as America’s “most serious competitor.”

“But we’re also ready to work with Beijing when it’s in America’s interest to do so. We’ll compete from a position of strength by building back better at home and working with our allies and partners.”

Hutchison said that many of the issues the Biden administration looks to address with China also fall into shared interests held by the NATO alliance.

“We have been really focusing on China much more in the last two years,” Hutchison said. “When the Belt and Road initiative came out and then, of course, the crackdown on Hong Kong, Covid-19 and the lack of transparency on that, all really brought China into the NATO radar.”

Hutchison explained that the members will discuss the great power competition, which is used to describe the friction between the United States and China in shaping security practices and setting trade norms worldwide. Russia is sometimes included as an element in the power struggle.

She also said that as the Pentagon began to stand up a new military branch dedicated to space, the United States Space Force, the NATO alliance also expanded its mission and declared space a security domain.

“That was because China is doing a lot up there with satellites and artificial intelligence, and we are now having to focus on that and begin to build deterrence as best we can,” Hutchison said of the move by NATO leaders to include space in its security portfolio.

“Cyber and hybrid, of course, is another big area where both China and Russia are active,” she added.

‘There was never any let-up in NATO regarding Russia’

Like China, Biden has also said that the United States will have a different approach in dealing with Russian President Vladimir Putin.

“I made it very clear to President Putin in a manner very different from my predecessor that the days of the United States rolling over in the face of Russian aggressive actions, interfering with our elections, cyberattacks, poisoning its citizens, are over,” Biden said earlier this month.

“We will be more effective in dealing with Russia when we work in coalition and coordination with other like-minded partners,” he added.

The White House is currently reviewing other maligned Russian actions including the SolarWinds hack, reports of Russian bounties on American troops in Afghanistan and potential election interference.

“There was never any let-up in NATO regarding Russia,” Hutchison told CNBC when asked about the alliance’s approach. “And I don’t think there’ll be a change in course because I think we’ve been tough about Russia,” she added.

Hutchison said that in the wake of the poisoning of Russian opposition leader Alexei Navalny, the NATO alliance was swift to condemn Moscow’s actions.

“There was a unanimous vote of our allies calling out Russia on the Navalny issue when it was first, of course, clear that Russia had poisoned this man,” Hutchison said.

Last summer, Navalny was medically evacuated to Germany from a Russian hospital after he became ill following reports that something was added to his tea. Russian doctors treating Navalny denied that the Kremlin critic had been poisoned and blamed his comatose state on low blood sugar levels.

A still image taken from video footage shows Russian opposition leader Alexei Navalny, who is accused of flouting the terms of a suspended sentence for embezzlement, during the announcement of a court verdict in Moscow, Russia February 2, 2021.
Simonovsky District Court | via Reuters

In September, the German government said that the 44-year-old Russian dissident was poisoned by a chemical nerve agent, describing the toxicology report as providing “unequivocal evidence.” The nerve agent was in the family of Novichok, which was developed by the Soviet Union.

The Kremlin has repeatedly denied having a role in Navalny’s poisoning.

Last month, Navalny flew to Russia from Berlin, Germany where he spent nearly half a year recovering. He was arrested at passport control and later sentenced to more than two years in prison.

Hutchison also explained that the alliance will need to discuss the messy, multibillion-dollar deal between Russia and Turkey, which led to unprecedented U.S. sanctions on the NATO member.

In 2017, Turkish President Recep Erdogan brokered a deal reportedly worth $2.5 billion with Putin for the S-400 missile system.

The S-400, a mobile surface-to-air missile system, is said to pose a risk to the NATO alliance as well as the F-35, America’s most expensive weapons platform.

In short, these two big-ticket weapons systems that Turkey hoped to add to its budding arsenal could be used against each other.

Despite warnings from the United States and other NATO allies, Turkey accepted the first of four missile batteries in July 2019.

A week later, the United States cut Turkey, a financial and manufacturing partner, from the F-35 program.

In December, Washington slapped sanctions on the country.

“It’s a huge problem and it’s one that Turkey kept thinking, apparently, that this could all be worked out. But you can’t work out a Russian missile defense system in the NATO alliance and have business as usual”.

“Everyone in NATO knows it’s a problem and Turkey needs to find an off-ramp for this,” she added.