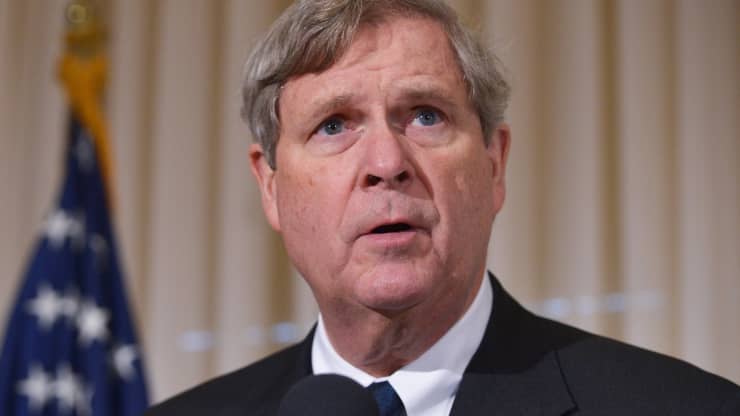 Agriculture Secretary Tom Vilsack believes China is making good on promises it made as part of the landmark phase one trade deal it signed with the U.S. last year.

Vilsack said that the deal allows for market conditions to dictate how much Beijing is required to purchase from U.S. farmers. The Covid pandemic, he added, would qualify as a material market condition that would impact how much China has to buy.

“The good news is – China seems to be living up to its responsibilities,” he said Wednesday. “The bad news is: At any point in time, because of the complex nature of the China-U.S. relationship, things can happen that might affect those purchases.”

After months of tense negotiation and a tit-for-tat tariff feud, China and the Trump administration struck a deal in January 2020 that Beijing would purchase an additional $200 billion in U.S. goods over two years. The additional purchases are supposed to be in addition to the quantity of goods and services Beijing bought from the U.S. in 2017.

Specifically, China agreed to purchase $12.5 billion worth of agricultural goods in 2020, followed by an additional $19.5 billion in 2021. The country’s purchases of U.S. soybeans and pork became of central importance during the bilateral talks throughout 2018 and 2019.

Still, some reports note that China hasn’t purchased the sums it promised before the Covid-19 pandemic, even if the rules of the trade deal allow for changes to the purchase amounts based market conditions.

In its first year of implementation, China imported $100 billion of the U.S. goods agreed to in the deal — roughly 58% of the targeted $173.1 billion for 2020, according to Chinese customs data compiled by think tank Peterson Institute for International Economics.

Still, Vilsack remained upbeat on the progress made by China.

“I think they still have a few days to be able to meet the phase one, year one goal,” he said. “Whether they meet the exact amount I think is in question in part because of the pandemic.”

Vilsack, who assumed office Wednesday, also served as Agriculture secretary under former President Barack Obama and was previously governor of Iowa. His renomination by President Joe Biden was easily approved in the Senate, which voted 92 to 7 on Tuesday to confirm the former dairy industry executive for a second term.

Earlier this month, Vilsack was grilled by the Senate Agriculture Committee on his views on U.S. trade policy and climate change. He pledged to use funds included in the Commodity Credit Corporation to seek to capture atmospheric carbon.

Vilsack is expected to attempt to tackle several challenges in the world of U.S. agriculture, including the pandemic-era rise in hunger, but a sharp drop in restaurant demand for food products.

Civil rights groups have also raised concerns about his nomination, saying alleged discriminatory practices continued at the USDA under his prior tenure.